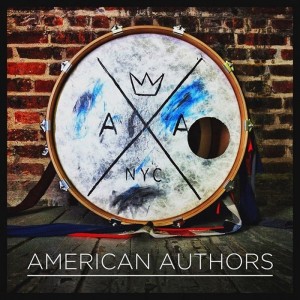 The foursome known as American Authors met at Berklee College of Music in 2006 and spent their formative years playing music all over Boston under the name The Blue Pages. In 2010, the band left Boston and made their new home in Brooklyn, and two years later changed their name to American Authors. Sound familiar? You might recognize their single “Best Day Of My Life” from a Lowe’s television advertisement here in the United States, a Hyundai ad in the United Kingdom, or the trailer for the film Delivery Man. Another track off the EP, “Hit It,” is featured on the new FIFA 14 game.

The five song EP starts off with “Believer,” the band’s first-released single under the name American Authors. This optimistic track about keeping your chin up is as upbeat lyrically as it is musically, with lead vocalist and guitarist Zachary Barnett singing, “I’m just a believer that things will get better / Some can take it or leave it, but I don’t want to let it go.” The song features a plucky acoustic guitar riff and a loop of handclaps that make the song feel alive.

The next track, the ever-popular “Best Day Of My Life,” opens with a similar riff that sounds almost a bit too akin to the intro of Imagine Dragons’ “It’s Time.” As the song continues, so does its likeness to that infamous Imagine Dragons track; Barnett’s scratchy, passionate vocals are simply accompanied by a spirited acoustic guitar riff and a pounding beat, just as Imagine Dragons frontman Dan Reynolds’ vocals are in “It’s Time.” Perhaps it is just as the saying goes, and imitation is the sincerest form of flattery. Regardless of whether or not the resemblance in the two songs is on purpose, the track is just as catchy and hard to dislike as “It’s Time.”

The following track, the plainly entitled “Luck,” is a song about self-reliance that reads like an open letter to the band members’ families about how important it was for them to chase their dreams. “Please just listen ‘cause I don’t ask for much / I am my own man, I make my own luck,” croons Barnett as he apologizes to his family for “how I up and left this town.” The lyrics are highly personal, making the song feel genuinely touching.

The track after “Luck,” however, is the exact opposite. “Hit It” is a fast-paced, old-fashioned rock song about a missed romantic opportunity with a modern twist (think Vampire Weekend’s “Diane Young” mixed with New Politics’ “Harlem”). The lyrics are complex in how they rhyme versus how quickly they are sung. Whereas “Luck” is a poignant track about following your dreams and letting the caged bird free, “Hit It” is simply lighthearted and fun.

The last song on the EP is “Home,” which showcases the band’s fondness for storytelling through lyrics. “Home” goes back to the personal touch found in “Luck,” with Barnett singing over a ballad-like accompaniment, “I’m not trying to part the ocean waves / I’m not trying to overthrow the throne / I’m just trying to find a way to make it back home.” The band even go back to their Boston roots towards the end of the song, throwing in a traditional Irish folk style bridge: “I’ve been gone for so long but my heart it carries on / As it pounds like a drum on my journey back home.”

Overall, the EP was far too short, but the five songs show quite a bit of potential. It is easy to tell from just a quick listen to any of their songs that these guys truly care about and love making music, and it’s no secret that when the band cares that much, so will their fans. Keep an eye (and an ear) out for these guys — hopefully they’re about to be much more than the soundtrack to Lowe’s commercials.