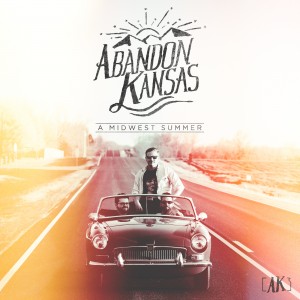 Hailing from the small Midwestern city of Wichita, Kansas, indie rock band Abandon Kansas are following up their 2012 EP Turn It To Gold with the promise of a new release. The group’s latest effort A Midwest Summer is a short three-song EP, released just at the start of summer as a precursor to a full-length expected later this year. The handful of tracks are the perfect taste of the band’s simple but timeless indie rock style. With classic-sounding guitar, easygoing vocals and lyrics, and undeniably catchy melodies, each song on the EP easily attracts any straightforward rock palate while embodying the feel of the vibrant and hot summers inherent to the Midwest United States.

Opening with short, sharp taps and the gentle echo of a melody, “You + Me + The Radio” gets you snapping your fingers from the first moment. The first track opens A Midwest Summer simply with its carefree chorus and steady guitar chords, but prepares the listener for the classic and catchy sound that Abandon Kansas never fail to produce. At the bridge, the sharper guitar strumming picks up the pace and begins to build suspense as vocalist Jeremy Spring sings, “Let’s watch the East Coast disappear, in the mirror/ Driving through the sunset, ‘til the West Coast is clear.” The last moments of the track are washed out with radio noise as the channels switch and fade out, adding a touch of finality to the first song.

“The Chase” is a faster, edgier track that brings heat like the hottest day of summer. The middle track of the EP immediately changes the pace from a softer indie style to a rougher rock rhythm, showing that the band has a wide range of sounds. The bass line rolls out over sharp guitar strumming while Spring calls out the loud chorus, which is nothing more than the simple lyric “I’m in it for the chase,” followed by a group of melodic “oh’s.”

Finally, just as twilight ends the warmth of a summer sunset, “Marching Around Me” comfortably ends A Midwest Summer with a gentler pace and a few well-placed heartfelt lines. Though it is brimming with military references, they are surprisingly well-delivered with one of the catchiest melodies of the album. Drummer Brian Scheideman pounds out a marching beat that only emphasizes the metaphor and compels you to tap your feet. Spring effortlessly sings the memorable chorus, “I’m a captive, without a rescue/ Your love’s an army marching around me/ I can’t escape this, and I don’t want to/ Your love’s an army marching around me” which smoothly ends the EP. In the concluding moments, Spring closes the song with poignant piano chords and the standalone vocals, “When you come around/ That’s when my flag comes down/ I surrender to you,” ending both the song and the EP on a hushed but heartfelt note.

A Midwest Summer is a bit of tease as it tempts the listener not only with a few addictive summer soundtracks, but also with the anticipation of a new album from Abandon Kansas. Their simple rock style doesn’t tire and the memorable lyrics will stick with you. The upcoming album could be one of the group’s best yet and will definitely be worth checking out.