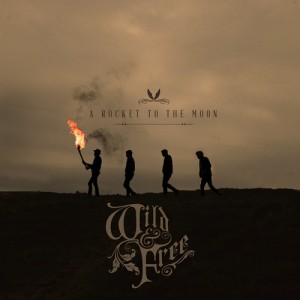 A Rocket To The Moon took a turn off the paved, pop-rock boulevard of 2009’s On Your Side onto a remote dirt road for their newest release Wild & Free. As the album title suggests, the album glorifies remaining youthful, throwing caution to the wind, and swearing puppy love will last eternally. Sound-wise, it’s much more countrified than their previous releases, although still heavily tinged with pure pop hooks. It never strays too deeply into the realm of country to scare away fans of Nick Santino’s syrupy singing, but also twangs enough to provide a breath of fresh air into the band’s repertoire.

The album  front-loads  the songs most obviously that live up to the moniker Wild & Free right away (almost to the point of clichÃ©). It launches right into “Going Out,” which feels a bit like the ideal 17-year-old desert debauchery I used to envision while trapped in my room during the winter, all the while desperately hoping life would get more thrilling soon. The song covers all the teenage bases: sneaking out, howling at the moon, driving around in the dark, and nights that feel infinite and comprise this “ideal youth” the album seems to reflect upon. Immediately after, “First Kiss” ties in the young love element, and basically the complete essence of the album has been introduced.   Santino croons, “Whenever we touch we can’t resist / We go back to our first day / Our first kiss,” and establishes the album’s pattern of reflecting on specific moments rooted in the past, always anchoring feelings in the nostalgic, vibrant milestones of growing up.

“Whole Lotta You” probably qualifies as the main guilty pleasure jam of the album, if you feel guilty for wanting to groove to some unadulterated pop. The sprinkles of infectious “sha la la” vocals, light guitar chords, and bouncy percussion add up to a groove-inducing, summertime-drive experience. Its follower, “Ever Enough,” turns up the mush on the album with the quintessential “I will always be yours / Forever and more” promise, thus rounding out the portion of the album that shows off the range of Wild & Free. From this point forward, unfortunately, many of the songs get lost in the shuffle for their repetitiveness or simplicity.

The namesake track “Wild & Free” weaves a compelling lyrical story and voices the basic struggle of growing up and becoming an individual, and “You’re My Song” propels the latter end of the compilation with its wailing guitar riffs and percussive drive, but between this solidity, the second half of the album tends to slip between the cracks. Nonetheless, the album rounds out the youthful experience and will dredge up at least one memory of last summer, last year, or teenage-hood in general, and the less remarkable songs do nothing to detract from this.

Whether listeners vibe with the turn that A Rocket To The Moon have taken toward a pop impression on light country or prefer their youthful musings without a side of the South, the old sweetness of the band still sits evident just below the surface. Their classic sentimentality still lives in the emotional recollections of years past, loves gone wrong, and loss of innocence that accompanies growing up, and this makes Wild & Free a universal album for teenagers and anyone who’s ever been one.