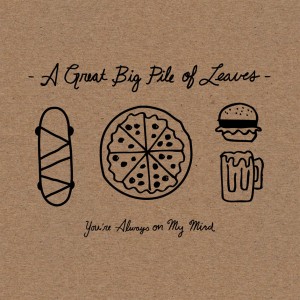 Although You’re Always On My Mind marks the second full-length release for A Great Big Pile Of Leaves, it’s the band’s first album with an outside producer (Ed Ackerson) and the musical advances shine through. The Brooklyn-based band’s newest effort covers all the topics of conversation humans seem to be afraid of addressing in our daily lives – melancholy, nostalgia, loneliness, dissatisfaction. It’s not all doom and gloom, but the honesty of the lyrics and the dissonance of many of the melodies cracks this sphere of existence wide open. You’re Always On My Mind feels like the first time you surpass the “small talk” level with someone and realize that they’re holding plenty of mixed feelings about this whole life thing within themselves, too.

The first half of the album is frontloaded with the best material. “Snack Attack” introduces smooth yet arrhythmic guitar (shout out to math rock fans everywhere) and kicks off the album’s storytelling tradition: “Late at night, you and I never work out quite right.” It provides characters for the album’s narrative and weaves them a tangled relationship, all to the punchy backdrop combination of guitars and percussion working symbiotically to support the tale.

The next standout track, “Pet Mouse,” features Justin Pierre of Motion City Soundtrack and pairs upbeat melodic energy with those aforementioned unsettled feelings to make it one of the quirkiest and most memorable songs in the collection. Its placement on the album also contrasts with its neighbor, “Slumber Party” in all of its carefree glory. It conjures images of summer midnight debauchery with a group of friends, the epitome of leaving worries behind, just when the album needs a breather from its general dissatisfaction. Don’t get too elated, though, because the next track brings the audience and narrative back to reality. In “Back To School,” the nostalgia we’ve all experienced at waving goodbye to sunshine and sleeping in late rushes to the surface. Replete with refrains like “Gonna do it different / Gonna ask you to dance / Never had the chance” make it particularly raw. There’s often nothing more painful than asking “What if?” and this song captures the essence of that low-grade yet persistent pain perfectly.

“Fun in the Sun” sticks out as the high point of the second half of the album. The juxtaposition between the title and the actual feeling of the song makes it work – it’s appropriately bittersweet with its refrain of “I’m losing it / even though I never had it.” The percussion comes to the forefront of the track to divide it into distinct sections, each with their own take on the lyrics. Similarly, “Locus of Control” depends on twangy guitar riffs to set it apart and perpetuate the premise of the album. The guitar is so integral to this portion of the album that its absence is nearly as noticeable as its presence, and listeners will find themselves waiting eagerly for it to slide back into the song.

To reiterate, the album has all the tentativeness, confusion, and relief of breaking through barriers and having a “real talk” session with someone unexpected. It feels like exploring the inside of a mind; within, listeners will find just as much solace as they find confusion, and the relatable components will inspire relief and solidarity. Sometimes, it’s nice to be reminded of the human condition. Those types of conversations may be awkward and you may wonder if you’re making enough eye contact or if the other person is thinking that it’s weird, but the bond you form beneath the surface of life is much deeper and more substantial than anything else. The end result is nearly always positive for both parties. You’re Always On My Mind has this delicate give-and-take feeling woven throughout its tracks, and although it’s not necessarily a happy job to follow the thread, it’s an ultimately fulfilling one.