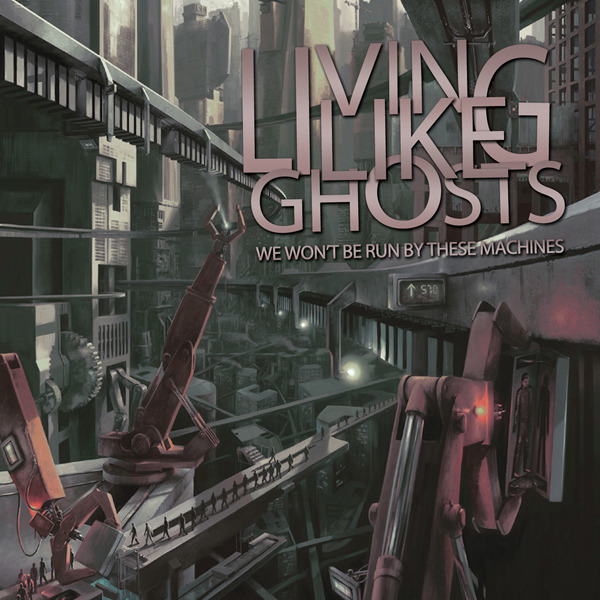 Living Like Ghosts has made a big but potentially necessary move in its hunt for rock stardom: the jettisoning of two members, including a third guitarist, from its lineup. It would be hard for any band to justify a six-string attack, and the now four-piece group from Detroit is free to roam the country in a much roomier tour van and spread its shiny pop rock tunes to audiences near and far.

The Ghosts’ debut EP, We Won’t be Run by These Machines, is a polished burst of modern rock, and the seven tracks portray a young band that knows how to write a solid song with some serious radio potential. The band members are each multi-instrumentalists that began playing early in their lives, and they come from varied musical backgrounds and inspirations. In other words, they’ve all done their homework when it comes to composition. For the group   group of guys who have all barely entered their 20s, the soaring guitars layered over drummer Chris Jenkins’ busy stick work and some impressive vocal acrobatics from singer Jeremy Johnson make for a more than impressive first release.

The band has closely followed in the footsteps of its predecessors, which may make it difficult for it to stand out from the thousands of other bands currently competing for the national spotlight. The tracks on its EP do also tend to run together, with the band employing the same general mid-tempo emo-tensity for the entirety of the album. Living Like Ghosts utilizes a plethora of run-of-the-mill “breakdowns,” but thankfully refrain from the over-the-top screams and growls that many of its peers favor. Instead, with this band the vocals are actually a highlight, even if Johnson’s Patrick Stump-style riffing is a little repetitious.

Overall, the EP makes for a nice upbeat background listen, but none of the tracks are particular standouts. While the sound is not particularly original, the songs are full, the record is well-produced, and the band could certainly blend nicely into the modern alternative music scene. However, it will take more than WWBRBTM to surpass that point. We’ll find out if that will happen when Ghosts’ second EP, “Treading Water,” comes out next month.

For now, the young band has the potential to break away from the pack and go to the next level — if it is able to find its own sound. Time will tell if the recent lineup change will be the solution, but in the meantime the group has more room to stretch out on stage. Now it just needs to learn how to stretch out its songwriting abilities.