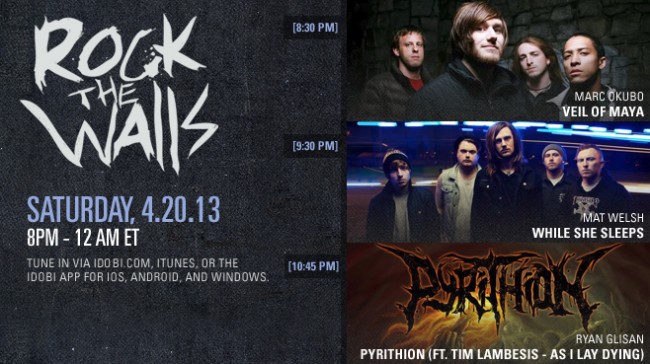 Listen to Rock The Walls Tonight at 8pmET with Patrick Walford for the latest and greatest in Pop Punk, Hardcore, and Metalcore Music!

At 8:30pmET, Marc Okubo, Guitarist of Veil of Maya is on the show. Marc talks about Eclipse, All Stars Tour, Working with Misha of Periphery on the album, and much more.

At 9:30pmET Mat Welsh, Guitarist/Backing Vocals of While She Sleeps  drops by. Mat talks about their debut album This Is The Six, Warped Tour, Touring in North America for the first time, and much more.

At 10:45pmET Ryan Glisan, Guitarist of Pyrithion joins Rock The Walls to talk about how this new project came to be with Tim Lambesis of As I Lay Dying, The Unique Writing Process for The Burden Of Sorrow EP, and much more.

As well we get to New Music from bands such as Chunk! No, Captain Chunk!, Attila, Northlane, Bring Me The Horizon, and your requests!

Listen to Rock The Walls with Patrick Walford, Tonight at 8pmET. Only on idobi Radio!