The endorphins have worn off, and Josh is just in pain… but that won’t stop him from bringing you a brand new First Person tonight. 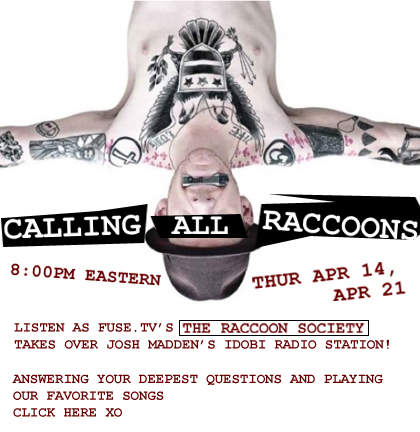 On the menu, Josh talks about his obsession for Native Shoes, tumblr, and the R&B music he would’ve had playing in the background if he had the opportunity to make out with any girls in high school.

You all should also check out The Raccoon Society blog talking about the next two episodes of First Person. Mat Devine will be co-hosting the shows on April 14 and April 21 answering fan questions and playing their favorite songs.

Head over to FUSE TV’s The Raccoon Society blog for more info.

First Person with Josh Madden airs every Thursday night at 8pm EST, only on idobi Radio.

Josh Madden is a Music Producer, Remixer, and DJ; Co-Founder of  DCMA COLLECTIVEclothing line with brothers Benji and Joel; stylist for artists such as Good Charlotte, NYLE, Pierce Brosnan, Metro Station, White Tie Affair as well as for KANGOL, BEN SHERMAN, and HOUSE OF CASSETTE clothing lines; and a writer for  nylon.com &  evilmonito.com. Josh has been featured in magazines such as PEOPLE, NYLON, TIME OUT, SPIN, PAPER, & STATUS.

First Person with Josh Madden airs every Thursday night at 8pm EST, only on  idobi Radio.