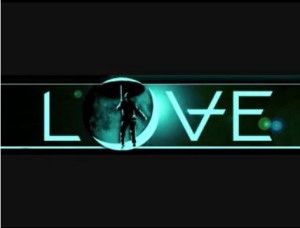 The album was made available exclusively through Fuel.tv and Modlife, a Web space managed by the band.   As Tom DeLonge  displayed with previous releases We Don’t Need to Whisper and I-Empire, the effort was a grandiose concept.   The lead vocalist and guitarist used his band mates; drummer Atom Willard, guitarist David Kennedy and bassist Matt Wachter as a conduit for the creative process.

“The album is super conceptual and highbrow in many ways, very artistic, very Stanley Kubrick, but it’s not a rock opera,” DeLonge said of the album.  “It’s a very modern version of what could happen when you blend the film industry and the music industry together in a very, very arty, kind of cool way with professionals involved all along the path.”

The obvious theme of love, in all of its incarnations, implanted throughout the lyrics and the album, was not so cleverly released during the Hallmark holiday weekend celebrating this synaptic feeling.

“Get down girls / And dance with your best friends / Show yourself and take what you ask for / Let it go, no fights on the dance floor” is a rare meandering from the normally clichÃ©d overtly serious lyrics that DeLonge, during his tenure with brainchild Angels and Airwaves, is known for.

Although these lyrical clichÃ©s can become a bit repetitive over the course of the miniature opuses that populate the track listing of Love, the orchestration is far from boring.   The familiar nasally delivery of the veteran front man is backed by a symphony of airy arrangements and rock instruments.   The overall positive feelings of the songs as well as the lyrics will lift spirits while at the same time inspire the listener.   As opposed to creating songs that start of and end with a bang, each track moves slowly towards a climax and fades to black, as does the entire record. This building of momentum lasts through the first twenty minutes and comes to a head with the songs   “Epic Holiday” and “Hallucinations.”  Beyond these songs, some excellent experimentation is presented, and the band gets especially familiar with guitar effects pedals and synthesizers.   The listener may even feel like they are listening to a record that could possibly be moving above the territory of alternative rock.

“I found out what’s wrong, and its not you or I / Or anyone else that you chose tonight / It seems like the madness of choice in the life / Has made it all clear if we run or we hide” are selected from the song “Letters to God, Part II,”  which seems to be a continuation of the existence-questioning lyrics penned on “Letters to God” by previous DeLonge project, Box Car Racer.

With Love, Angels and Airwaves channels the likes of Pink Floyd and U2.   Viewing this album at an attempt at recreating that type of sound would be incorrect, Angels and Airwaves is utilizing the spacey experimentation to expand its sound into a new realm.   (3.5/5.0)

Fans can download the album for free via Modlife.