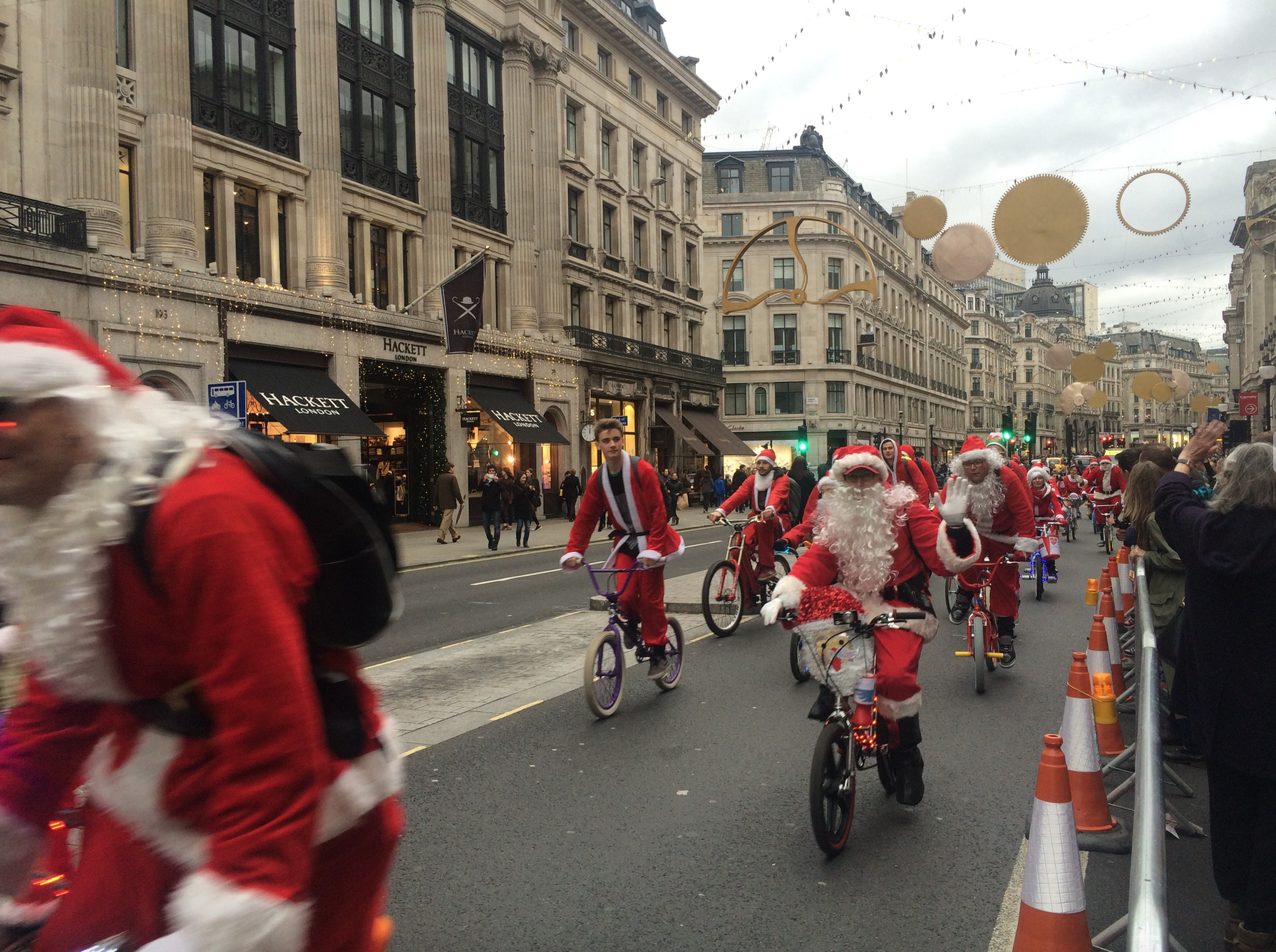 It’s a strange, strange world we live in—the idea that on the night of December 24, a large bearded man will steal into your house to watch you sleep, leave undocumented toys and candy for your children, and then drink all of your milk, is deemed err– normal (and not at all terrifying) for many of us in the West. If that is our “normal”, what else is considered a traditional cause for celebration on other parts of the planet? Turns out Santa has a squad with some of the festive favorites we’ve got on this list—so lock your doors, hide yo’ kids, and prepare to witness the weird, wild, and downright wicked winter holidays from around the globe! 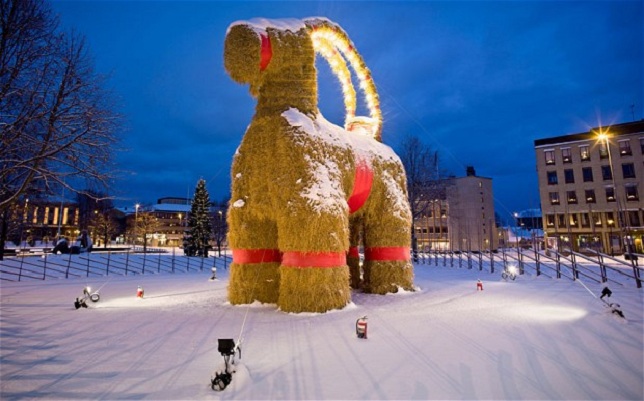 Date(s) Celebrated: Around late November to the following January

How it Started: In 1966, the people of Gävle decided to construct a giant version of the traditional Swedish Yule Goat out of straw during the holiday Advent.

What on Earth?: Despite efforts such as fire proofing, security cameras, being built near the fire station, and being guarded by actual soldiers, the Gävle goat is destroyed nearly every year before the end of the season. Out of the 50 years the townspeople have built the goat it has been destroyed 37 times—sometimes only few hours after it was built. The most common mode of destruction has been fire, both intentional and unintentional, but the goat has also been destroyed by throwing it in the river, being kicked to pieces, destroying just the legs. And people go to great lengths to participate in this tradition: like trying to steal the goat in a truck, or hacking into security cameras. Even if no one tampers with the goat, some years the elements themselves defeat the goat. One time, it caught fire in a blizzard; another time, the weather was too warm for the ice coating made specifically to protect against fire (so guess what happened). The people of Gävle have decided that the Gävle goat is destroyed so much that if it is destroyed after December 13th, they will not rebuild it. This year the goat has already been burnt down, and replaced by a smaller replica…which was hit by a car, repaired, knocked down again, repaired (again) and is at the time of writing still standing. (Eli McDonald) 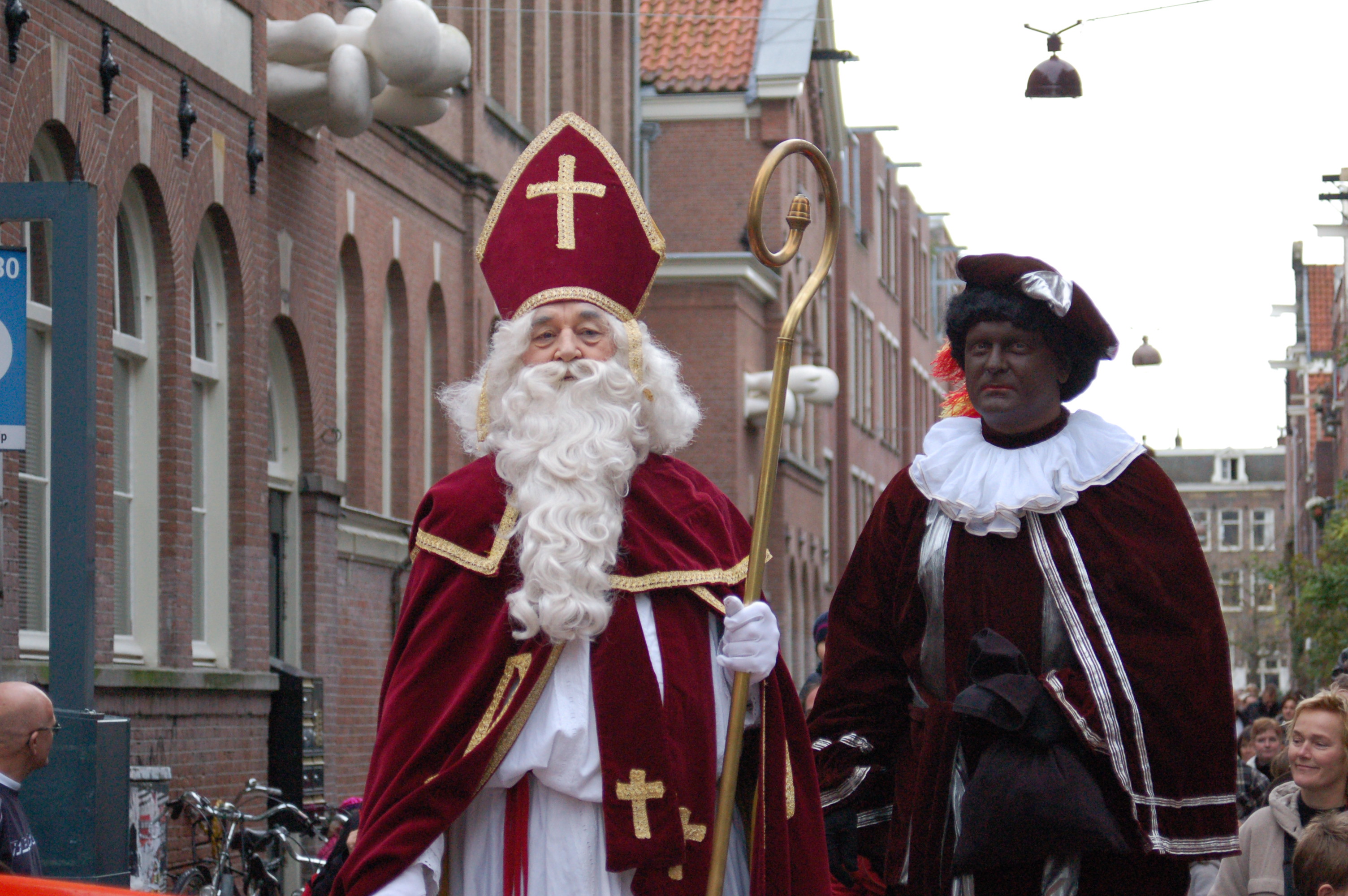 How it Started: The first illustrated appearance of Zwarte Piet was in Jan Schenkman’s 1850 book Sint Nikolaas en zijn Knecht. Pete was pictured in ragged clothes, doing chores for a seated and very regal Santa, giving credence to the theory that Pete was a freed slave. Some stories depict Pete as a scorched, devilish character that punishes children, much like the Krampus. In others, he’s a Spanish Moor. In others still, he’s an Italian chimney sweep giving out candy, and his “dark skin” is because of the soot rather than natural skin tone.

What the hell?: Somehow, I went my whole life up until about a month ago never having heard of the Dutch Christmas character Zwarte Piet, or Black Pete. On one hand, ignorance was bliss —I was much more content without the knowledge that the people of the Netherlands, plenty of whom seem like decent and intelligent folk, indulge in this nonsense around the merry season. On the other hand, burying our heads in the sand has never been an effective means to achieve social justices.

Nobody knows who Peter really is, where he’s from, if he’s good or bad, or even if he’s actually black, and nobody indulging cares because, as is the case with most Western holiday traditions, the whole thing is a big game of time-telephone. We don’t care why it’s a tradition, only that it is a tradition, and we’ll be damned if anybody is going to tear it away. As is often the case in these situations, it’s the young people, many of whom are students, who are joining forces with the black Dutch population in standing against the tradition of Black Pete.

That tradition, by the way, involves white Dutch people dressing up as Peter en masse, black face and all. Yep, in 2016 as we prepare to enter 2017, thousands of people are painting their faces black, exaggerating their lips with an overload of bright red lipstick, and donning curly wigs. A gathering of these things looks like a casting call for the worst minstrels show ever (and they were all bad).

Look, a lot of the people indulging in this crap have no idea that it’s racist. It’s simply a throwback to their childhood—a cheerful guy who hands out candy. That might seem astounding, but it’s apparently easy to get led down that path.

How It Started: Way back in the 18th Century, people would set up lanterns outside their houses on December 7, the eve of the Immaculate Conception (one of the biggest Catholic feasts celebrated in Guatemala). The poor, who couldn’t afford lanterns, would build piles of garbage and light it on fire. Eventually, the tradition came to symbolize burning all the bad from the previous year in the hopes of starting over in the new year. Like a phoenix being reborn, except worse for the environment (all that smoke from the burning garbage!).

What In the World?: Guatemalans honed this tradition, so that instead of just burning garbage, they build effigies of the devils and demons they believe lurk inside their houses, and then light them up as a way of cleansing their homes before their big feast day. In some parts of Guatemala City, mostly Antigua, they build devils that are over three feet tall only to set it on fire at the stroke of 6 in the city square, in the hopes of keeping their city free of demons (literal and figurative) for the next year. Street vendors sell mini devil piñatas for people to burn on their own, or fireworks so that others can join in the festivities. It’s similar to the British Guy Fawkes Day (“Remember, remember, the fifth of November”), but it’s more of a purification rite; basically, it’s out with the old, in with the new—in the most fiery way possible. (Sam Devotta) 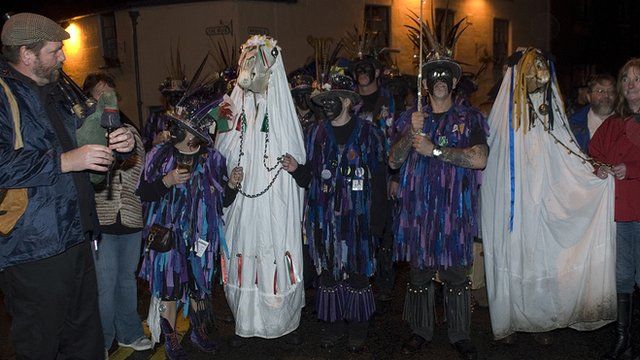 How it Started: First recorded in 1800, as a tradition performed at Christmas time.  Its supposed origins were Christian: it was once part of the festivities of the Feast of the Ass, a Biblical commemoration of Mary and Joseph’s escape to Egypt. The Mari Lwyd itself is suggested to represent the donkey Mary rode upon in the story.

What Now?: Wales is a strange and wonderful place. It’s a country where town names run over 50 letters long, and there are more sheep than humans. One can only imagine that all the rain up there has slightly transformed their idea of a good time, and this particular tradition tips a little bit on the creepy side of the fun scale. The Mari Lwyd, loosely translated as “Blessed Mary”, is a folk custom where a hobby horse—made of a horse’s skull on a pole dressed in cloth—is ridden around town. Of course one individual riding around on a fake dead horse might be seen as weird, so these…uh, brave knights(?) are accompanied by others dressed up as characters like the British pantomime puppets Punch and Judy (think “he’s behind you!” “Oh no he isn’t!”—that kind of thing). This band of what we can assume are very merry men carry the Mari Lwyd around town, where they knock on people’s doors and request entry…by singing. If they aren’t either 1. New to town and justifiably terrified or 2. Sick of this shit, the householders are expected to deny them entry (by singing back their answer, of course), and the R-rated Glee-style back-and-forth could go on for hours. If they eventually wear their (presumably disgruntled) neighbors down, they are given food and drink before galloping off into the sunset. (Alex Bear) 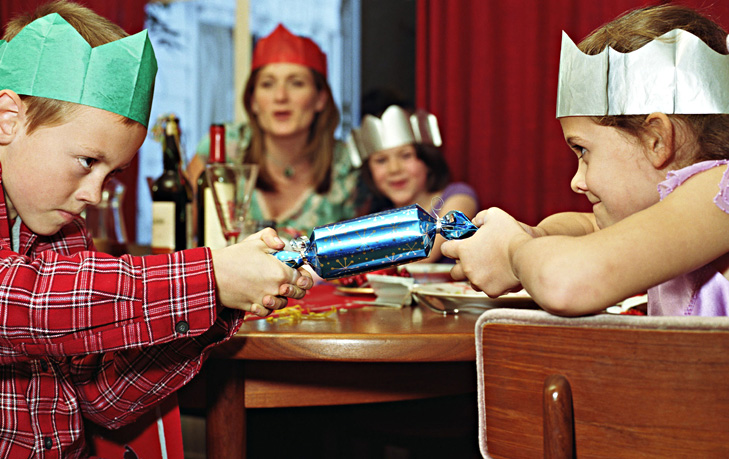 How it Started: Started to commemorate the birth of Jesus Christ.

What’s That?: As a British citizen who has lived in the USA for nine years, I can tell you that there are many similarities with the way the two nations celebrate Christmas. The basics are exactly the same. But there are some quirks.

The biggest thing for me is that, while America builds up to Christmas with the same unbridled enthusiasm as the Brits, Christmas in the States is over in a flash. In Britain, “Christmas” usually refers to that entire period covering Christmas Eve or perhaps a day or two before, right up to the first day back at work after New Year’s Day. Here, people seem to go back to normal the day after Christmas Day (Boxing Day to Brits and Canadians), then celebrate New Year a week later, then back to normal again. That takes some getting used to.

For as long as I can remember, there have Christmas crackers on the dinner table at Christmas. You may have seen these items popping up recently (to my delight) in Target and similar stores. A Christmas cracker is a tube-like item, decorated in festive paper, that two people pull from each end. Inside is a small amount of gunpowder (honestly), so that it bangs when it breaks apart to reveal a joke with which to entertain the table, a silly paper hat, and some sort of gift (a plastic toy for children, or perhaps a pair of nail clippers in the adult versions). The crackers are pulled before eating begins. Give it a try. Also, here in the States, you guys have usually eaten a ton of turkey at Thanksgiving and so will often eat ham for Christmas. Again, there’s no Thanksgiving in England so it’s always turkey. A lack of Christmas turkey can be upsetting to us.

But my own personal favorite British Christmas tradition is the race for the Christmas number one spot in the singles charts. For decades, musicians have been desperate to be number one on Christmas Day, which is why so many British pop and rock stars have released sappy festive songs over the years. Even now, the Christmas number one spot is coveted. People do get sick of the predictability of it all though, especially when it started to become expected that the winner of the British version of The X Factor would take the prize. In 2009, a campaign to make Rage Against the Machine’s classic “Killing in the Name” number one at Christmas that year saw masses of Brits paying to download the tune, and indeed, Rage’s 1992 song sat at number one on Christmas Day 2009. Sometimes, people are awesome. (Brett Callwood)