With Thanksgiving just passed, I really wanted to find a song that encompassed the spirit of the season, and I figured with a repertoire of Disney classics, that should be easy enough. But then I stumbled upon a metal-style version of “Prince Ali” and that plan went out the window. Aladdin simply couldn’t be overlooked, considering the genius of our favorite genie, voiced by none other than the late, great, Robin Williams.

Aladdin is easily one of my favorite Disney movies, if for no other reason than the hilarious, fast-talking, pop culture-referencing, big, blue Genie. Robin Williams absolutely nails this character, providing the comedic relief, best friend, and magical powers to save the day for our hero Aladdin. In the movie, Genie sings “Prince Ali” to introduce Aladdin to the town of Agrabah as royalty in a grand scheme to meet the Princess Jasmine. The jazzy, upbeat introduction is a fun piece of music that’s hard to resist. In a mix of comedy and an utter mouthful of lyrics (courtesy of genius Howard Ashman), Genie praises his strength, attractiveness, and extensive collection of exotic animals. While “A Whole New World” is the first song we think of for Aladdin, “Prince Ali” and Genie’s other song “Friend Like Me” are easily some of the best in the movie as well.

This week’s cover is brought to you by Jonathan Young, a YouTube artist who has released not one, but two entire albums of Disney covers. This particular version of “Prince Ali” is a far cry from the original, and that’s what I love so much about it. It tackles hard rock and metal, with just a dash of screaming. And you know what? It works. The low rhythm and perhaps exotic flair of the original really lends itself to the style, allowing for thundering drums and trilling electric guitar to take over the Disney classic you once knew. I have to applaud Jonathan Young, because he really turns this song upside down. In the movie, Prince Ali is decked out in white and gold, lavish royal clothing and over the top displays of his wealth (courtesy of Genie). But with this song, all I can picture is this fan-made hardcore Aladdin instead: 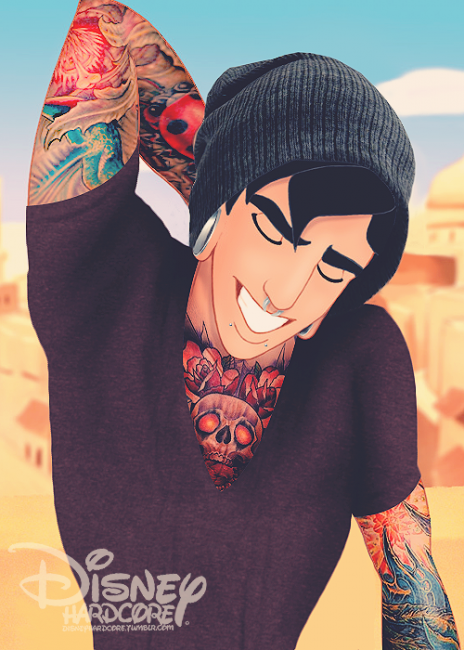 Young’s voice really works for this style, and I find that I’m low-key obsessed with this hardcore version of “Prince Ali”. I mean, it’s no Robin Williams being goofy, but I still love this bold take on the classic. It’s creative, if nothing else!