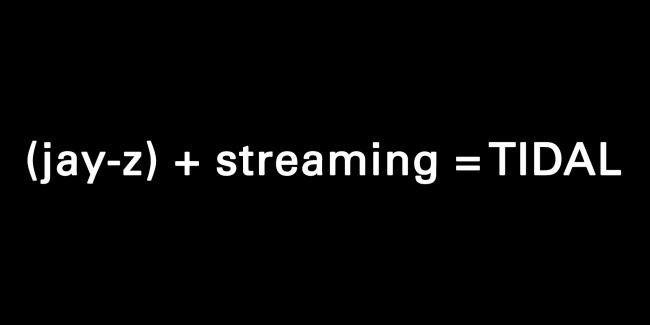 The music industry is crumbling. With torrenting, streaming, YouTube and a barrage of other services the value of the actual music for an artist has dwindled to a miniscule amount, but Tidal wants to change that. Tidal is the new music-streaming app (re-launched today) by Jay-Z and fellow musicians who want to put money back into the artists’ hands.

The current supreme music streaming king, Spotify, gives artists anywhere from $0.006 to $0.0084 per stream to artists; meanwhile Tidal promises to be an “artists for the artist” device to give musicians a better cut of their music plays. Tidal has already offered impressive features such as articles, movies, and videos on their homepage including The White Stripes’ first televised set and Daft Punk’s Electroma movie; both of which are exclusive to Tidal. Going to an artist’s page will give you everything you could ever ask for: their discography, merch store, biography, music videos, social media links, and even an artists’ radio station filled with similar artists much akin to Pandora (without ads). They want this to be a one stop destination for anything you could possibly want from an artist in the way they want it to be seen, not some grainy pirated movie or an album with low quality sound. Too much flak has been given for the pricing and data usage of the “Tidal HiFi” package which for $20 assures premium “Lossless High Fidelity” sound quality; meanwhile the $10 package offers all the articles, videos, and exclusives that give it the edge over the similarly priced top tier of Spotify (Spotify Premium). Artists who pour thousands and sometimes millions of dollars (and years) into their music are being called selfish for wanting to be involved in a project that gives them a vehicle to have the vision they intend for their music to portray.

In an interview with Billboard, Jay-Z expanded on his idea that he wants this to be more than just a streaming service, but more of a place where artists can actually exercise their creativity and have a direct relationship with fans not having to spread so thin. He references the fact that Aloe Blacc can release something that will be played 168 million times, but he’ll only get a $4,000 check. Jay-Z concludes with, “Will artists make more money? Even if it means less profit for our bottom line, absolutely. That’s easy for us. We can do that. Less profit for our bottom line, more money for the artist; fantastic. Let’s do that today.”

It’s been called senseless, delusional, and just plain dumb ­—but it’s admirable to invest in finding a way for artistry to survive this cut throat model that music industry has become. Some may say that this is a way for the rich to get richer–but why should a company (Spotify, Pandora, etc) get the most profit off of a product when they haven’t created it and they do nothing to promote it? Streaming services are a different kind of animal than record labels–and that’s a whole other discussion. Musicians have a flair for the dramatic; especially artists like Kanye West and Jay-Z, so when they claim that they’re going to change the course of the music industry I can see why people are turned off by the thought of it, but when you really get into the specifics of it, Tidal it seems like a no brainer that benefits the two parties we care about the most: the fan and the artist.