In the teething digital music business, where the initial peacocking of having catalogs spanning 30m songs gave way to a gold rush for expert-curated playlists spanning endless activities and genres, a recent hire to Spotify’s product team in early 2015 had an idea for a side-project: what if you could create a weekly personalized playlist, for each user?

The idea became Discover Weekly, an algorithm-driven playlist centered around music discovery that launched in July 2015. Swimming against the expert-curation tide spearheaded by the recently launched Apple Music (and its predecessor Beats Music), Spotify devised a way to harness its wealth of user listening data in order to serve users with personalized new music curation, and in doing so, introduced a significant new paradigm to digital music.

The mechanics behind Discover Weekly and how each user’s individual weekly playlist is created are not rocket science. Firstly, a ‘taste profile’ is created for each user, encompassing their listening history which is then weighted in favour of recent listening history. Next Spotify looks at ‘the world of songs’, painting a picture of which songs are trending and being added to Spotify’s 2bn user playlists worldwide. At the cross-section of a user’s taste profile and the world of songs, Spotify focuses on ‘neighbouring songs’– the songs that other users are playlisting around songs you like. The end result is a playlist that is both responsive to music culture and is designed to take users wherever their taste is going.

Is music discovery incompatible with a largely lean-back listening culture?

Some breakthroughs were accidental, such as a bug during early phase testing that resulted in songs that users had already heard being included in the playlist. Once the team realized users are more responsive when supplied with an element of familiarity, the ‘bug’ was reintroduced, with around one in ten tracks today being intentionally familiar to users. Consideration was even given to the playlist’s cover image, as a hunch that users would be more likely to check out a playlist with their own photo paid off. After importing users’ Facebook profile pictures, the team found users were 17% more likely to try a playlist with their own image rather than a generic image. As Ogle quips, “Sometimes vanity works”.

What’s next for Discover Weekly? Beyond the recently introduced genre specific spinoff Fresh Finds playlists, Ogle divulges that the next steps will involve personalizing personalization, learning how experimental people are, and responding to that.

“Anyone who cares about music even a little bit knows that thrill you get when you first hear a new song or a new band that you really love. Everyone wants that but people don’t seek it out” – Matt Ogle, Sr. Product Owner, Spotify

During its early testing phases, Discover Weekly performed so strongly that it was fast-tracked and launched before clearing many of the usual procedures Spotify follows when introducing new features. After a soft launch in June 2015, it was fully rolled out in July 2015 to the sound of online curiosity, which after ten weeks developed into one billion plays and $7m paid in royalties. Perhaps the precise moment when the Spotify team realised the true magnitude of what they had created came one Monday morning in September 2015, when technical difficulties caused Discover Weekly to be late, and passionate users responded by taking to social media to express their sadness and outrage. Buzzfeed subsequently posted an article titled “Spotify’s Discover Weekly Updated Late and People Were Furious”. The article stayed on the front page of Buzzfeed for two days. In only a few months, Spotify had inadvertently created a Monday ritual for many.

In recent decades, artists often weren’t aware of how successful they were in overseas territories until royalty checks arrived 6-18 months later, by which time it would be too late to fully capitalize on that demand. Today, such information can and should be instant.

Looking at the wider culture and industry, music discovery is somewhat of a delicate topic. Most startups centered around music discovery are avoided by serious investors and almost all either close down or only find their usefulness via an acquisition (or, uh, both). Most people do want to discover new music, but don’t want to work for it. Is music discovery incompatible with a largely lean-back listening culture? Since record stores relinquished the mass music discovery onus in the late 90’s and the internet largely fragmenting and oversaturating the options for discovery, it is the loudest and most culturally homogenized options that overwhelmingly win, rather than the best, and certainly not those personalized to a person’s tastes–until now.

Innovation and success are difficult in music. Any professional will tell you that great ideas face an uphill battle to execute and require extraordinary talent and resources, and many simply don’t take off. When expectations are met, successes are often culturally and financially modest, grounded in a sense of post-Napster realism–there are just three music startups (Spotify, Shazam, and Beats Electronics) valued at more than $1bn. Considering this context, how many large companies would be bold enough to fast-track a product like Spotify did with Discovery Weekly, and how many would succeed? 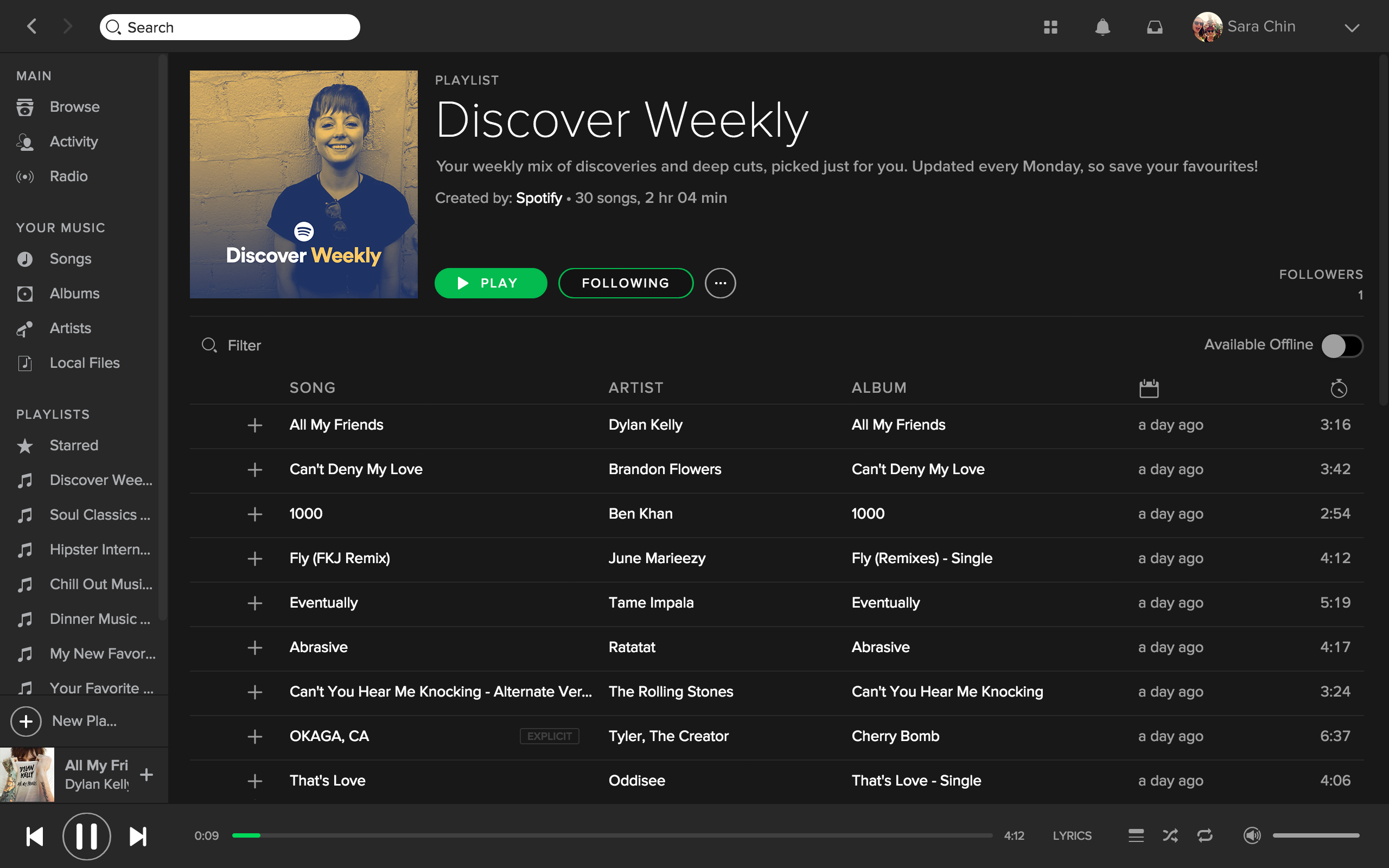 Impacting the Landscape with Data & Personalization

While streaming payouts still remain meagre for all but those with sizable catalogues to bank on, Spotify is and has always been an ally to the music industry, a trailblazer that emerged as an alternative to piracy–something outspoken voices in the industry who chastise streaming services are quick to forget.

Even the fiercest critics of Spotify must concede that nothing, past or present, can compare to the global data goldmine it now shares with artists and their teams via its Fan Insights dashboard. The listening data, accumulated by Spotify’s 100m strong worldwide users–the largest and most engaged music audience in the world–provides insights into where and how fans are discovering and interacting with music. This enables artists and their teams to truly understand their fanbases and be responsive to demand via touring and marketing efforts. In recent decades, artists often weren’t aware of how successful they were in overseas territories until royalty checks arrived 6-18 months later, by which time it would be too late to fully capitalize on that demand. Today, such information can and should be instant.

…by introducing Discover Weekly, Spotify has torn up the rulebook and democratised music discovery.

The success of Discovery Weekly will no doubt reinvigorate Spotify’s competitors to find new ways to curate a personalized experience for listeners. Just last week, Rhapsody announced Listener Network, a social-first feature described on company’s homepage as ‘people powered music’ that allows users to connect with other users based on their musical compatibility. But more importantly, in an industry where breakthrough artists are often dictated by politics more than talent and where the industry’s age-old cookie jar of payola seems to persist in influencing playlists, allowing the labels with the most power to dominate branded playlists and continue to rule the charts, by introducing Discover Weekly, Spotify has torn up the rulebook and democratised music discovery.

A less top-down, more bottom-up artist development paradigm for the music industry cannot be a bad thing for new artists or listeners, while traditionally powerful labels and marketers will need to adapt and work even harder to engage fans. Perhaps one of the most interesting things to observe will be the effect Discover Weekly and similar personalisation movements will have on music marketing, as playlisting gradually becomes currency. Or as Spotify’s Director of Economics Will Page smirks and nonchalantly responds to a question asking how to get a song added to Discovery Weekly; “put good music out and have your fans add it to playlists”.