Glamour Kills – Part 1 may have ended in a war of ‘art versus business’ between them and a former partner, but it sure as hell didn’t end there. When a group of firemen kicked in the door of the GK office they were actually kicking off a new age of Glamour Kills. And the flying pig came out blazing.

Read how it all began in Part 1 of The Rise, the Raze, & the New Age of Glamour Kills

September 15, 2015 marked the beginning of a new era of Glamour Kills. Ten months later Marky and I reconvene to continue our chat. Every legend goes through a dark moment, but in order to become legendary they must survive to rise up. Marky credits his mom, his sister, and Gabe Saporta as major influences that keep him going on the personal side of his professional career. Gabe, the frontman of Cobra Starship, comes through with the honesty Marky craves. And about a year ago Marky found new partners, silent ones, “…a company who believes in GK and myself. They understood the situation I’ve gone through, they’ve gone through it themselves, they’ve seen it happen. They understand the value of the brand. They understand the support and systems that the brand needs so I can focus on the creative direction, and the music, and the designs—the lifeblood, what makes GK GK.”

A couple of days before our talk, Glamour Kills and Alex Gaskarth, of All Time Low, launched a new extension of their AWG collaboration. This new line is called Fools Like We and the logo, which features a bird with Xs for eyes, immediately recalls the Atticus line by blink-182. Such a smart move, because that visual lends a sense of history to Fools Like We while making it clear that this brand is the next generation. This is who we (the pop-punk scene) are now. And the “we” in the brand’s name is a statement that: Through whatever, we’re in this together.

“I’m reinvigorated, I’d say, and I owe a lot of that to Alex. And the whole band, I should say, but mainly Al.”

Marky echoes that sentiment when he tells me about a crucial element in reviving GK—something he says he hasn’t had the opportunity to tell Alex yet, “Him working with me on this really helped me get reinvigorated in working with Glamour Kills and working with bands. He reminded me what makes this fun. You know? And it just seemed really fitting that he would be the flagship, I guess, the flag carrier for Glamour Kills ushering in the new era. I’m really proud of what we just did together with the new line launch. I couldn’t have done it without him and, in a way, he helped boost my confidence to get back to things and understanding the community aspect of Glamour Kills and, like, the importance of building something more than t-shirts. Because for awhile it was like ‘oh, we’re just making t-shirts’ and you kind of forget the soul of the brand and why you started this thing in the first place.” Marky takes a breath and it’s filled with feeling. “I’m reinvigorated, I’d say, and I owe a lot of that to Alex. And the whole band, I should say, but mainly Al.” 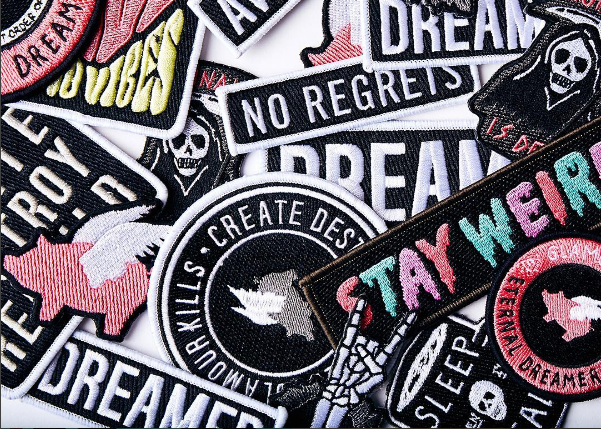 Dear old Al’s influence leads us directly into what’s next for GK. Marky can’t say much but he’s nice enough to give us some hints, and it all goes back to the music. “We’re going to get more involved with the music, not just t-shirts anymore. We’re going to be offering more music options with different partners as far as special records and different music releases. We’re going to be collaborating with non-music artists as well, one of which, ooh man, I can’t give away too much but they’re more in the action sports and even wrestling worlds. Stuff that very much is in line with our music community and people that are involved already but they’re not necessarily musicians themselves.”

The sense of mystery and anticipation that Marky evokes with the above description is more than enough to create a buzz in our office, but he’s not done teasing us yet. “Another hint would be a couple of other people we used to collaborate with [who] we haven’t done stuff with in awhile are going to reemerge. Those are a few hints I could give.”

The Return of the Artist Inside

Those are good hints! But I’m also interested in what’s going on with the artist inside the business man. “I’ve been working on a lot of my personal art. My buddies own a screen printing shop in upstate New York, like an hour outside of the city, and I’ve been spending a lot of time with them learning about poster screen printing. I’ve always wanted to get into that and I’m just starting to do it. And I’ve had all these designs for years that I’m like, ‘man, this would really look good on a poster’. And whether I sell them or not, I think I really just want to make them for myself.”

“It’s so nice to work on something and not feel pressured. You know? There’s no expectations of it. It’s just for you. It makes you feel good. You know? And that’s all that really matters.”

If you’re a fellow visual artist, you know how important it is to make art that serves no other purpose than to feed the soul of the artist inside you, and it’s amazing to hear that Marky has found the joy in simply creating again. “I hadn’t been paying attention to that for so long. It’s so nice to work on something and not feel pressured. You know? There’s no expectations of it. It’s just for you. It makes you feel good. You know? And that’s all that really matters.”

The Good Guys Rock The World

Let’s take a moment to reflect on what a cool ass dude Mark Capicotto is. He and I begin to talk about the latest shooting, this time resulting in the death of Alton Sterling—apparently for the offence of selling CDs in front of a convenience store. Alton’s story is heavy on Marky’s mind. That conversation leads us to the pro-LGBT “CREATE LOVE DESTROY HATE” t-shirt he redesigned and dedicated to support the families of the horrific attack on the LGBTQ community in Orlando. GK donated 100% of their profits to that fund. The inspiration came to Marky when he asked himself what he could do, other than tweeting “I’m sorry.” He wanted to help in a tangible way and says, “That was our small part in that.” 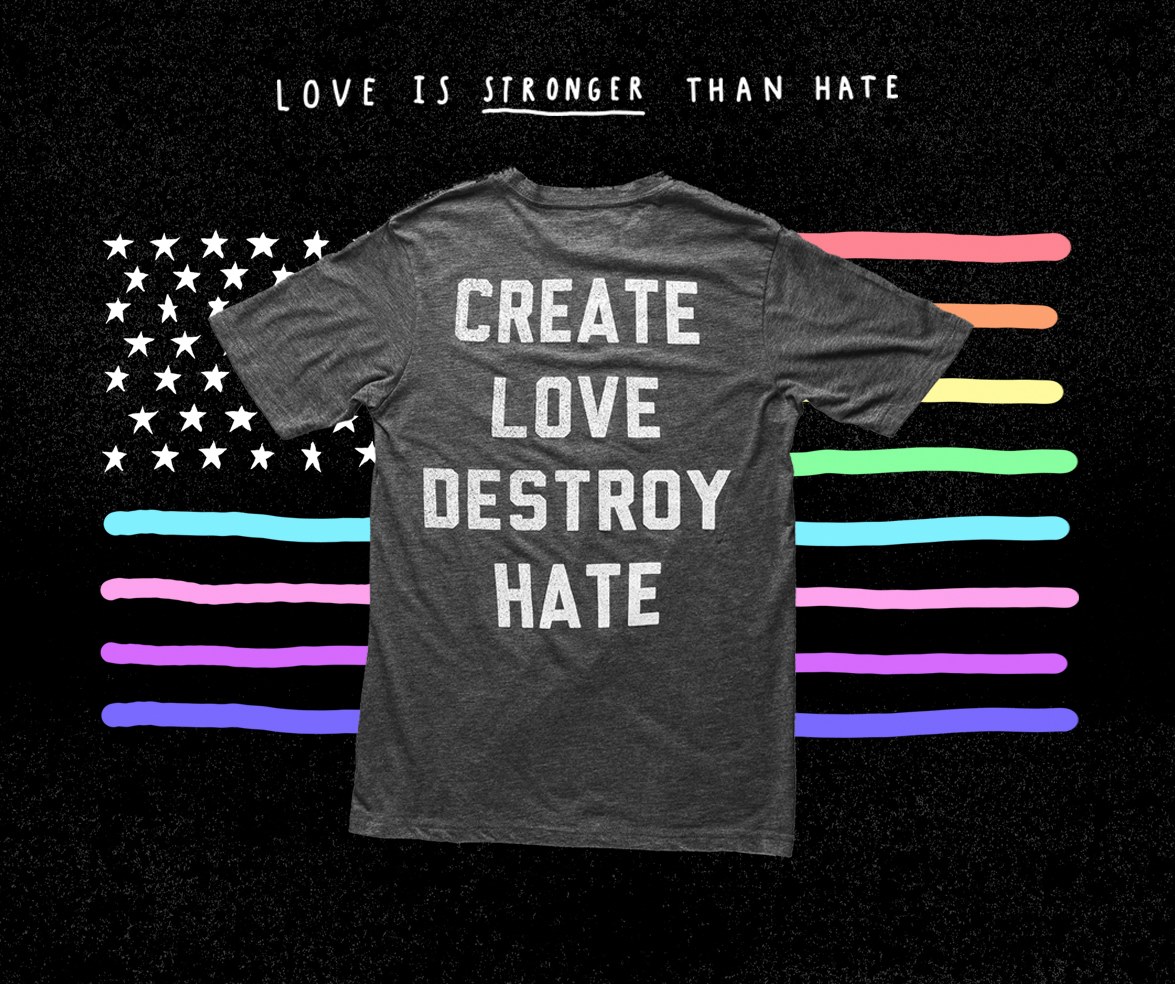 He goes on to talk about possible changes to the way we view and carry guns. “[Guns] have never made me feel comfortable or feel more safe or…I just don’t understand. I don’t understand. It’s not even like the laws people are proposing are that out of control. It’s just common sense gun laws that we’re asking for in this country, and making it a little more difficult for people who might do something bad to actually obtain them.”

It’s clear that combining this kind of passion with a connection to what’s important to his customers is what fuels the passion those customers have for Glamour Kills in return—and it’s well deserved.

Every legend goes through a dark moment. In movies, it’s when our hero takes a fall they’re not sure they’ll get back up from. Just like any legend, Glamour Kills recently fought their way back from their rise-or-die moment. And they’re still standing. If you’ve ever watched Dragon Ball Z or listened to a Kelly Clarkson anthem, you know what doesn’t kill you makes you stronger. GK is still here. Still strong. 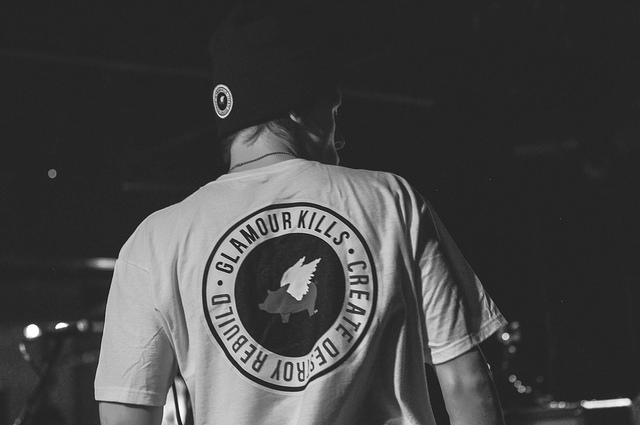 Marky said it best when he created the CREATE DESTROY REBUILD line in 2013. He launched the line as the antithesis to the failing relationship with KRP (a key retail partner); Create Destroy Rebuild never went into stores because it’s a true representation of the ideology Glamour Kills is built on. “Now that I look back on it, it was kind of like this underlying feeling that I knew this was happening. That I knew eventually things were going to have to get torn down and built back up.”

If the Glamour Kills story is the movie I’ve been comparing it too throughout our conversations, then Marky has chosen “Came Out Swinging” by The Wonders Years to under-score the opening credits. Likewise, if he picked a theme for this moment, when GK rises up again, with their “Never Say Die” banner waving, then the song that’s playing, right now, while our hands are held high in the air is “Looking Up” by Paramore.

Throughout my two chats with Marky, I learned something important about the brand. Glamour Kills is a living zeitgeist—a spirit of our times—and Mark Capicotto is its heartbeat. As a scene hero, GK has been through the same dark moments as pop-punk itself. Both have appeared to falter only to experience resurgences with fresh ideas and new tunes. So get your hands out of the air and put them on your keyboards. Because GK is back, and just like the artists and the music we love, “It’s worth fighting for.”