Greetings from SXSW! Yes, we were present at the annual gathering of creatives at what is often referred to as THE conference to “celebrate the convergence of the interactive, film, and music industries.” We are loving it. You always hear stories about the conservative nature of the state and their aggressive independent streak. Think about it, the entire WORLD knows phrases like: “Don’t mess with Texas” or “God Bless Texas”, and as an LGBT woman of color, I am embarrassed to admit, I was worried about my welcome.

I couldn’t have been more wrong. Everyone was warm and welcoming and a lot of fun. And Austin has the best margaritas I’ve ever tasted*. But as a note, do NOT try to outdrink Texans. ☺

When it comes to music, SXSW had some great performances like Annabel Allum from the UK, and the unique sounds of Orkestar Kriminal and you can’t forget a band with the name…And You Will Know Us by the Trail of Dead. ☺ (My personal favorite)

It’s kind of wild; the sounds, the songs, the variety of people you meet…

Which is why it perhaps wasn’t so surprising to see these signs up in the bathrooms at SXSW. 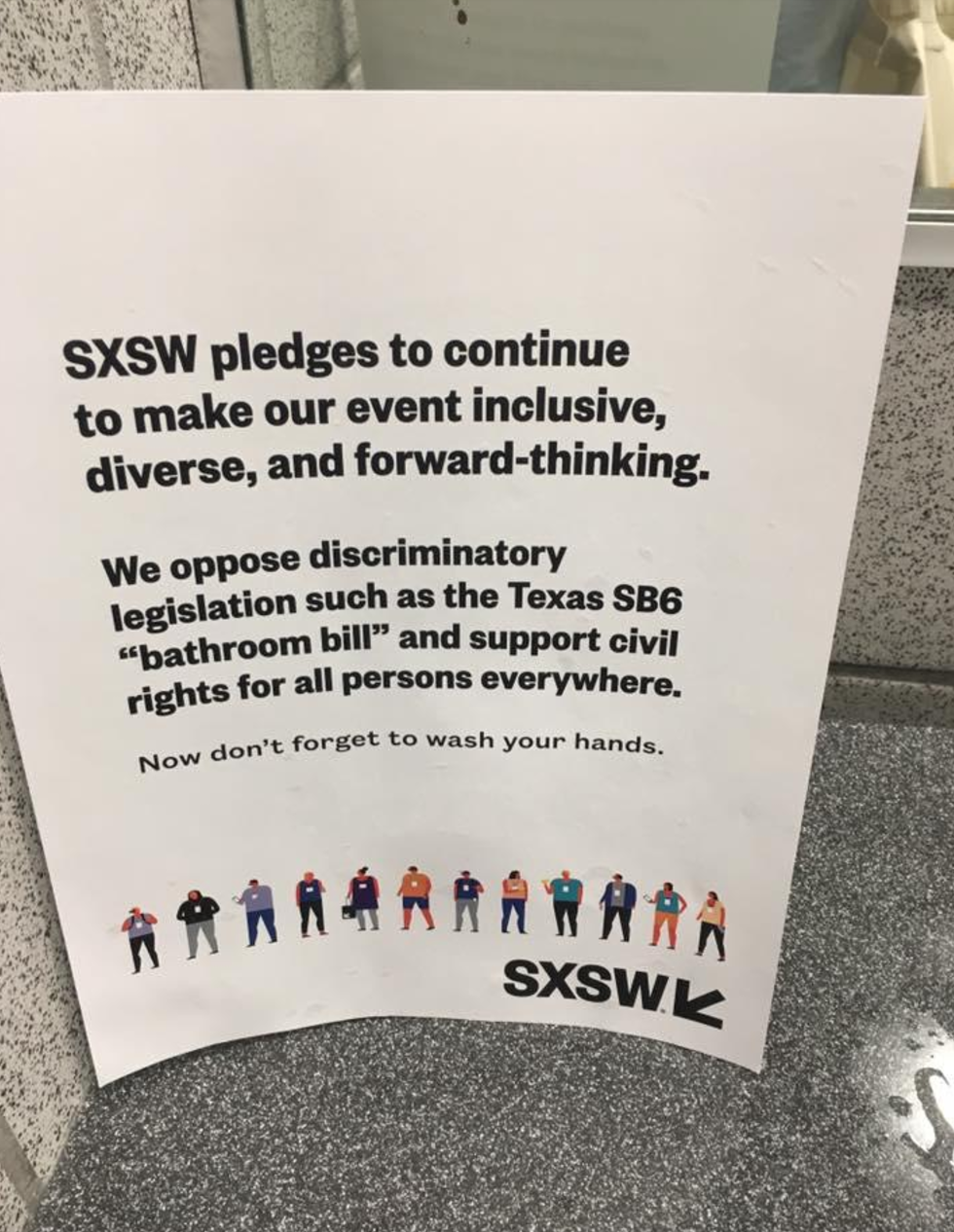 In January, Texas Lt. Gov. Dan Patrick announced legislation (Senate Bill 6) that would require transgender individuals to use public restrooms and changing facilities based on the sex reflected on their birth certificate. The Senate passed the bill on Wednesday March 15 (right in the middle of the music portion of the SXSW festival). Supporters of the legislation said that it protected privacy and prevented sexual predators from being able to enter women’s private spaces.

However, looking at research and larger scale studies, there is no supporting evidence for such legislation. There is no history of privacy violations and sexual predators connected to allowing trans individuals to use the bathroom that most matches their gender identity. Within school systems there have not been incidents of “harassment or inappropriate behavior” related to transgender students and bathrooms. In fact, the legislation would seem to increase discrimination and harassment against transgender individuals, including vulnerable transgender youth.

The Texas Association of Business looked at what happened in North Carolina and estimated potential losses associated with South by Southwest alone, over four years, would amount to $38 million. In their letter, they go even further.

“Texas receives $68.7 billion in travel spending, which generates $6.2 billion in state and local taxes. Over 1 million jobs are supported by travel, 648,000 direct and 488,000 indirect. This vibrant industry, the second largest in our state, would suffer declines similar to those experienced by other states if Texas loses its reputation as a welcoming destination for all visitors.”

– Open Letter from Corporate Leaders with Operations in Texas

There are statements from heavy hitters like Apple, IBM, Marriott, Microsoft, Dow Chemical, HP, United Airlines, PayPal, Intel and others, many of whom have strong presences in the state and evidenced their views again at SXSW. Another letter from the creative community included celebrities and performers; and perhaps even more important to sports-enthusiastic Texas, are statements from the NBA, the NFL, and the NCAA against the “bathroom bill” and warnings of grave repercussions.

But for many of us at the conference this year, and many coming to SXSW in the following years, I think we agree with the signs. We don’t care who uses what bathroom, just don’t forget to wash your hands.

* If you have recommendations of other places/states with better margaritas, I’m happy to take up the challenge and test my theory.