Most Wanted for: Making songs so annoyingly catchy they’ll never get out of your head. 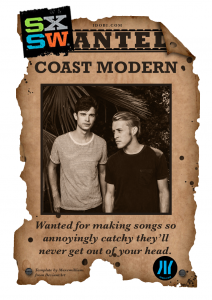 It’s not quite spring yet, but Coast Modern didn’t get the memo. Instead, they’ve blown right past the season altogether with their synth-infused indie pop and gone straight to the middle of summer, like a kid beelining for the pool on the first day of vacation. Songwriters Luke Atlas and Coleman Trapp honed their skills writing pop songs for mainstream chart toppers before teaming up to fully realize their potential together with weirdly irresistible hooks that are so incredibly radio-ready yet “out there” enough to leave you wondering how they managed to make it work. How, you ask? By going with the flow and not overthinking things–which is exactly what you should do when listening to their breezy, carefree tunes. By the end of their set you’ll find yourself swaying back and forth, beer in hand, shrugging all your worries away like you’re actually on a beach somewhere doing the definition of #chillin. They’ve only dropped a couple of songs so far but generated a huge amount of buzz on the indie blogosphere already, so check out their sets at SXSW and catch them on tour with BÃ˜RNS (another one to go see while you’re at South By) this May before they start selling out huge venues of their own.