Ladies and gentlemen, the idobi Supreme Court is convened today to discuss the case of Beach Weather v. Beyonce, two stellar music acts who share many of the same qualities, including but not limited to: flawlessness, and surprises.

The case will be made that Beach Weather is the indie version of Beyonce. While there are no clear defendants or plaintiffs in this case—because everybody wins—it’s obvious that the evidence must be presented for the sake of music fans everywhere. Now that our star witness, Nick Santino, has taken the stands, we don our judicial gowns with great diligence, and present our case.

Exhibit A: A Southern Side

Queen Bey hails from the South, where everything is bigger, hotter, and saucy with swag. Meanwhile, Beach Weather frontman Nick Santino comes from…well, the opposite of the South. “There’s a lot of country fans in [Massachusetts], but I think it’s a lot of bro country.” This doesn’t mean he’s out of H-Town jurisdiction, though, because he manages to use country sounds like an honorary Southerner. “I’m from MA, but musically I feel like I’m from everywhere. I’ve always been a nomad — or like a mutt [laughs].” 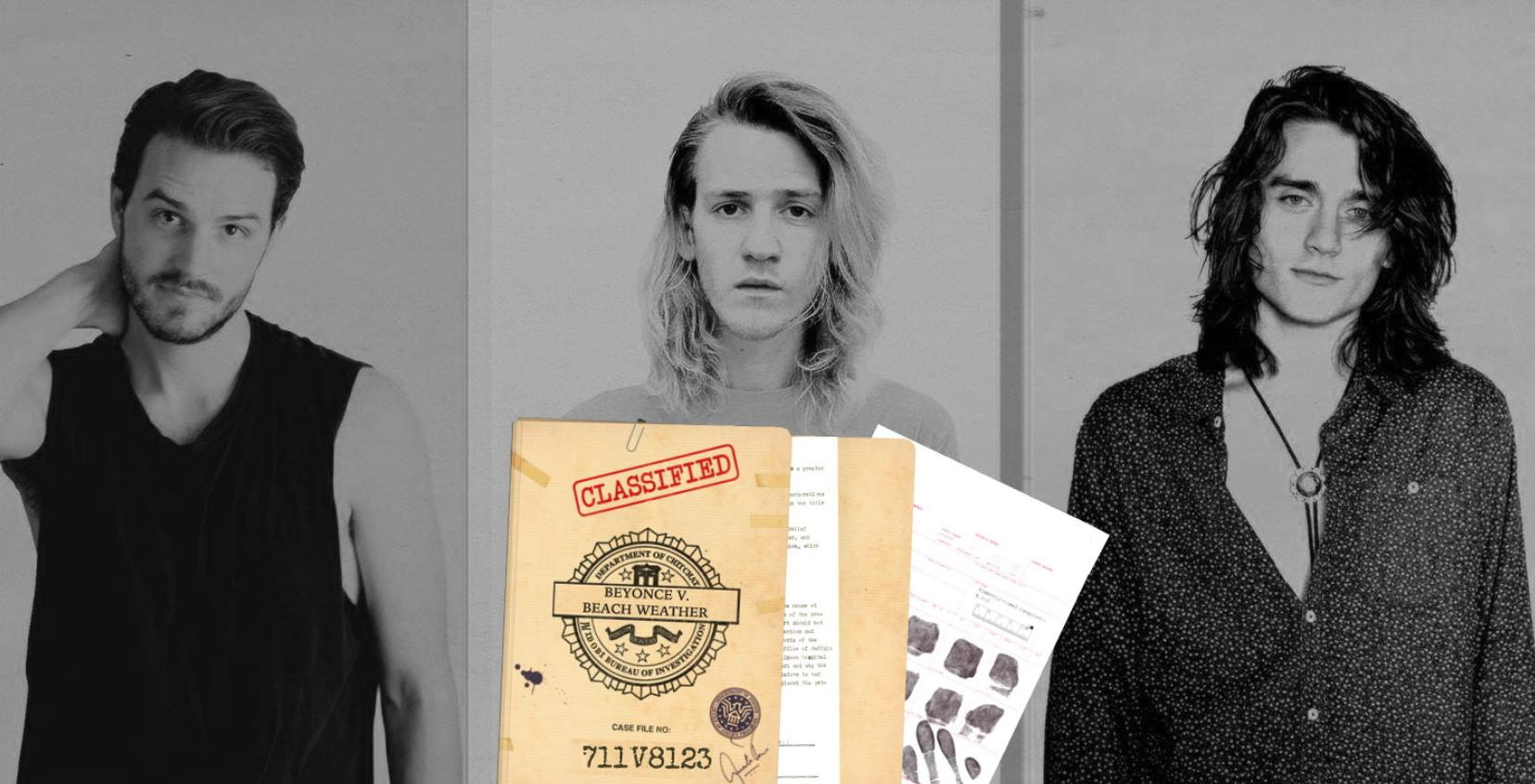 For the next piece of evidence, the court calls your own memory to the stand. Think back to when Beach Weather announced they were a band, released an EP, and headed out on tour with The Maine? Like Nick said, “It went from [fans] having zero idea that I was even talking about starting a new band to all of a sudden waking up one morning and being like there’s a new band, and an EP, and they’re on tour and I can see them next week.”

The band has never been able to shake that mysterious edge—people are still surprised to find out that Nick Santino is part of it. “People have no idea that I’m in it, which I think is kind of cool because that’s what I wanted—the fresh start.”

“It was like the Beyonce approach, I guess,” Santino laughs. To provide evidence to Santino’s claim, we’ve subpoenaed the Beyhive. Unfortunately, no members could make it to today’s hearing (they’re still losing their sh*t over the album she dropped with no warning in 2013).

Who can do that besides Beyonce…And Beach Weather.

Exhibit C: Creating I Am Sasha Fierce & The Northern Wind

Speaking of Santino, he’s a man of many projects, “I’ve never liked sticking to one sound…. even in Rocket, we were playing some of the fun pop-punky, emo-y stuff, and then me and Justin, who wrote the songs in the band, were big country fans. We were like, if we’re fans of the music, why not add some of that element to it?”

Direct examination of the frontman reveals he has all sorts of musical aliases: from A Rocket To The Moon, to Nick Santino & The Northern Wind, to Beach Weather. “When I went solo, I pulled more of that [singer-songwriter] type of thing… I think Beach Weather was a product of me listening to some new stuff and wanting to take that 80s kind of fun, synth-poppy, dreamy stuff to that rock and roll vibe that I’ve had.”

It’s affirmed that each project has its own personality, “I’m not forcing a new sound, it’s just what I’m writing at the moment, and that’s how I’ve always done it.”

Beyonce, too, has explored all of her musical sides by way of an alter ego—the Clark Kent to her Superman, if you will. I Am Sasha Fierce presented the other side of B…a persona that was subsequently “killed” two years later. While that kept us from a proper cross-examination, it didn’t keep the album from going triple platinum.

Ladies and gentlemen of the jury, as you’ve seen in the media, on the streets, and at your local apparel shop, the Beyonce disorder is real. If you’re a fan of Bey, chances are “flawless” is the most used word in your vocabulary, and you know the “Single Ladies” dance better than Joe Jonas. The Queen of England might be called Elizabeth, but the Queen of the world is Beyonce.

Beach Weather fans have proven to be just as fierce in their support. “I noticed that a lot of them are very supportive, which is awesome, and happy I’m still doing something,” Santino says. The party has followed him from project to project, and there’s no sign of slowing down now.

Queen Bey is known for her voyages into pop and R&B. If members of the jury have listened to Lemonade, they’ll know she has even more to offer. From reggae vibes to New Orleans chills, Queen Bey hasn’t found a genre she’s afraid to dive into and conquer.

Beach Weather also keeps things exciting with their indie sounds. Underlying rock ‘n’ roll, folk, and pop vibes keep their debut EP fresh, even after you’ve listened to it a million and one times. “I think making the same record five times in a row is really boring. To me, for fans, if you were to do that and every record sounds the exact same—sounds like it could be one 50-song record—I think there’s nothing really to be like, ‘That’s my favorite record! No, this one’s my favorite record!” Santino stated in his deposition.

Their new single from the upcoming #ChitChat EP only furthers their exploration. “Someone’s Disaster” is as inexplicable as the pineapple on it’s cover (Where’s the pine? Where’s the apple?), but it is sweet. “You mix all these ingredients together and it becomes a product, and I think that’s what makes a band a band, instead of forcing something that isn’t there in the first place.”

For our closing argument, we’d like to bring the jury’s attention to one element no one can contest—Both Beach Weather and Beyonce are **flawless**. Whether on indie jams that make you wanna Swoon, or R&B grooves that’ll have you smashing windows ‘cause you ain’t Sorry, both artists have honed their skills and made careers out of being absolutely fabulous. “I’m having a lot of fun playing on stage again with a band. It’s cool to start over that way—new guys, new songs, and all of that… I’m hoping good things happen and I want to see where it goes from here. I’m really happy with what we’re writing.”

Ladies and gentlemen of the jury, we rest our case. The idobi courts will take a short recess while we await your verdict (and grab some tacos). Are Beach Weather guilty of being the ultimate indie Beyonce? All those in favor, tweet #aye.

* Quotes Taken From An Interview by Alyson Stokes