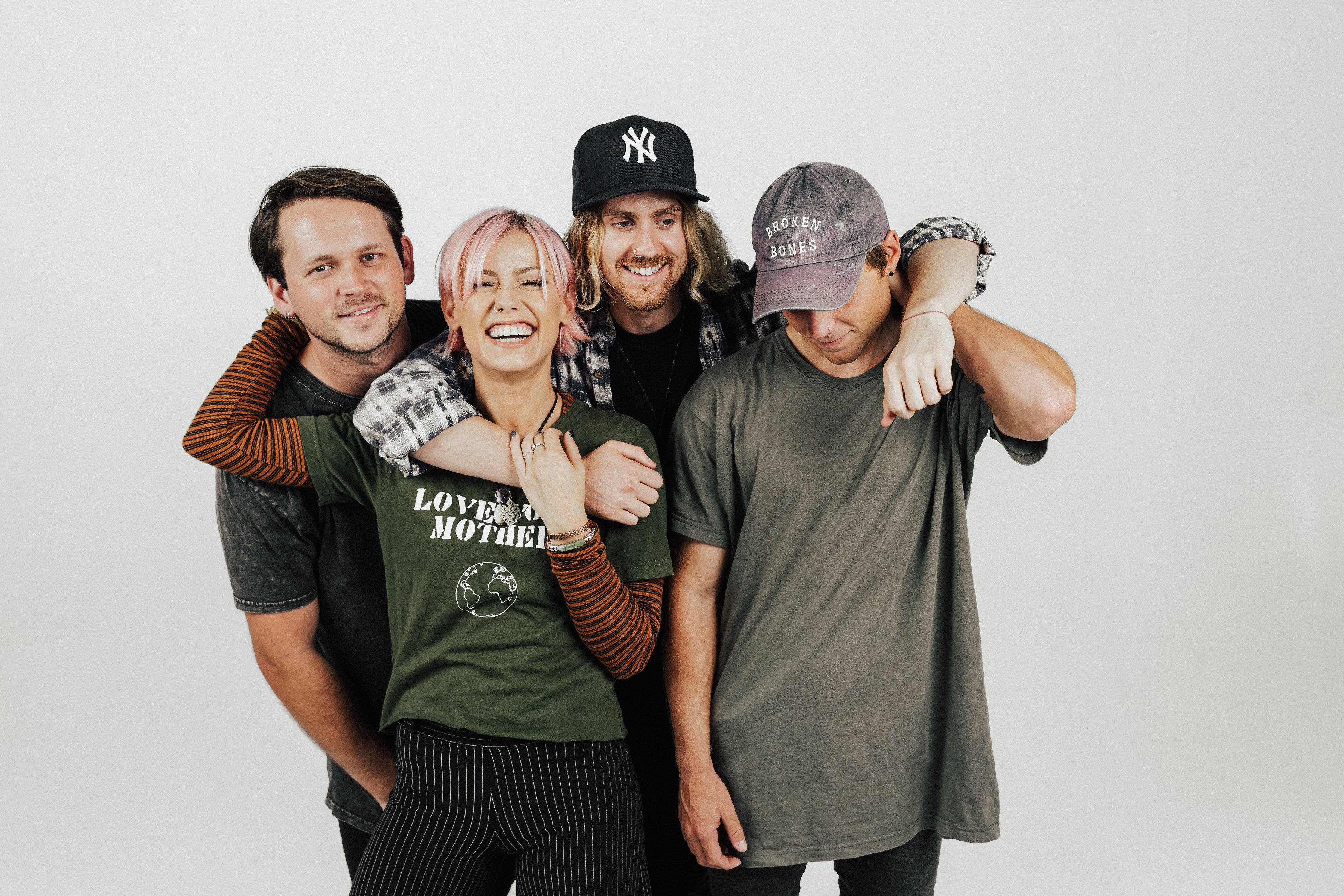 It’s time to take a trip to the Underworld. Not the place filled with fire and brimstone that you’ve heard about from ancient texts or the Lucifer series, but instead a spiritual realm where your past traumas and mistakes still exist, and the only way to get rid of them is to dive into your psyche and do it yourself. This is the lesson Tonight Alive’s latest album conveys. The band has been on a journey of self discovery throughout their discography, and in their new release, they’ve found what they’re looking for.

“This record is a product of me standing in the fire, and going to the underworld.”

A lot of this is due to vocalist Jenna McDougall, who I call a couple of days before the album is set to release. We dove into her own personal Underworld in order to understand the collection on a deeper level, because to write this album she had to stand in the fire. Now—more whole than ever—she has advice for the rest of us on how to withstand the flames. “The underworld is kind of like a spiritual concept that is referring to a realm within the psyche where you might have rejected yourself or abandoned yourself or neglected things that needed attention,” she explains. In a realm where past pain still exists, the main goal is forgiveness—of others, of yourself. “You have to feel your feelings essentially, instead of trying to sweep them under a rug every time they seem overwhelming. This record is a product of me standing in the fire, and going to the underworld.”

Jenna says everyone is given the chance to find this place, and when they’re ready to start they’ll go on a life-changing journey. For her, it happened to show itself during the creation process. “Writing the record was when that opportunity presented itself to me, at a time that I could actually dig into it.”

If you’ve heard it, you know Underworld is full of alt-rock songs that are perfectly suitable for dance parties, and also for personal mantras. “I guess that was just the natural expression of these emotions and how they sonically represent themselves,” the vocalist tells me, excited to let the world hear the songs. “I’m not sure that Tonight Alive’s ever had grooves in our music before.” With singles like “Temple” and “Disappear”, Jenna’s watched the world dance to her music more than ever before, which is an accomplishment she’s happy to see more of.

“It’s just about making the request and asserting yourself, and knowing what you actually need.”

Misery might love company, but so does healing. Asking for help, and letting yourself receive what you need, is Jenna’s secret weapon. “I think sometimes it’s just about making that request to the people you love. I know, in my life, I have a lot of people that love me and that I love, but there are these invisible barriers because we’re conditioned to not be vulnerable, and that’s got in the way of a lot of my needs in the past.” She found that tearing down barriers gave her relationships a newfound strength, and that was only because she let them see her vulnerability. “Just having someone that can receive that for you, that’s a huge part of healing.” 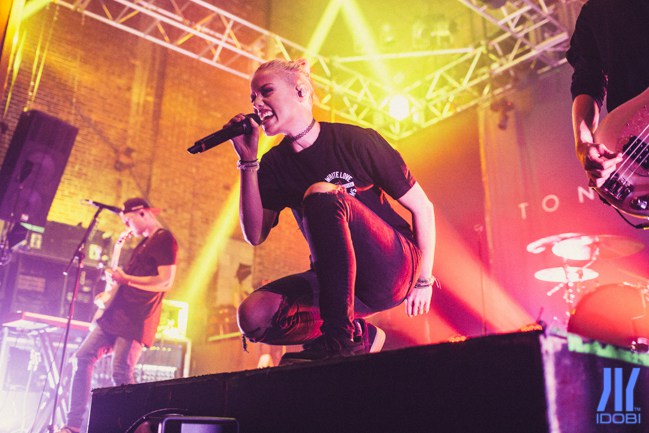 We’ve all been there—knowing you want help, knowing who to ask, but now knowing how to do the actual asking. Jenna shares that if we leave our fears long enough, we’d see help is everywhere. The real question is just figuring out what you actually need. “It’s just about making the request and asserting yourself, and knowing what you actually need.”

Speaking of bringing in help, the album features spectacular collabs from PVRIS’ Lynn Gunn, and Slipknot’s Corey Taylor, whose story with the band starts with a little blue bird. “He reached out to me on Twitter a few years ago, which was pretty bizarre. We had a little conversation over messages in 2015. I didn’t speak to him again until we finished Underworld.” Jenna reached out with visions of his voice on the album’s title track. He was hooked, and now they’re giving us a song that’s a beautiful meeting of their minds. “Everything that you hear is pure Corey Taylor.” The band wrote the song, but Corey made it his own. “That was a really special coming together.”

“I’m just trying to keep my heart open, for myself and for others.”

Listening to Jenna tell her story of the Underworld, a few main themes stick out in my notes: Healing, timing, companionship, and authenticity. ”Coming closer to my authentic self is important to me in everything that I do. I wanna be expressing the truth.” Jenna is on an honesty project, meaning she can’t modify her needs and wants for fear or for judgement. This is the theme found on a lot of Underworld’s songs, as well as Jenna’s intentions for the new year, and it seems to be the key to self discovery.

If this is Jenna’s honesty project, her next one will be following her intuition. “Your body’s always talking to you.” With this idea, she intends to learn to listen more fully. It can be easy to shrug off a bad vibe, and it’s just as easy to ignore a good one, but by tuning into her gut feeling, Jenna thinks she’ll become an even better version of herself. “I’d really like to do like an intuition project where I make every single decision and everything I do in a day based on my gut feeling. It’d be such a good exercise to actually put that in practice for an extended period of time, and not just when things are difficult.”

There’s the difficult times, the injustices that plague women in the entertainment industry—and now, we’re finally finding their voice to stand up and make a difference. When I ask Jenna how she deals with these issues in music, she has an empowering approach. “I just don’t see myself as separate. I don’t really like separatism.” She says our stream of consciousness has been damaged by society’s expectations of masculine and feminine energy, and we’re all trying to heal from it just the same. “I’m just trying to keep my heart open, for myself and for others.” 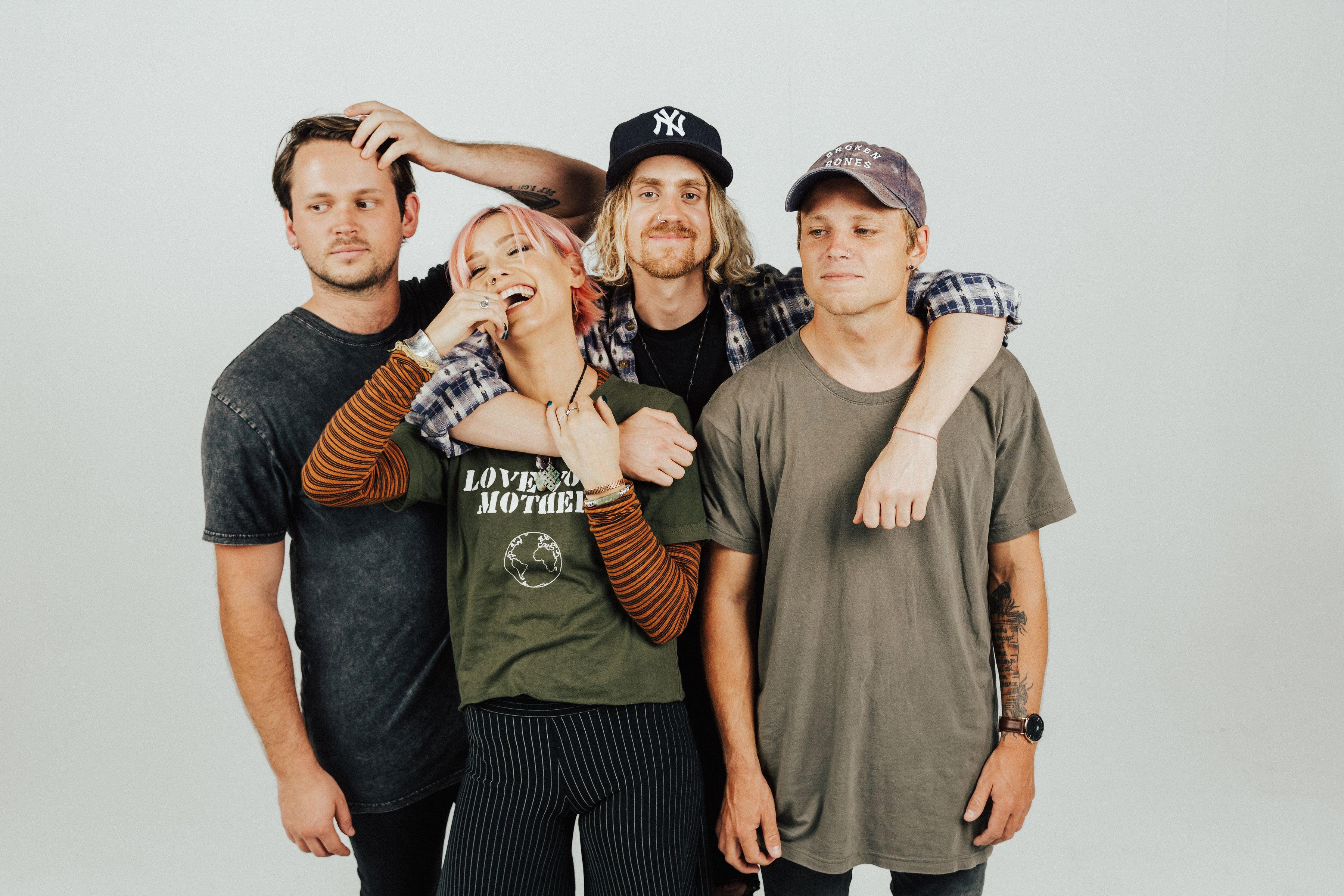 “It’s not just the voice and the ears, it becomes the heart and the soul and the body.”

Today, Jenna has blazed a trail that we all can aspire to. She’s taken the industry by storm while on a journey to herself, and she’s never let anyone take her power. Next up on her agenda is performance, and the full body experience of Underworld. “Once you’re playing it live, you’re kind of in the moment with it and you’re experiencing everything that triggered the song again, and, like I said, it’s a full body experience for me. It’s not just the voice and the ears, it becomes the heart and the soul and the body.”

“I feel like the song comes through me, and I’m just the vessel for what the song says, in a way.” A vessel for songs of discovery, of growth, of strength, and of making it through Hell and Back. We could all learn from Tonight Alive’s lyrics, and Jenna’s stories, but the most important sentiment might be her refusal to ever be made less.

“I don’t ever treat myself like a victim. I keep my chin up, and my shoulder back, and I just stand up for what I believe in. And I don’t really let anybody influence that.”

You can grab your copy of Tonight Alive’s Underworld on iTunes, or through MerchNow.