There’s an apology waiting on the other end of the line, in what can only be described as the most English greeting possible; Milestones vocalist Matt Clarke has just rushed home from work to take my call, cutting it close to being late—and seems surprised to be talking to a fellow Brit. “Every other person I’ve spoken to recently has been American,” he jokes—but there’s an element of truth behind the humour; having recently signed to US label Fearless Records and garnering a ton of buzz across the pond. Following the release of their debut EP Equal Measures, the attention from both sides is only going to grow—and with good reason; the record is an epic offering of pop punk from the UK to challenge the US for its alt-scene supremacy. From the opening track “Call Me Disaster” which is destined for rock radio airtime; to the Fearless-attention grabbing “Nothing Left”; through to the creation of a mysterious character in “Shot in the Dark” whom you’re going to be seeing a lot more of (more on that later), Equal Measures is a five track tale of the Manchester band so far, and lays a substantial foundation for what’s looking to be a promising career. And talking to Clarke, it’s apparent that everything Milestones creates is completely true to them: each song represents a different facet of the band, and tells their story in the best way possible.

Growing up & Learning from Relationships

Can we just take a moment to point out that the guys in Milestones are barely out of high school? Most kids their age—and this sentence makes me feel ancient even though I’ve only got a few years on them—are worrying about exams and getting jobs or going to college. Instead, they spent their latter teenage years recording at the legendary Steel City studios. That’s a pretty big deal. Working with producer Phil Gornell (All Time Low, Bring Me The Horizon, Pierce The Veil) is an even bigger deal, and may seem like a daunting undertaking, but he took them under his wing, and their drive to learn has never ceased since. “When we first started working with him we were kids, 16, 17 years old, and he was a lot more impatient with us,” Matt laughs. But his praise for the producer is nothing but sincere and humble. “I’d say more than anything he’s taught us, which is a big thing for a producer to do—most producers help you with that record, but I think Phil has helped as musicians.” The first song off the EP they recorded together, “Call Me Disaster”, talks about vicious cycles in relationships, but this is one relationship that’s going strong. The band recognise that they can learn something from everyone, and that they’ll only continue growing by listening to their mentors and working on their craft.

It’s Okay Not to be Okay

“Because in hindsight it’s been a problem of mine / For my whole life, I’ve never fallen in line / Because I’m stronger broken, bleeding awake”

The biggest thing Milestones want you to take away from their music is this: “it is okay to not be okay.” Because in Hindsight—both the song and the word—you realise that you have to go through certain experiences to grow and learn to pick yourself back up again. “When I was growing up I used to get worried a lot that I was not okay,” he admits. I find myself nodding along on the phone despite the fact he can’t see me; this is a feeling I know well, and it’s safe to say we’re not alone. “It’s a process that you’ve gotta go through, and I think if people accept that they’re gonna be hurt because if they’re gonna embrace anything in life that’s gonna come next—they’ve gotta hit the ground running and expect that there’s gonna be a few grazes along the way.” They want to be the helping hand for those who need it most. This is such a powerful message that needs to be heard, and Clarke is doing it through his lyrics. But it’s not always easy; writer’s block can strike at any time, and being truly honest with yourself can be a battle. He pauses, struggling to find the right words to describe just how much the writing process helps. “I think that being able to put pen to paper with your emotions is really helpful to feel better.” For him, each song is a cathartic and earnest process, and he hopes they give that sense of release to everyone listening. 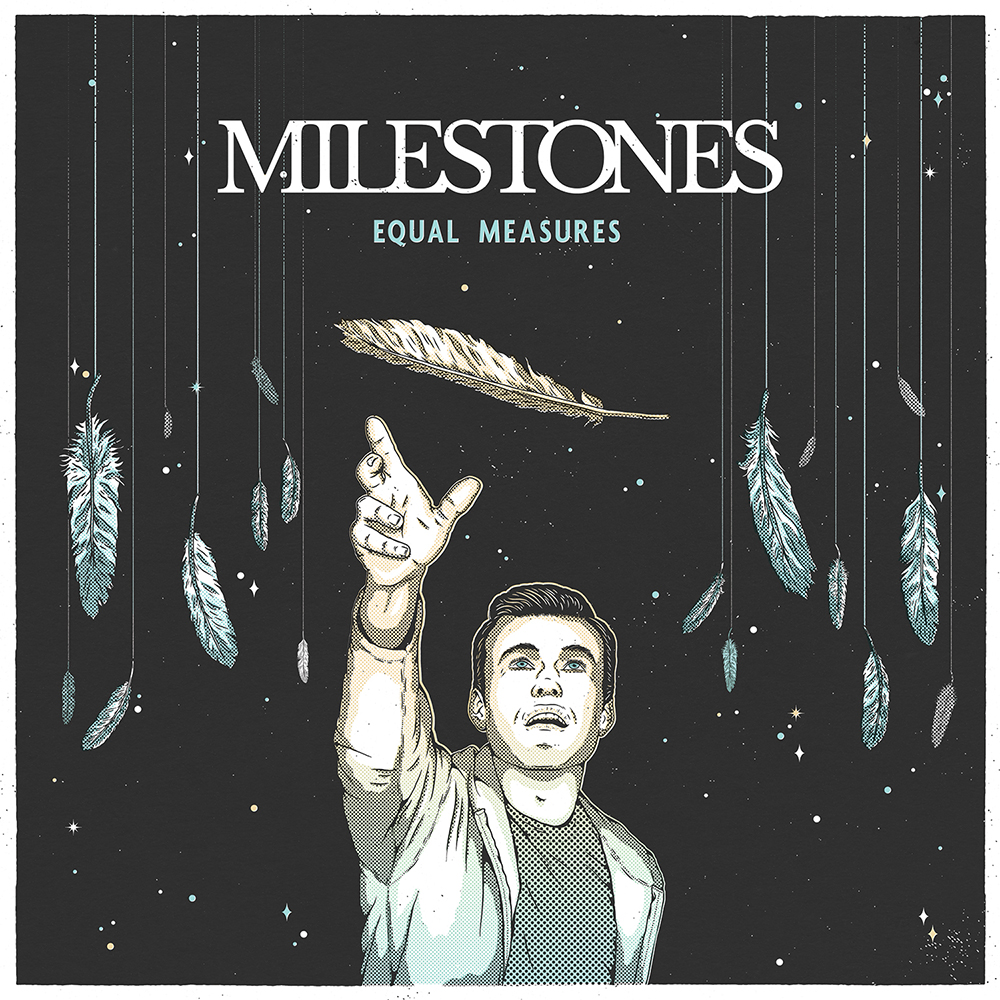 “I’ll make the dark my excuse / To feel asleep, to feel at ease”

Are you starting to get the idea that Milestones are pretty special? Well, here’s further proof: with just one EP, they signed to Fearless Records. “Nothing Left” is the song that first attracted the attention of Fearless, and a partnership soon followed. “Someone sent Fearless our EP and Bob [Becker] the CEO just loved it. He said, ‘holy saves the day, these guys are amazing’” Clarke quips proudly. And signing to the label was the right move. “We couldn’t have found a better fit,” he says. Plans for their debut full-length are well underway—“my ears wanna bleed right now I’ve been writing that much,” Clarke jokes—but for now, the band are focused on pushing the EP, and they’ve been enjoying the hard work of every step. Filming and releasing music videos definitely fall on the more fun side of the promotion spectrum. “The videos were amazing—bloody tiring—but they were really fun. It was weird, because I’ve never done any… like a storyline where I’ve not acted in it, so it was really hard to watch someone else do the acting thing, but I think it came out really cool.”

Looking Back to the Future

The EP may have just come out, but Milestones are already well on their way to completing their first full-length. “The newer songs for the album are ten times better than the EP,” he promises. Colour us excited; Equal Measures is an impressive debut already, and he assures me that the band have come a long way in the few years some of those songs were first recorded—the title track was written when Matt was just 17. But while he’s staunchly positive that he and the band have improved since then, he still remains on the side of humble. “We’d love to have dedicated fans from the EP. But we know we’re not gonna convert everyone,” he says. “But we just think, if we can get a kid to just like one song or think ‘Milestones, I know them’, and then give us a chance on the album, I think that’s when we start really converting people into proper fans.” And hearing the conviction in his voice as he talks about the new record, I can’t help but tell him how much I’m looking forward to hearing it. To which he laughs and says, “Me too!”

Okay, so back to that character we mentioned—the final song on the EP paints the picture of a manifestation from inside Clarke’s head. But the only things he’s giving away about the identity of this mystery character are already written in the words of the track. “That’s a secret,” he teases. “I have my own personal idea in my head of the colour of his hair, who he is and what age he is, but I want everyone else to create their own character.” He intends on fleshing out this character more with upcoming songs, but wants to leave it up to the listener to fill in the blanks. “I really wanted that to be a creative element for everyone so when they close their eyes they’re not restricted to a certain character, they can kind of create it bit by bit—with each release I will be hinting at who he is in my mind and people can kinda be like ‘oh okay that makes more sense’.” As if you didn’t have enough to look forward to from their upcoming full-length, by collecting these puzzle pieces you’re invited to become more than just a listener. Their music isn’t just for them; it’s for all of us—and isn’t that what true art is all about?

Five songs is never really enough to forecast a band’s longevity, their career, or their future. But Equal Measures is a damn good start, and after just one conversation with vocalist Matt Clarke, it’s clear Milestones has a lot to offer. With every track, they bring something new to the table and show promise of so many more surprises along the way. In doing so, they’re proving they have that well-rounded foundation that’s needed to make it in the scene—and they’re only just getting warmed up.