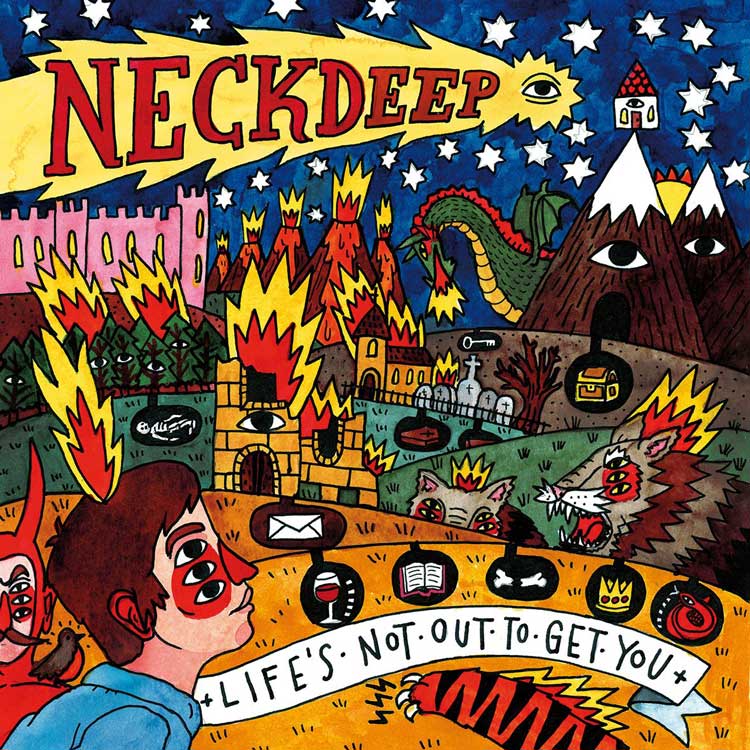 There’s More to Life Than Chasing Ghosts… Too often we fly through an album without truly understanding what the lyrics are trying to communicate. Bands spend countless hours writing random one-liners onto napkins, notebooks, plane tickets, or recording ideas into phone memos. All these pieces, these seemingly meaningless words, culminate into the foundation of an album. Neck Deep has carefully crafted the lyrics of Life’s Not Out To Get You to speak about the inconsistencies of life and how to move past them.

The album name whispers to listeners, encouraging them to go a little deeper than the music (go neck deep into the lyrics). “Gold Steps” is the anthem of the album, the poster child of all the songs. Its lyrics deserve to be dug into, exposed. The lyrics of “Gold Steps” can be best explained through this line of “Rock Bottom:” “The ebb and flow of life’s a mystery.” There is only so much we can control in life. Despite our attempts at organizing: writing endless to-do lists, and plastering any free space with a wall of sticky notes, moments happen that we never could have accounted for. Plans change. We could spend our days stressing about the unknown, or we could let go and move along: “So pick yourself up, you can’t change what’s been. You must go on and learn while you live and when you see the signs saying hope is up ahead, then you’re right on track for a better end.”

Neck Deep isn’t saying that shit won’t happen and you should never let things affect you. It’s important to feel emotions, process the experience, and then move on rather than avoiding the issue entirely. Instead, they’re urging listeners to realize that events happen as they do, sometimes out of one’s control, but it’s not the end of the world. “You say life has lost its meaning, and that’s true if you believe it, but some day you will stand above your demons.” We can’t let our past mistakes, current stresses, or possible future problems prevent us from enjoying each moment that we’re given in life.

Even in the most hopeless of songs (“Smooth Seas Don’t Make Good Sailors” or “I Hope This Comes Back to Haunt You”), Neck Deep gives listeners the bit of courage needed to make it through whatever life has recently presented. Lead singer Ben Barlow spoke to Alternative Press about the inspiration for the album, “I just don’t want to write songs that make people feel sad. I don’t want to write songs that make people down and make them think their life sucks, especially with a lot of kids self-harming. That is fucked. I don’t want to write a song that someone feels they want to self-harm to.”

When a band goes into creating an album with that determination–to make lyrics that speak to those who need to be spoken to–then the product of their positive vibes will inevitably create something meaningful. And Neck Deep succeeded. Each song in LNOTGY contains inconspicuous one liners, tucked away, waiting for the right moment to reveal themselves to those who need the inspiration. Those searching for a savior will uncover it. Through the lyrics in Life’s Not Out To Get You, Neck Deep reminds us all that “sometimes things will bend you, but trust me, you’ll be fine.”