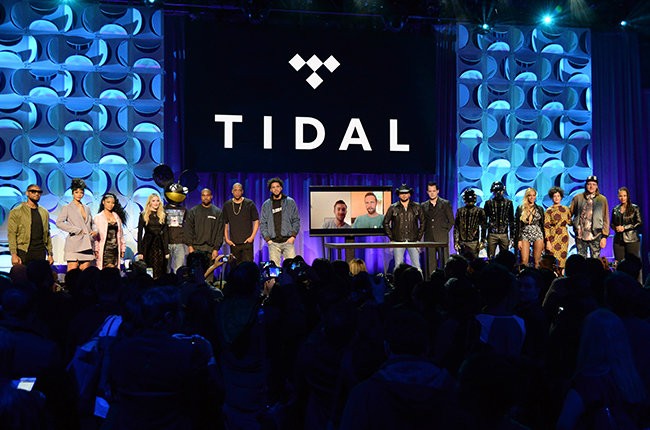 Jay Z. Beyonce. Rihanna. Madonna. Kanye West. Over the past few years these figures, among others, have been deemed members of the upper-upper echelon of music royalty: the kings and queens capable of doing whatever they damn well please. With the launch of Tidal, these entertainment powerhouses, along with 11 more of their peers, hoped to be the first to finally eliminate freemium as a standard in the streaming world. The initial announcement was brief, awkward, full of vague grandiose statements, and it was a bit of an elite circle jerk as they all stood there grinning at each other. The cringing lack of organization and presentation made it obvious that these artists thought they could rely on star power alone to make Tidal a success through the blind adoration of their combined colossal fanbase.

This star power, which Jay Z thought would be Tidal’s greatest advantage, has turned out to be their greatest disadvantage. 16 billionaires on a stage demanding more money left a sour taste in most people’s mouths. To make matters even worse, the original $20/month payment plan (twice what Spotify charges) in exchange for high quality audio that can only be enjoyed on top-notch sound systems unaffordable to most was like rubbing salt in the wounds of Tidal’s potential customer base. Tidal also failed to note Spotify’s other major problem, besides the much-debated freemium model. The Big Three (Universal Music Group, Warner Music Group, and Sony Music Entertainment) are able to hoard millions of dollars of Spotify’s profits in the form of exclusive licensing guarantees and ownership equity in the company itself. These funds, coined “breakage,” cannot be traced back to a certain play of a certain song and therefore the three major label conglomerates decided there was no need to let any of it trickle down to the many independent labels and artists under them. Combined, the major labels own about 20% of Spotify and are already able to extort this much profit. Tidal’s 16 stakeholders each own 3%, meaning they own a total 48% of Tidal. Essentially, it just looks like another set of billionaires looking to exploit the work of many, only this time they sing, too.

Backlash towards Tidal’s oligarchic aura was swift and imminent. The official #TidalForAll slogan led to the viral spread of the derisive #TidalForNone hashtag instead. Other artists soon spoke out as well, making the 16 stakeholders’ perceived front of universal unity for music appear even more foolish. Lily Allen was one of the first to speak up, tweeting on the same day as the announcement her concerns that Tidal would cause consumers to revert back to music piracy. While I think people are much more likely to remain on Spotify’s freemium plan rather than react as drastically as to abandon streaming altogether, I agree with most of her other worries. She’s one of the only Tidal critics I’ve seen speak out on the breakage issue as well. Mumford & Sons, an act on financial par with several of the stakeholders, criticized Tidal for being tribal, with band member Winston Marshall calling the service “commercial bullshit,” and saying, “We want people to listen to our music in their most comfortable way, and if they’re not up for paying for it, I don’t really care.” Ben Gibbard of Death Cab For Cutie was pretty much spot on when he said, “They totally blew it by bringing out a bunch of millionaires and billionaires and propping them up onstage and then having them all complain about not being paid.”

Tidal has been scrambling to play defense ever since its launch, with every blunder being captured by the media. Just weeks after the announcement, Tidal was back in the news again due to reports that it had fired 25 staff members, including its CEO, a clear sign of instability within the company. Around the same time, it was revealed that Jay Z and Jack White were personally calling subscribers. While it may have been a previously prepared move to connect with customers, it came off as yet another desperate, feeble attempt by the stakeholders to utilize their celebrity. The media has proven to be relentless, even catching when Kanye West deleted all his tweets about Tidal then further exposing his realization that he’d been caught and his flimsy attempt to make up for it. Just recently, in a shockingly poor business decision given the current circumstances, Tidal quietly increased the prices of both their plans by 30% to $12.99/month and $25.99/month.

In what seemed like a moment of exasperation, Jay Z took to his Twitter in hopes of finally staving off the backlash. Unfortunately, it did little to prove Tidal’s merit. He addressed the complaints of billionaires asking for more money by comparing Tidal’s meager equity of $60 million to the multi-billion dollar equities of YouTube, iTunes, and Spotify, of course while conveniently leaving out any of the stakeholders’ personal equities. He finally revealed Tidal is paying out 75% of its income in royalties, a figure that should have been the focal point of the initial announcement not buried in an unofficial tweet. While this is definitely one of the highest digital royalty rates (both Spotify and iTunes pay 70%), there’s still the unspoken fact that the 16 wealthy stakeholders will be collecting the other 25% along with their sure to be hefty royalty checks. The consistent lack of mentioning breakage also leads me to assume Tidal is producing breakage as well, due to the incredible difficulty of securing content from major labels, especially the exclusive content so important to Tidal.

Overall, Jay Z’s tweets ask for time to let Tidal prove itself, which I do agree with. Success in the music industry takes much more time and planning than people realize. That breakout “overnight sensation” that everyone is lauding was actually signed to a development deal years ago. I was skeptical towards Spotify at first when it launched in the US, and now about two years after subscribing, I can’t imagine living in a world without streaming.

Yet, even without the firestorm of negative press, it will be quite a challenge for Tidal to break Spotify’s majority hold on the streaming market. Change is difficult overall. People like what their friends like and are unlikely to be the first to try something new. Spotify is like the music streaming world’s Facebook. Many will grumble about its features and declare it’s on the decline, yet everyone still uses it simply because everyone else is still using it and it continues to grow. The platform that has the best shot at resetting the playing field is Apple’s reinvention of Beats Music, set to launch in June. Apple has an incredible track record with revolutionary innovation and utter technological dominance. People may line up for several hours outside for a Jay Z concert, but they don’t camp out for weeks in the rain the way they do for a new iPhone.

Still, that doesn’t mean Tidal should be completely ruled out of the game. A recent article was published highlighting all of Tidal’s features that would benefit the independent artists: essentially the written form of exactly how the launch should have gone. One of the most fascinating features is Tidal Discovery, which intends to let artists distribute directly onto Tidal. Currently, all artists must go through a third-party service (eg. TuneCore, CDBaby, INgrooves) that distributes their music in exchange for both flat-rate and percentage fees. These fees can be quite a financial burden to an emerging artist. Tidal Discovery has the potential to be an actual game changer that would not only cause both musicians and their fans to flock to Tidal, but could eventually eradicate expensive distribution fees for all platforms. I would consider Tidal’s superstar pantheon a distracting handicap at this point, but if the company can organize itself better and focus on implementing these genuine features beneficial to all artists, it may actually have the impact that Alicia Keys spoke so grandly of during the launch.