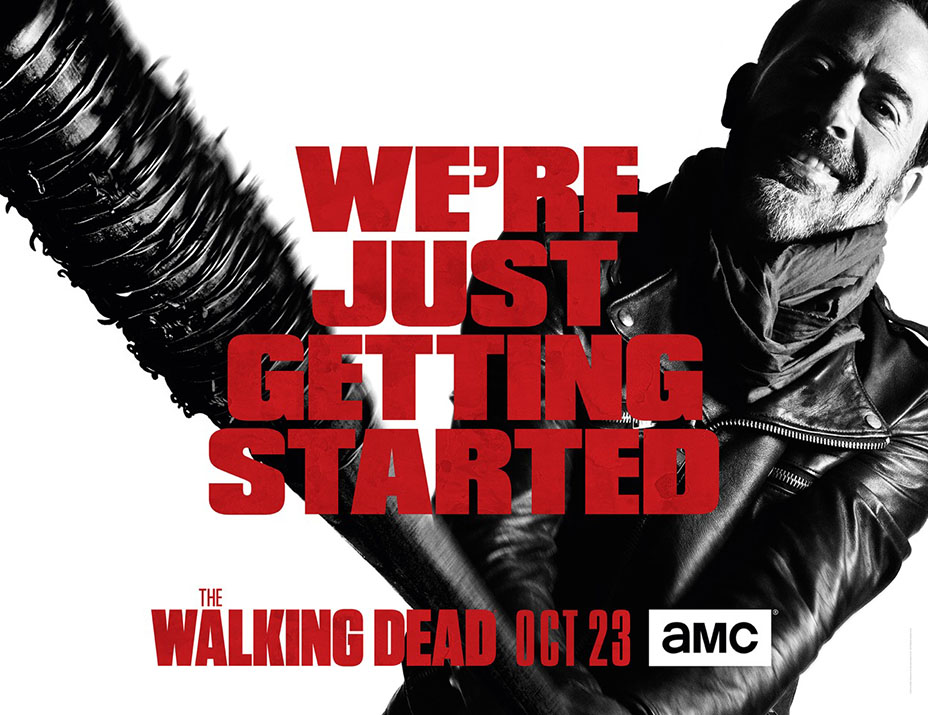 Spoiler alert – Glenn is dead but he ain’t walkin’…

You would think that it would be impossible to top the outcry generated by the third and final presidential debate, but AMC’s The Walking Dead arguably managed to do just that with its Season Seven premiere, screened on October 23. The fallout has been unbelievable. And why? Because a fictional character that we enjoyed watching took some hard hits to his fictional head?

Let’s recap. Season Six ended with Rick Grimes’ crew getting captured by Negan, portrayed with glorious relish by Jeffrey Dean Morgan (The Comedian in The Watchmen and Thomas Wayne in Dawn of Justice). Fans of TWD comic books are already aware that Negan, armed with his faithful barbed wire-wrapped baseball bat Lucille, is nut-ball loopy. The season ended with our heroes all in a circle on their knees, and Negan standing over them. The controversial cliffhanger saw him thwack someone, leaving us to wonder which character had gone into fictional horror character heaven.

So Season Seven kicks in. Beloved, though testosterone-fueled, military man Abraham is dead, though not before a hearty “suck my nuts” is uttered. Question answered? Not quite. Thanks to an idiotic display of masculinity by the crossbow-wielding Daryl Dixon, Negan felt compelled to go again. This time, fan favorite Glenn Rhee gets it, though his demise isn’t quite as dignified as Abraham’s. There’s no “suck my nuts,” this time. Just a popping eyeball, some spluttering, and a call to pregnant wife Maggie that he’ll find her, presumably in another life.

Frankly, the episode was tremendous. The performances were superb, the pacing was excellent, and the reveals were shocking, even to those aware of the comic book goings-on. The make-up and special effects, meanwhile, were exemplary, and Morgan’s monologuing just wild. There might be some Emmys in this episode’s future. The outcry in the mainstream press and on social media, however, has been nothing short of ludicrous.

Let’s examine those words and soundbites.

Art, no matter the medium, doesn’t have any responsibilities other than to satisfy the creators. Anything beyond that is a bonus. But it’s at its best when it pulls genuine emotions from people outside of the creative process. When we watch It’s a Wonderful Life, and go on the emotional rollercoaster with George Bailey. When our favorite ballad makes us stop and disappear inside ourselves. When we re-read our favorite novel for the umpteenth time, perhaps because of the warmth that it generates. And when we watch some extremely violent horror and feel punched in the gut—repulsed, angry, dammit horrified.

Was TWD’s premiere violent for the sake of it? Of course not. This whole season, and perhaps future seasons, will see events unfold as a direct result of what just happened. In movie terms, we just watched the first ten minutes. But even if it was, so what? It’s not real violence.

Look at it this way—the majority of the people outraged by TWD probably have no idea what was going on in Aleppo, in the real world, at the same time.

Did it manipulate its audience? Perhaps, but don’t we expect that from shows with multiple seasons? I’m okay with it.

As for those other words, like “vicious,” and “sadistic,” sure. I’ll bite. It was. Long may it remain so.

Now, just to be clear, a show like The Walking Dead and movies like the Guinea Pig series, or Martyrs, A Serbian Film, etc, are not for everyone, much like comic books like TWD and Crossed. Nobody should suggest that there is anything wrong with not liking that material. Everyone has their thing. Some people, inexplicably, like Hugh Grant movies and Two Broke Girls, and I would suggest those things are far more guilty when it comes to the dumbing down of society.

Resentment surfaces when people suggest that there is something wrong with liking extreme horror, that it should be banned, that it shouldn’t exist, and that it’s harmful.

Nonsense. Pure nonsense. This writer is a loving father and husband and, when faced with real images of suffering, whether it be from a war-torn region on the news or perhaps a video that pops on on social media showing cruelty to animals, I feel it deeply. But the technology doesn’t exist, no matter how impressive the CGI and makeup gets, to turn something that isn’t real into something that is.

So rest easy, America. The actors are fine, and will probably be on the TV playing a different character in 2017.

The third debate in the trilogy was, quality-wise, clearly more The Human Centipede 3 than Return of the Jedi, with more of the same intolerable childishness from Trump. Clinton won. It’ll all be over soon. Thank God.

Tags: AMC, Callwood at the Cooler, The Walking Dead, TWD