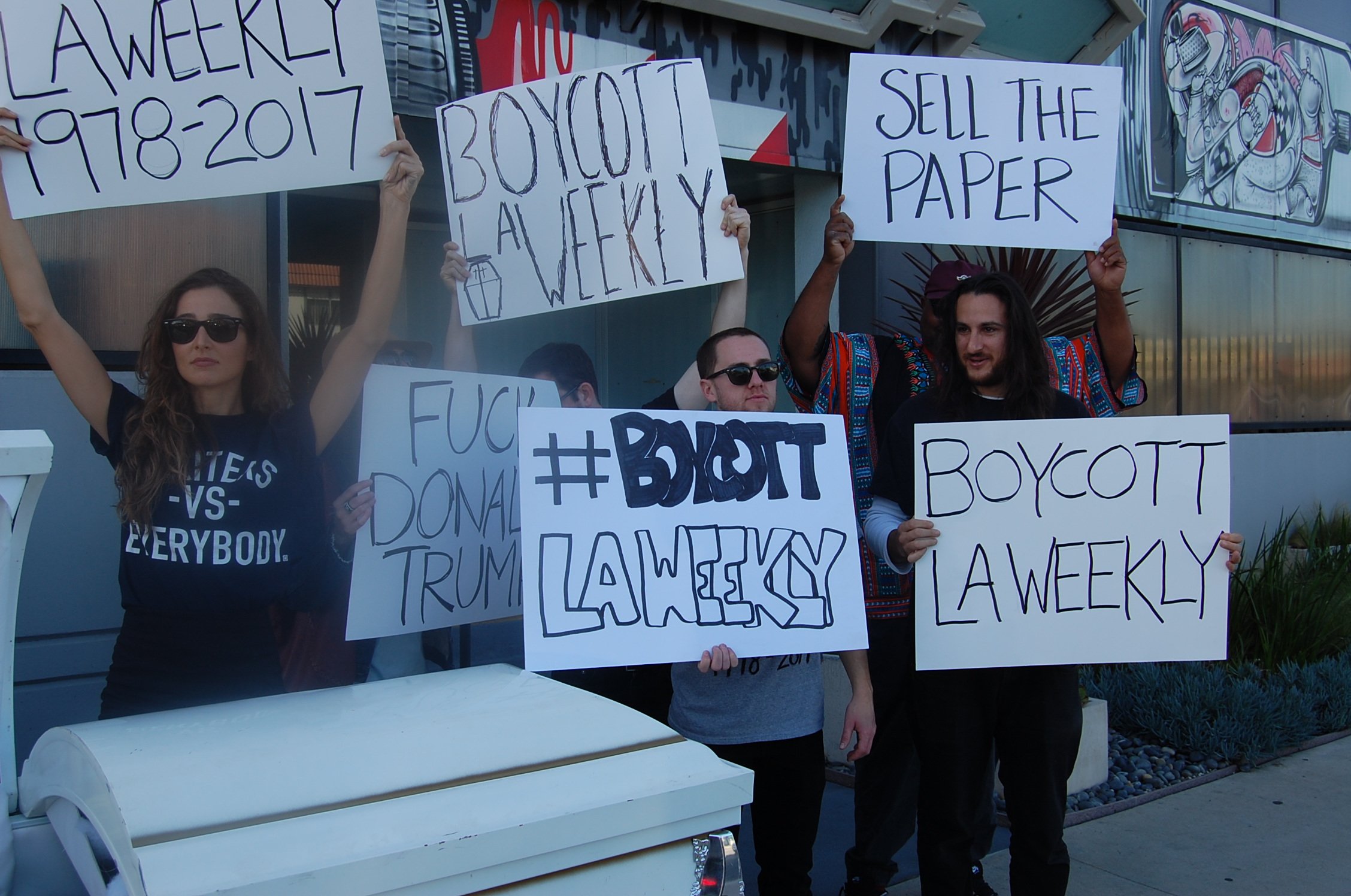 The plight of the alt-weekly…
The last week has been more than a little harrowing for those of us trying to forge ahead with a career in journalism.

Full disclosure, before I continue here: I have freelanced for the LA Weekly since March 2016. I also write regularly for the OC Weekly, the Denver Westword, the SF Weekly, and the Tucson Weekly. For six years between 2008 and 2014, while I lived in Michigan, I was heavily involved with the Detroit Metro Times, and for the last of those year I was the music editor there.

I know and love alternative weeklies. They provide a vital voice— politically, socially, culturally, artistically—to those who might not have an outlet for that voice anywhere else. Frankly, alt-weeklies are one of the things that I love the most about this country (there’s nothing like it in my native England).

But Christ, this year has been tough on many of the publications. New owners seem to have swept in across the nation and gutted them. As of this year, there’s no longer a print edition of the Village Voice in New York—long a vital ingredient to the culture in that vibrant city.

Los Angeles is burning…
When the LA Weekly was put up for sale earlier in the year, by former owners Voice Media (who also own the Denver Westword, Phoenix New-Times, and more), eyebrows were raised. The group had already sold the Village Voice in New York and now it was letting go of LA. Why not have a presence in these two giant cultural cities? But ok, there must be business reasons that mere journalists and normals don’t understand.

When it was announced that the new owners of the LA Weekly are a group called Semanal LLC, those same eyebrows hit the ceiling. Nobody knew anything about the new owners, least of all who they actually were. Things went very, very bad, very, very quickly.

On Wednesday, November 29, just after the sale was finalized, nine of the 13 editorial staffers at the LA Weekly were laid off.  Two days later, on December 1, one of the new investment team, Brian Calle (formerly a columnist at the OC Register), posted a story called “And the New Owners Are…”

“We appreciate that people have been expressing their support for L.A. Weekly over the last couple of days. It was once a richly influential and important cultural force in Los Angeles, which gave it vitality both as a journalism platform and as a business. I’m sure many reading can remember a time when we used to pick up an issue every week, read its features and refer to it multiple times to help decide weekly social and cultural activities.”

It was perhaps the next paragraph which people objected to the most:

“As media marched forward into the digital age, however, print publications saw innumerable challenges and L.A. Weekly [sic] has suffered as a result. It wasn’t inevitable. And today, perhaps more than ever, we need media organizations, like L.A. Weekly [sic], to become reinvigorated journalistic voices in the new media landscape. It’s disheartening that the Weekly has been on a declining trajectory. Our goal is to turn it around and see it grow.”

By saying that “it wasn’t inevitable,” Calle was clearly suggesting that the award-winning former staff hadn’t been good enough. 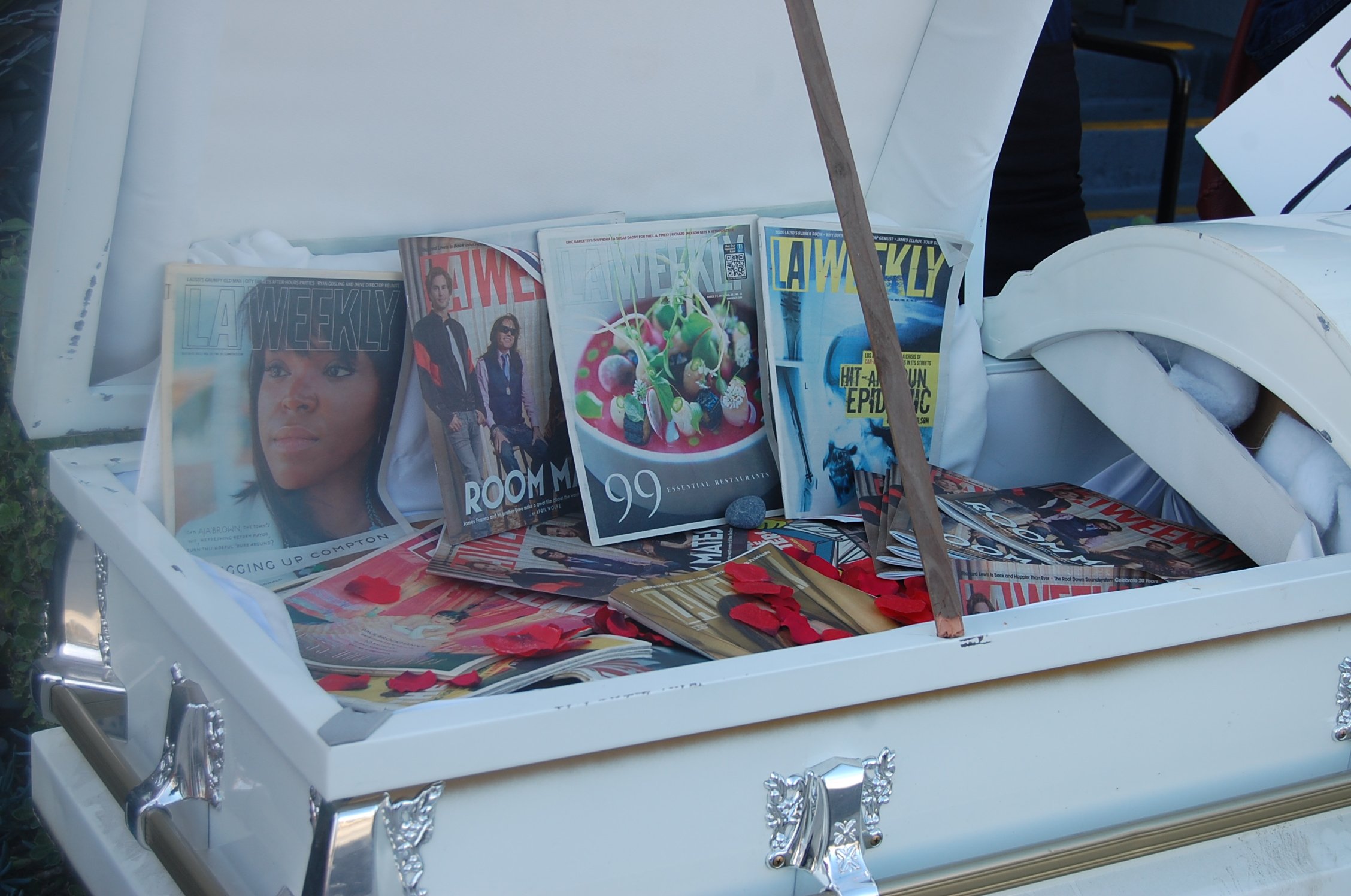 The backlash has been swift and brutal. Columnists, including Henry Rollins, have decided to no longer contribute. The rumors are that advertisers are backing out at an alarming rate, encouraged by the #BoycottLAWeekly movement. There was a funeral held for the publication at noon on Friday, December 8, at the LA Weekly office. A coffin was filled with old issues.

So it came as no surprise when, at 5 p.m. on that same Friday, a statement was released on the LA Weekly Facebook page.

“We have made numerous missteps in the transition of new leadership at L.A. Weekly. We acknowledge it. We own it. We apologize for it.

“Our missteps have allowed rumor, conjecture, and misinformation to eclipse fact. False narratives have snowballed in part because we have not adequately provided our vision and plan for the Weekly’s future to the public…

“Beginning today, Hillel Aron will take over as Interim Editor. Aron will be responsible for all editorial content at the Weekly. He will have complete independence and autonomy from the business side of the company. He’ll also create an Editorial Advisory Board made up of veteran progressive Angeleno journalists to ensure that the Weekly preserves its progressive voice.”

The statement addressed the concerns that the new owners are Republican donors from Orange County (some of them are), that they want to change the traditionally-left political slant of the paper (they say they don’t), and they they want to use unpaid writers (they do, but not exclusively). Aron will be allowed to run the editorial side of things, which is slightly reassuring.

So that’s where we are. The laid off staff remain laid off, although Aron has been told that he can rehire two of them (who knows what that will look like). Much of everything else remains uncertain.

As for me, I’ve literally just filed a feature with them that was commissioned by the former music editor before he was let go. I’m a professional and I do the work that I’m assigned. What the future holds regarding that publication is uncertain. But two weeks ago, the LA Weekly was a publication I was proud to write for. I have to be certain that remains the case before I pen another word.

But everyone, absolutely everyone, should care. Because the danger is that these alternative voices are being stripped away. Just think about that.