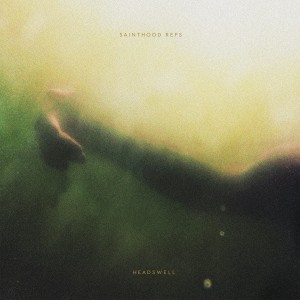 Let’s face facts: Sainthood Reps love Brand New. Of course this makes complete sense as guitarist Derrick Sherman is a touring member of Brand New and Long Island has always bred an iconic emo-punk sound. With that in mind, Sainthood Reps continue to carry the torch of their contemporaries with their second full-length, Headswell.

“Shelter” opens the album with garage-rock riffage and the punky shouts of frontman Francesco Montesanto. Driven by abrasive power chords and feedback, it is easy to assume that Headswell is going to be a 90’s punk album. “Desert Song” refutes that notion as Montesanto sports a cleaner, wavering vocal – although still very urgent – as he confesses, “I was raised to start a war/I never heard a soul before.” This refrain is repeated in the massive chorus as sludgy instrumentals reinforce the emotional tension, while still providing a head-banging catharsis.

“The Last Place I Left You” hints at a more melodic side of the band, while “Drone” speaks for itself with its droning vocals and fuzzy guitars. “Fall” is a beautiful melodic song featuring primarily clean guitars that sweep you into pure contemplation.

“Run Like Hell” doesn’t sound like Pink Floyd, although it does sound like Nirvana – especially its opening riff, which could almost be mistaken for “Heart Shaped Box” on first listen. With its intricate guitar work and constant contrast in dynamics, this song makes you feel like you are confined and need to get out as quickly as you can. We can finally feel liberated when the last chord hits and feedback rings out.

Title track “Headswell” is another punk song, yet it features a very interesting bridge section with interlocking clean guitars as Montesanto repeats, “They don’t believe in us / They told us not to love.” This track really exemplifies the entire album as it reveals a whole spectrum of influences from punk and hardcore to indie and post-rock.

“Quitter” and “Rapture Addict” could have easily been on Brand New’s The Devil and God Are Raging Inside Me, serving as nice interludes into “Breath Worth Breathing.” This final track is brilliant and different from the rest of the album while still staying consistent with the other tunes. It’s an acoustic anthem that would please Neutral Milk Hotel any day of the week. This song is mostly in a major key, yet it contains some of the most emotional, melancholy, and personal anecdotes on the record. One of the best moments is when Montesanto hopelessly half screams, “I lost track of myself and I’m afraid I’ll never find it again.” The album ends with perhaps its most memorable message, “I’m not gonna waste another thought on you,” which is something anyone in the world could relate to if they have ever felt spent holding onto something that is toxic.

Headswell is a respectable follow-up to the band’s 2011 debut Monoculture. The band has settled nicely into their niche indie-punk sound. It will be interesting to see how Sainthood Reps evolves with future releases; they are certainly on the right track with Headswell.