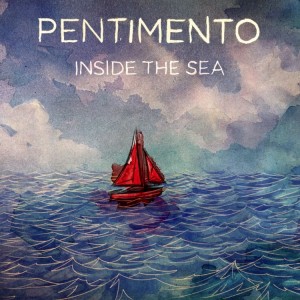 Buffalo, NY’s Pentimento have become a staple of the modern scene for their hard work, determination, and sincere punk rock ethos.  The band’s 2012 self-titled album proved to be true reflection of their artful indie-punk sound and Inside The Sea is a remarkable follow-up EP that displays an even bigger confidence and authenticity.

“Not So Young” opens with strummed guitar chords and a crescendo snare roll-as one would expect in any given punk rock situation. It is this familiarity that draws us into the record right off the bat, as well as Jeramiah Pauly’s delicate vocals, which have a smart and melodic way of delivering hard-hitting lines with integrity. Pentimento have an indescribable energy and cohesiveness that can be heard in the chorus as Pauly belts, “Is this all I am? / Is this everything that I am meant to be?” and group “whoa’s” carry us into a sea of angst and emotion. The guttural half screams of drummer Mike Hansen drive the ending of the song to a beautiful release, allowing us to feel depleted, yet contemplative.

“Just Friends” narrates the inner-monologue of Pauly as he confesses, “I’m in between dÃ©jÃ  vu and delirium, remembering things that haven’t happened yet.” Bassist Vinny Caito drives the verse with his articulate lines as the band constantly plays with dynamics to go from extremely intimate and personal to abrasive and confrontational.

A clean, arpeggiated guitar sweeps us into “Any Minute Now.” Tension builds as the guitar starts to breakup and Hansen cries, “And it begins” as Pauly picks up on the verse in a call-and-response fashion. The constant wavering of dynamics and tension is consistent with the themes of change and uncertainty. This track definitely shows that Pentimento haven’t strayed too far from their pop punk roots.

“It’s Okay” is the most self-defining track on the album. Pauly croons over a strummed electric as he hopelessly confides, “Let’s be honest, you already had your mind made up before I even had a chance to plead my sorry case / But it’s okay.” When the full instrumental kicks in, it is impossible to overlook Lance Caito’s crafty lead guitar work as it carries into bass driven verses and a grandiose refrain. This sincere and passionate ending, marked by the repetitive shouting of “It’s okay,” adds a nice touch of optimism to a rather troubled and emotionally fragmented record.

Inside The Sea is a solid effort from Pentimento. It is obvious that the band is leaning more toward an emo/punk sound and trying to part ways with pop punk. There will always be traces of those roots in their music, but Pentimento are constantly refining in order to innovate and solidify their sound. This record has proven that the band can reach new sonic territory with confidence and vigour.