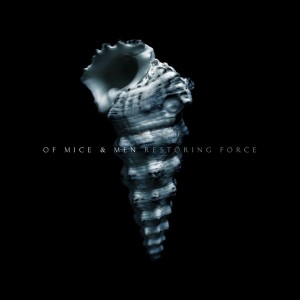 Of Mice & Men have always been known for being a frontrunner in mainstream metalcore. But with their fourth full-length Restoring Force, the band has affirmed that they aren’t just another name in the constantly growing roster of great metal bands – they’re the kings of the genre.

If there’s one complaint to have about Restoring Force, it’s the song it kicks off with. “Public Service Announcement” doesn’t reach the bar the rest of the collection raises. From there, though, is where the album gets interesting. The second track, “Feels Likes Forever,” takes the band into unseen radio rock territory and has a beat that will get you headbanging uncontrollably no matter where you are.

“Bones Exposed” sees the band return to the ferocious state found on 2011’s The Flood, but only for a moment as the next song, “Would You Still Be Here”, slips back into the radio rock feel of “Feels Like Forever”. One of the better songs on the album, it showcases frontman Austin Carlile’s clean vocals and make you wonder why they weren’t on display as much in the past.

The album’s fifth track, “Glass Hearts”, starts out electronic and eerie and almost calls to mind bands like Linkin Park, but as soon as you think you have grip on it, the song breaks into a huge metal track that doesn’t disappoint. Fierce, loud, and absolutely pounding, many great moshpits are waiting to be started in its midst.

Arguably the album’s best track, “Another You” is something to be treasured. The slow and brooding intro slips right into your veins. The chorus holds a perfectly measured mix of melodic rock and heavy metal, flowing into a second verse that’s just as stunning as the first.

Next up is “Break Free”, which might not be the best song on the album but does hold one of its best moments when Carlile belts, “You won’t break me!” with a passion only a dedicated vocalist could. “You Make Me Sick” and “Identity Disorder” keep up with the pace, balancing metalcore and hard rock with lyrics soon to be plastered all over your Tumblr dashboard.

“You’re Not Alone”, the album’s first single, is a good summary of Restoring Force as a whole. It’s fast and hard, but at the same time has the melodic sense that makes this collection so different from what the band has done before — not to mention Phil Manansala gives the art of playing guitar new life on the track.

The fact that the album has to end at all is a disappointment, but if it has to, “Space Enough To Grow” is the best way to do it. The final song feels like the band taking a breath after the onslaught that is Restoring Force. With a spacey vibe and shimmering guitar, it charges the air around you with the possibility of new beginnings. “Space Enough To Grow” also holds the best moment of the album in its final line — Carlisle asks, “What do you see when you close your eyes?”, a fitting prompt for fans to close their own and let themselves absorb what the past forty minutes have held.

Over the past few years, Of Mice & Men have created an empire behind their eyelids. Now, with Restoring Force, we get to see them follow it through.