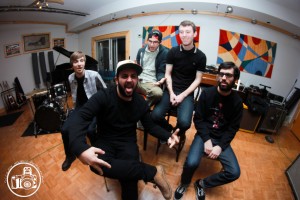 March 1, 2013  — idobi Radio have joined forces with New Jersey’s own pop-punk favorites Man Overboard for a brand new show. “Man Overboard Radio” will air every Monday at 7pm ET on the station starting March 4th. The show promises to be a riot as the band brings you some of their favorite music as well as interviews and pure ridiculousness.

Man Overboard Radio: New Jersey’s finest take to the airwaves to bring you mindless banter, the most unprofessional interviews you’ve ever heard, and music from the vast unorganized catalog in their A.D.D.-riddled brains.

Man Overboard will release their third full-length Heart Attack May 28th on Rise Records. On March 8th the band kicks off the Suppy Nation Tour across North America with long-time friends The Story So Far

Tune in to the first episode of Man Overboard Radio this Monday at 7pm ET only on idobi Radio!

Dom (Merch Manager) – aka TheDommm. Dom’s got stories from his past and he’s going to share…. strap in.

JohnK (Guitar Tech) – John has never heard a Man Overboard record. He loves Purling Hiss and The Bronx. He slicks his hair and primarily wears boots.

idobi Radio (idobi.com) is a modern rock internet radio station providing a curated music experience focused on new music and artists. The station’s original programs include Man of the Hour, First Person w/ Josh Madden, The Gunz Show, and more. idobi Radio reaches a worldwide audience of over 2.5 million listeners every month, earning it the title of the #11 online station in the US and #16 across the globe as certified by Triton Digital. The station is also #1 in the entire world for average Time Spent Listening (TSL), far surpassing both corporate giants like Clear Channel and personalized streaming services like Pandora when it comes to listener engagement — all while staying an independent company. idobi Radio – a new media leader.