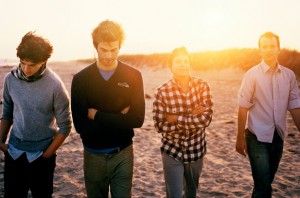 New York band Vampire Weekend’s sophomore set Contra debut at No. 1 on the Billboard 200 with 124,000 copies sold according to Nielsen SoundScan. The set is only the 12th independently distributed album to top the Billboard 200 chart since SoundScan began powering the list in May of 1991.

Vampire Weekend not only celebrates its first No. 1 album on the Billboard 200 chart, but the New York band also notches its best sales week yet. The quartet’s previous best sales frame was earned when its self-titled first album opened with 28,000 copies in its opening week. That set debuted and peaked at No. 17 on the chart and has since sold 498,000.

Contra also is the second independently distributed album to hit No. 1 on the Billboard 200 chart in the past year. It is distributed by Alternative Distribution Alliance and marks the first indie set to top the tally since Pearl Jam’s self-released Backspacer debuted at No. 1 on the chart dated Oct. 10, 2009.

The album is the lone debut in the top 10 this week, as the second-highest entry comes from Omarion’s Ollusion at No. 19 with 19,000 copies. This isn’t out of the ordinary for January, as the month’s release schedule is usually light on blockbuster new albums.

As for the rest of the top 10 this week, Susan Boyle’s I Dreamed a Dream holds at No. 2 with 77,000 (down 18 percent), marking its eighth straight week within the top two slots. There’s a chance the album could return to the No. 1 position next week, as it’ll probably benefit from the singer’s sit-down interview and performance on Tuesday’s “The Oprah Winfrey Show”.