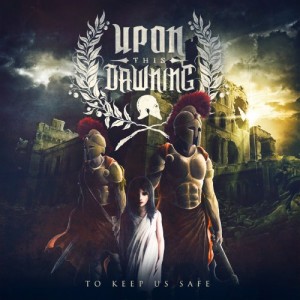 Upon This Dawning are a foreign band making a local splash. Their debut album To Keep Us Safe, released by Fearless Records, showcases the band’s dedication to their brand. Hailing from a culturally rich town like Verona, Upon This Dawning bring some of that into their music.

The record has its ups and downs, but gets off to a strong start with “A New Beginning” which begins the album’s heavy assault on your senses. Electronic additions to songs can either detract from or solidify a song, and “Of Human Action” and “From Hell To The West” and “Sons of Venice” all contain electronic pieces that support the basic melody of the song. The electronics in “Of Human Action” switch between being the main focus and just being there to accentuate the rest of the song, while “From Hell To The West” uses electronics to help transition from the clean vocals to the screaming vocals. Some parts of the album have abrupt changes in the music which can distract the listener, but this song in particular does a fantastic job transitioning. Vocalists Gianluca Molinari and Matteo Botticini work together to put together songs that are vocally diverse. “Blood Is Thicker Than Water” has a little more trouble switching between vocal types but makes up for it with their harmonizing throughout the song.

Upon This Dawning combine different types of music and instrumentation to create a listening experience you won’t forget. “Nothing Lasts Forever” is a song that is coordinated perfectly. The more aggressive parts of the song compliment the smoother style also included. “One And Only” and “Lux” have an alternative feel to them when the clean vocals kick in. “The Sound Of Your Breath” has a slow metal feel, dragging delicately across your ears while still staying just as loud. If any song stands out on this album it would be “All In Your Head.” A dreamlike tune that lives up to its name “All In Your Head” is a quieter and calmer song. Don’t think it’s your speakers — the whole song is toned down a bit. “The Path” takes some of that effect and channels it into one instrument, the guitar. Among the fast and vicious energy of the song is a guitar line that soothes the beast lurking in the album. “Vessel” closes the album with a constant level of energy that sums up the album in a sweet three-minute package. Throughout the melodies and vocal exploration, Upon This Dawning have brought audiences an album they can tune in to.

With a hard aspect that pleases heavier music fans and clean vocals that will have listeners swooning, Upon This Dawning are sure to win over audiences on multiple continents with this album. Weaving electronics into their songs embroiders the album colorfully and gives it some flavor. To Keep Us Safe will certainly leave a good taste in listeners’ mouths.

Tags: Upon This Dawning