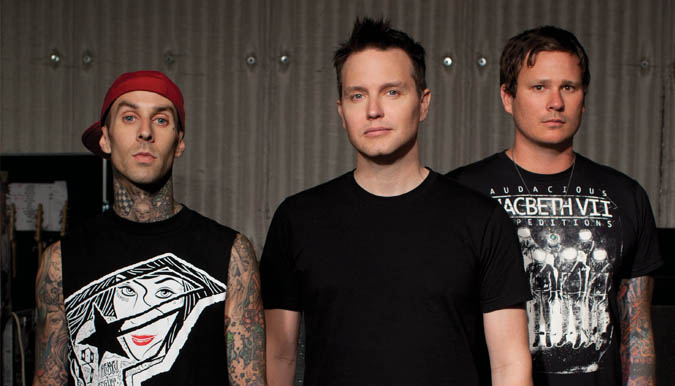 Update #3: In response to the Rolling Stone interview with Mark Hoppus and Travis Barker, Tom Delonge has posted a further statement. Read the full thing here and an excerpt below.

I told my manager that I will do Blink 182 as long as it was fun and worked with the other commitments in my life, including my family.

But Mark and Travis know all of this.

I wrote this same letter to them a year ago. But it created a massive argument, the biggest one yet actually. I just wanted us to do things we all agreed on. But that was their moment to dig in. From their view I was controlling everything. In reality, I was scared to put myself out there again. To repeat the EP experience.

I also wrote all of this to their managers this past December (who told me my bandmates weren’t angry and agreed with some of my ideas of how to grow the band).

So you can imagine my surprise when a press release went out yesterday–without my knowledge–about the band’s future. This is new to me. It’s not in my nature to fuel negativity about the legacy of the band on something as trashy as the Internet world.

Update #2: Rolling Stone has posted a tell-all interview with Mark Hoppus and Travis Barker regarding the current state of blink-182. Hoppus and Barker have confirmed that today’s original statement was sanctioned by them and that Delonge’s “actions speak louder than words” when it comes to his lack of interest in playing with the band. Read the revealing full interview here.

Hoppus: At the end of December, we were finalizing our record deal and on Christmas Eve, all three of us signed the deal. We had been talking about where we wanted to record, what producers we want to use, what day we want to start. This is all through e-mail. I don’t think either of us have spoken to Tom in person in months, but everything’s been moving positively.

We booked January 5th to go into the studio. On December 30th, we get an e-mail from Tom’s manager saying that he has no interest in recording and that he wants to do his other, non-musical stuff and that he’s out indefinitely. There’s a flurry of e-mails going back and forth for clarification about the recording and the show and his manager sends [an e-mail] back saying, “Tom. Is. Out.” Direct quote. This is the exact same e-mail we got back in 2004 when Tom went on indefinite hiatus before.

Barker: I think he’s just bummed because Mark and I were finally honest. We always covered up for him before. It was always, “We’re going to record an album,” then “Tom refuses to get into the studio without a record deal.” So everyone does hella amounts of work to get a record deal and now Tom isn’t part of Blink-182. It’s hard to cover for someone who’s disrespectful and ungrateful. You don’t even have the balls to call your bandmates and tell them you’re not going to record or do anything Blink-related. You have your manager do it. Everyone should know what the story is with him and it’s been years with it. When we did get back together after my plane crash, we only got back together, I don’t know, maybe because I almost died. But he didn’t even listen to mixes or masterings from that record. He didn’t even care about it. Why Blink even got back together in the first place is questionable.

Update #1: Tom Delonge has released a statement saying that he has not, in fact, quit the band. Read the message from his Instagram account below:

To all the fans, I never quit the band. I actually was on a phone call about a blink 182 event for New York City at the time all these weird press releases started coming in… Apparently those releases were ‘sanctioned’ from the band. Are we dysfunctional- yes. But, Christ….

He released a second statement through his publicist:

Contrary to reports, Tom DeLonge has not left Blink 182. “I never quit the band,” he says. “Actually, I was on the phone discussing a possible Blink-182 event in New York City when I heard the ‘news.’ The ONLY truth here is that I have commitments that limit my availability this year. I love Blink-182 and I’m not leaving.”

According to a report from CBS Radio, Tom Delonge has left blink-182 after 22 years together to focus on “non-musical endeavors.” Read a statement below.

Matt Skiba of the Alkaline Trio will join Blink-182 in replacement of Tom DeLonge at the 8th annual Musink Music and Tattoo festival. “We were all set to play this festival and record a new album and Tom kept putting it off without reason. A week before we were scheduled to go in to the studio we got an email from his manager explaining that he didn’t want to participate in any Blink-182 projects indefinitely, but would rather work on his other non-musical endeavors.” Travis Barker and Mark Hoppus plan to honor all Blink-182 commitments including the Musink Festival and are excited to have singer/guitarist Matt Skiba join them for this project. “No hard feelings, but the show must go on for our fans.” Additionally, Skiba will continue to make new music and tour with the Alkaline Trio.

Official confirmation from the band is still pending, but they did confirm earlier today that they would be performing with Alkaline Trio’s Matt Skiba for their upcoming set at MUSINK Festival. We’ll keep updating this story as more details come in.