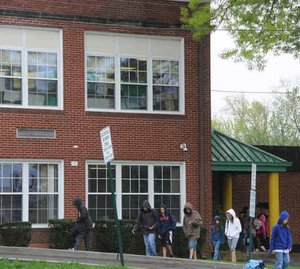 MAPLE SHADE, Pa. – When Janine Giandomenico’s son explained his school project to her, she dismissed his worries and figured she’d have to fork out a few bucks for poster board, magazines and a glue stick or two.

Then she read the letter that accompanied the project, over and over again, and believes that her son’s third-grade teacher at the Maude Wilkins Elementary School in Maple Shade, Pa, was asking the class, including the boys, to dress as women during a fashion show for a Women’s History Month project.

“I don’t see how a women’s fashion show, and asking my son, whether it’s dressing up in jeans and trousers or a dress, teaches anything about women’s history,” the 41-year-old township resident said yesterday morning. “Teach them about real people and about real things. Don’t turn into the Paris Hilton and the Kardashian channel.”

In a letter sent to parents on Monday, school principal Beth Norcia said that the event, scheduled for Friday, had been canceled and that there had been a “misconception” about the fashion show.

“It was never our intent to have boys dress as girls,” she wrote.

The initial letter describing the project, written by teacher Tonya Uibel, has been interpreted different ways by Giandomenico, the school district, and parents sitting in their cars outside the school yesterday afternoon. In the letter, Uibel said that the class had been learning about women in history in March and that “all students” must participate in the fashion-show project, which was a graded assignment.

“If your child is a young man, he does not have to wear a dress or skirt, as there are many time periods where women wore jeans, pants and trousers,” the letter reads. “However, each child must be able to express what time period their outfit is from. Most of all, your child should have fun creating their outfit and learning about how women’s clothing has changed!”

Giandomenico took that to mean her son could skip the dress but that he still would have to dress like a woman.

“I read it over and over. I had my family and friends read it,” she said. “There is nothing to misunderstand.”

The letter also came with a packet, describing in words and pictures, how women’s clothing had evolved through history from the constrictive attire of the Victorian era, to bell bottoms, to the big shirts and even bigger hair of the ’80s.

Norcia, in the letter sent home Monday, said the boys simply had to dress in a certain time period and not as women. The event was going to be videotaped and entered in a contest held every year by the Burlington County Advisory Council on Women, she said.

Last year, a school in Burlington Township gained international attention and scorn from conservative groups after a YouTube video was posted showing students there singing the praises of President Obama.

Giandomenico, a self-described “libertarian,” said she had tried to contact her son’s teacher about the issue, and claims her concerns were brushed off. She also tried to contact conservative radio hosts Glenn Beck and Michael Smerconish while broadcasting the issue to her nearly 900 Facebook friends.

“The school doesn’t get it,” she said. “I’m not a right-winger. I’m not a radical, but I believe in the Constitution and I believe in my parental rights.”

Calls to the school were referred to district Superintendent Michael Livengood. Despite the letter’s apparent call for boys to dress up in women’s clothing in some form, he said no one had called the school to complain about the issue and believes it is being blown out of proportion.

Livengood acknowledged, however, that the initial letter could have been “worded differently” in some parts.

“The letter home could have been worded in a better way, but it wasn’t,” he said. “Maple Shade schools are not trying to have boys cross-dress, that’s for sure.”

The timing of the fashion show coincided with the Gay, Lesbian and Straight Education Network’s “Day of Silence,” Giandomenico said, and she felt it was no coincidence. She said that she’s open to “alternative lifestyles” and has male friends who dress as women, but that it’s not something third- and fourth-grade students can handle, particularly her son, who has Asperger’s syndrome.

“I’m not freaked out by alternative lifestyles. It’s just the fact that the school system is trying to introduce alternative lifestyles in a sneaky way,” she said. “At 9 years old, I’m not ready to have the conversation with my son about homosexuals, lesbians and cross-dressing. When he’s ready, he’ll come and ask me.”

The fashion event was not affiliated with the “Day of Silence,” Livengood said. Several members of the Burlington County Advisory Council on Women, along with the township’s school board, did not return phone calls or e-mails for comment.

Outside the school yesterday afternoon, many parents said the fashion show faux pas had created another issue – angry little girls.

“My daughter is very upset that she’s not going to be getting to wear her dress,” said parent Lisa Jacoby.

Sandi Oliver said her niece, a third-grader at the school, had gone out and bought a new outfit to wear too.

“The whole thing is ridiculous,” she said.

The uproar over the event and its cancellation stinks of insecurity, parent Adrienne Pascale said.

“Your son is not instantly going to turn gay if he’s involved in a women’s fashion show,” she said.

Although one dad who asked not to be identified said only a “moron” could have interpreted the letter as a call to cross-dressing, Giandomenico said many parents, particularly men, in the blue-collar town agree with her.