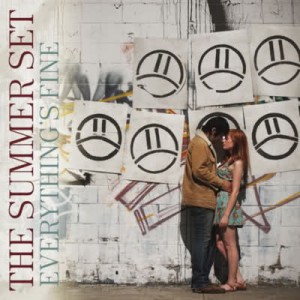 The Summer Set will release their sophomore full-length Everything’s Fine July 19th. The album was produced by John Fields (Jimmy Eat World, Andrew W.K.) and will feature eleven tracks. Speaking to Alternative Press about the upcoming release, guitarist John Gomez says, “The title is a bit sarcastic. Our first record was just one emotion. Everything’s Fine is yin and yang. We’ve had some ups and downs recently, some break-ups, some general trials and tribulations. This is a record that says we’re young, but growing up and experiencing new things. So in a way, it’s optimistic, too.”