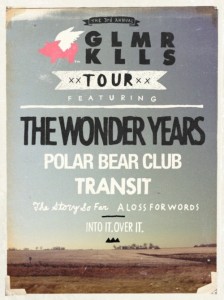 When the Glamour Kills tour sold out the Gramercy Theatre in less than week, it was clear that New York deserved a second show. This not only gave fans that originally missed out an opportunity to catch the tour, but also gave many the chance to see it twice one day.

Starting a show at 12:30 in the afternoon is no easy feat as both the bands and their fans seemed to just be waking up. Into It. Over It., aka Evan Weiss, kicked the day off with an acoustic set, unfortunately before half the attendees were even in the venue. He relied heavily on songs from his latest release, Proper, and told the crowd the story behind each song he played. Highlights of the set included the upbeat “An Evening With Ramsey Beyer” and fan favorite “Wicker Park”.

Taking things in the total opposite direction, The Story So Far blasted through their brand of hardcore-influenced pop punk tunes. The venue erupted and many who were unaware of what was about to happen quickly moved to the side upon seeing the intensity of the band’s fans. Pile-ons, moshing, crowd surfing – you name a kind of crowd activity and it was happening. “Daughters” and “Quicksand” got the best reactions during the set and it wouldn’t be surprising to see this young band headlining venues of this size by next year.

Up next was Transit, a band who have vastly broadened their music horizons over the years, making for an interesting mixed set. The newer songs were slower paced but still managed to keep the crowd going just as much as the old ones did. Vocalist Joe Boynton and guitarist/vocalist Tim Landers’ voices go together so well that it instantly draws you into the band’s performance. While songs like “Stays The Same” and “All Your Heart” had people moving, it was closer “Please, Head North” that garnered the greatest reaction.

If there were an award for most interactive band of the day, it would go to Polar Bear Club. Singer Jimmy Stadt really knows how to command a stage, pointing out audience members, giving directions, and singing his heart out. Whether it was the one-two punch of “Pawner” into “Killin’ It” or the anthem “Living Saints”, the crowd loved every minute of it. At one point a few people set up what can only be described as a human launching device, leading about forty people to crowd surf one after another. The set ended with “Most Miserable Life,” the lyrics holding true as the crowd sang together with all they had: “We f**cked our ears / We f**cked our throats / Screaming for the sake of what we love most.”

By the time The Wonder Years were ready to take the stage, the venue was packed and you could see the eager looks on everyone’s faces. Fans knew they were in for a treat, as this would be the first time the band played their album Suburbia I’ve Given You All And Now I’m Nothing in its entirety. The band flowed through the album almost effortlessly, only interrupting to thank the crowd and start a huge U.S.A chant. Singalongs and circle pits ensued and once the album was done, fans still wanted more. The band returned to the stage for a three-song encore of tracks from The Upsides, ending the show with the ever fitting “All My Friends Are In Bar Bands”.

Upon exiting, there was already a line in front of the venue as the next show was only about an hour away. Attendees flooded into the neighboring food establishments to get some sustenance before joining the line once again.

Once again Into It. Over It. took the stage just ten minutes after doors opened, this time around playing fewer songs but involving more banter. He had fun with the set, even having conversations with audience members and taking a fan request to play “22 Syllables”. The Story So Far were just as energetic as before, as were their fans, who repeated the same antics. The band switched up the order of the setlist and traded out “Closure” for “High Regard”, which went overwhelmingly well.

It seemed attendees were scattering about the venue a bit more at the evening show, perhaps because half of them were still feeling worn out from the matinee, but Transit seemed to get everyone’s spirits back up by providing a lively set. This time, older songs “Nameless” and “Stay Home” sent the crowd into a tizzy.

Polar Bear Club brought it even harder this time around, as they had promised they would at the matinee show. The crowd was enthusiastic about changes to the setlist such as the addition of “I’ll Never Leave New York”, one of the stronger tracks off their latest release  Clash Battle Guilt Pride. Stadt still kept up with the personal interaction, shouting out to a girl in a grey sweatshirt who was constantly crowd surfing. He asked the audience if they could go just as crazy as she was, and they immediately obliged. That crowd energy lasted throughout the rest of the show.

The Wonder Years  were not playing through a full album at the evening show, allowing them to play a mix of songs that spanned throughout their career. Starting with “Local Man Ruins Everything”, the band launched into a genuinely fun set, playing fan favorites like “My Last Semester”, “Came Out Swinging”, and “Won’t Be Pathetic Forever”, which was a nice addition from the band’s early years. Vocalist Dan “Soupy” Campbell gave a shout out to The Movielife and Brand New stating that without bands like them, The Wonder Years would never be able to play venues of the size of the Gramercy. The biggest surprise of the day came when the band came back for their encore and burst into “Living Room Song”, a b-side on the Japanese release of Suburbia. It was the first time the song had ever been played live and the die-hard fans were in awe of what was happening. The Wonder Years finished off the night with “You’re Not Salinger. Get Over It.” and “Bar Bands”.

As the crowded headed into the merchandise area, there were smiles all around. All the bands were there, just as enthusiastic to meet their fans as their fans were to meet them. The long day and double performances may have been hard on the bands, but one would have never known from the sight of how gracious they all were. The Glamour Kills tour is a diverse bill stretching across multiple genres in the alternative music scene, but maintains a sense of community through the bands’ do it yourself ethics and genuine connection with their fans.

Tags: Into It Over It, Polar Bear Club, The Story So Far, The Wonder Years, Transit