Quietdrive’s annual holiday concert at the Varsity Theater in Minneapolis never fails to be part show, part fiesta, and part friendly hangout.   Some of Minnesota’s favorite up and comers often open up; this year Quietdrive was preceded by Jamestown Story, All the Right Moves, and My Lady Four.  With all the holiday spirit in the air combined with the Minnesota’s trademark demeanor; happy faces, good moods, and high fives spanned every corner of the venue. It seemed that most concert attendees were not able to walk across the venue without stopping to talk to half a dozen friends on the way.   A good portion of the Minnesota music community made it out to support their friends and hometown heroes, and a much smaller portion came to simply enjoy the benefits of adult beverages. The atmosphere and mood were set at holiday spirit; Christmas lights adorned the stage, and the Varsity’s signature couches on the side of the venue were looking especially festive. Between sets, Home Alone was projected onto a drop down screen in front of the stage, in case the rest of the decorations suffice. 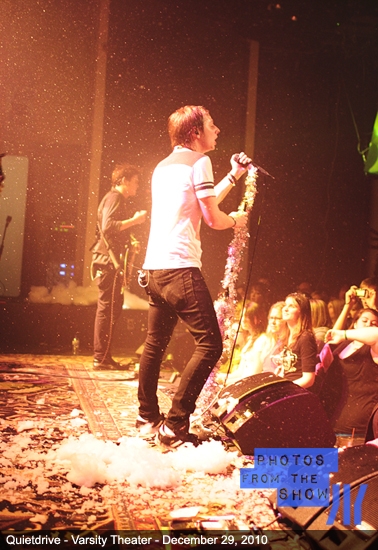 Jamestown Story, fronted by Dane Schmidt and his acoustic guitar, opened up the night with stellar jams accompanied by Brandyn Anderson tickling the keys.   This band has always been a cornerstone of the Minnesota music scene, and consistently writes catchy acoustic songs while involving other local musicians, such as Ryan Wickard (Take Cover), Stephen Jerzak, and Breanne Duren (Owl City).   In addition to the amazing personnel, they have an exceptionally solid live show.

Following Jamestown Story was pop-punk outfit My Lady Four.   Armed with a slew of new material and a new album in the works for later this year, singer Brian Schwarz and company played an energetic selection of songs.   With a dedicated fan base clearly apparent in the first few rows, My Lady Four fed off the audience and responded with a great set.

All The Right Moves is a pop/powerpop band also, of course, hailing from the Twin Cities area.     With a unique sound that showcases keys, guitars, and a violin; this band is clearly defining themselves as a creative bunch.   Another band that thrives off the audience, they played a very engaging set.

After the three quick openers, Quietdrive made its grand appearance.   In a set that consisted of no less than every fan favorite, a special appearance by ex-guitarist Matt Kirby, and two appearances of a ‘blizzard’ consisting of fake snow, Quietdrive certainly delivered.   Though performances in front of family and friends are often the most unnerving, the entire band put on a flawless show.   With lineup changes over the past year, it was the first holiday show with new guitarist Will Caesar and bassist Brice Niehaus, as Quietdrive parted ways with their previous bassist Droo Hastings.   Be sure to check out Quietdrive’s latest, self-titled album, which was released independently on December 14th.  A good time was certainly had by all, and for further proof – check out my photos here.