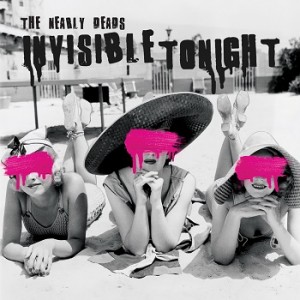 If The Nearly Deads’ infectious pop rock sounds familiar, you’ve probably heard their latest single “I Said” all over idobi Radio lately. You might have also caught them on MTVu, Fuse, or any of the other outlets whose heads they’ve been turning with their music. Not to mention the army of fans they’ve amassed in the process – their recent album and tour Kickstarter just closed out at over $13,000.

The band’s debut album Invisible Tonight, due out June 24th, balances pop hooks with a rock edge, and we’re stoked to be bringing you an exclusive stream of the whole thing today prior to its release next week. Check out what vocalist Theresa Jeane had to say about the album and stream it below!

We are very proud of this album. We have been through a lot of changes as a band over the past year, and at some points I found myself just wanting to give up. I felt like people wanted me to be invisible, and that my voice wasn’t being heard. Instead of letting it break me down, I turned that experience into something positive with the lyrics for ‘Invisible Tonight’. I’m declaring in front of everybody – this is hard, I don’t know if I have what it takes to do this sometimes, but that’s ok. It’s something you have to conquer in order to be successful. The concept for the artwork conveys that feeling of being anonymous.”

7. Point of No Return