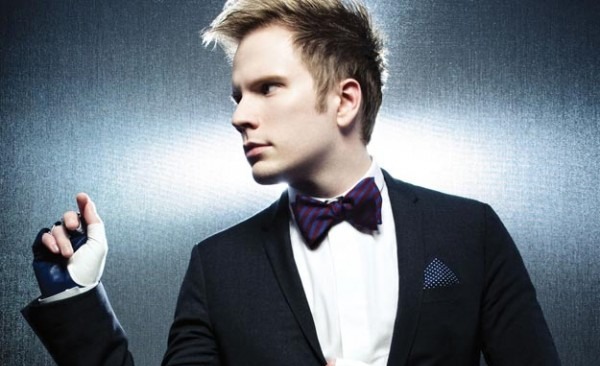 Patrick Stump has posted a blog entitled “We Liked You Better Fat: Confessions of a Pariah” reflecting on the challenges of moving forward post-Fall Out Boy. Read it below.

There’s this really nice piece at underthegunreview.net by Jacob Tender that a friend forwarded me today. It’s about how important Fall Out Boy’s album “From Under the Cork Tree,” was to him. After reading it though, nostalgic and well-written as it was, I really found myself more depressed than anything. It’s a complicated feeling, one that I’ve been incapable of explaining to anyone and have them fully understand. In spite of this though, I suppose I will give it the old-I-didn’t-go-to-college-try:

Tender had one line that really hit home for me. I related to it in terms of my feelings towards other artists, but I also winced at the profound implications it touched on in my own professional life:

“I didn’t like those pretentious assholes who didn’t like anything after Take This To Your Grave. I now recognize that I’m one of those assholes, but I still fume when some of my favorite records are so easily discredited by ignorant semi-listeners.”

The reality is that for a certain number of people, all I’ve ever done, all I ever will do, and all I ever had the capacity to do worth a damn was a record I began recording when I was 18 years old. That I can live with. That’s fine and fair; I have those records in my collection that seem to stand out far above the rest of my favorite artists catalogues (and especially for artists in whom I only have a passing interest). I suppose there’s nothing wrong in thinking I’m at a point in my life where it seems I’ll never catch up: If anyone’s going to appreciate the work I’m making, it won’t be until long after I’m done doing it. Again, this is fine: I’m insanely lucky to even imagine anyone ever appreciating anything I ever do, let alone in real time. Countless artists far better than I have only achieved posthumous acclaim. If I am to be obscure and financially unsuccessful, there’s nothing disheartening in that. The thing that’s more disheartening is the constant stream of insults I’m enduring in my financially unsuccessful obscurity.

Fall Out Boy’s last album Folie A Deux was our most critically panned and audiences openly hated it (it was also our poorest selling major label album even if one adjusts for the changing music economy). Now, that’s not to say it didn’t have its fans, but at no other point in my professional career was I nearly booed off stages for playing new songs. Touring on Folie was like being the last act at the Vaudville show: We were rotten vegetable targets in Clandestine hoodies.

That experience really took the wind out of the band’s sails; It stopped being fun. I suppose I’m just not that thick skinned. So perhaps it was even more ill-advised when I went out and did something I’d always wanted to do; make my album and have it released by Island Records [my solo record Soul Punk]. I coincidentally happened to achieve another goal which was to lose the weight I’d been carrying around since a month-long drinking binge after a bad breakup. Those accomplishments were happy things. Living in the moments of achieving them were perhaps among the happiest in my life.

So when I went out into the world to show off the self I felt like I was happiest and most comfortable being, I suppose I knew there would be the “Haters” [I loathe the clumsy/insufficient word but it seems the most universal]; The elitists that would always prove impossible to please. I had always been prepared for “Haters,” because there’s never been a moment since I graduated high school where I haven’t been the guy in “That Emo band.” First said emo band was dismissed as third rate pop-punk played by hardcore kids…a pale imitation of Saves the Day. Then we were swept up in the emo backlash [I really didn’t know we were an emo band…that’s not what the word meant a decade ago]. To this day my favorite writer at cracked.com will occasionally take swipes at my band as one of the worst things to come out of the 2000’s. We were a (albeit funny) running joke on an episode of Children’s Hospital.

Those examples of “Haters,” were people who never liked me (or at least never liked my music) and, by all rights, never really should. Such is the way of things. Different strokes for different folks as it were. What I wasn’t prepared for was the fervor of the hate from people who were ostensibly my own supporters (or at least supporters of something I had been part of). The barrage of “We liked you better fat,” the threatening letters to my home, the kids that paid for tickets to my solo shows to tell me how much I sucked without Fall Out Boy, that wasn’t something I suppose I was or ever will be ready for. That’s dedication. That’s real palpable anger. Add into that the economic risk I had taken [In short: I blew my nest egg on that record and touring in support of it] the hate really crushed me. The standard response to any complaints I could possibly have about my position in life seems to be “You poor sad multi-millionaire. I feel so sorry for you.”

Quite right, I still have access to enough money to live on in order to avoid bankruptcy for at least a few years as long as I stick to my budget, but money really isn’t everything and it never was. Perhaps those are the words of a privileged man who doesn’t really know what poverty really feels like. Again, that would be a fair rebuttal; I wasn’t raised rich, but lower middle class upbringing in early 90’s Midwest US of A is still a far way from the bread line. Still, there’s no amount of money in the world that makes one feel content with having no self respect. There’s no amount of money that makes you feel better when people think of you as a joke or a hack or a failure or ugly or stupid or morally empty.

This of course isn’t Tender’s fault. He never said anything negative and indeed only said great/supportive things. I guess I’m just angry because he illuminates why I’m a 27 has-been. I’m a touring artist and I feel I’ve become incapable of touring anymore with any act…whether I were to go out as a solo artist or do some Fall Out Boy “Reunion” [nope: Still never broke up] or start a new band…there will still be 10-20 percent of the audience there to tell me how shitty whatever it is I’m doing is and how much better the thing I used to do was. Not only that, but that 10-20 percent combined with whatever notoriety Fall Out Boy used to have prevents me from having the ability to start over from the bottom again. I can’t even go back to playing basement shows. As the saying goes: I couldn’t get booked at the opening of a letter.

It’s as though I’ve received some big cosmic sign that says I should disappear. So I’ve kind of disappeared. I know a lot of you have wondered where I’ve been. I’m sure others of you are disappointed to hear I’m still kicking around somewhere (kidding…sort of). But the truth is wherever and whoever I am, whoever I am whenever I release whatever release is my next, whoever said recording is recorded with: I will never be the kid from Take This To Your Grave again. And I’m deeply sorry that I can’t be, I truly am (no irony, no sarcasm). I hate waking up every morning knowing I’m disappointing so many people. I hate feeling like the awkward adult husk of a discarded once-cute child actor. I’m debating going back to school and learning a proper trade. It’s tempting to say I won’t ever play/tour/record again, but I think that’s probably just pent up poor-me emotional pessimism talking (I suppose can be excused of that though right? I am the guy from That Emo Band after all).

I’ve managed to cobble together some work…I’ve been moonlighting as a professional songwriter/producer for hire and I’ve even been doing a bit of acting here and there. I have no interest (and evidently that sentiment is reciprocated) in performing music publicly any time soon but as I’ve said I’m sure that will happen when it happens. I have been debating releasing the unfinished follow-up to Soul Punk. We’ll see what happens there. Still no word on Fall Out Boy…I know Joe’s working on his new record and Pete’s mixtape just came out so I don’t expect anything on that front in the near future. I, as always, would be super psyched to do the band again though. I’ve been watching a lot of Downton Abbey and I’ve finally caught up on the Office. Friends have been turning me on to all the records I’ve been too busy to listen to over the past couple years.

I do suggest reading Tender’s column if it sounds interesting to you; He’s a great writer and it’s a fun/relatable little story regardless of who the band is within it (film adaptations of Nick Hornby novels should be proof of that).