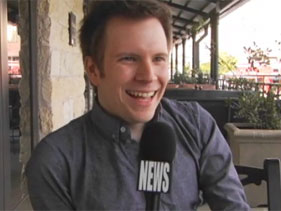 AUSTIN, Texas – It is 3:30 p.m. and Patrick Stump is sitting cross-legged on the balcony of his hotel, looking out on the Austin skyline with a smile on his face. He is wearing a gray button-up tucked into skintight black jeans. He looks ridiculously fit, not to mention pretty content. The smile never fades, not even for a second.

If you were to see him right now, you’d never guess that he’d be taking the stage for the first time as a solo artist, debuting songs from his upcoming album before a raucous South by Southwest crowd.

It is a very big deal, but Stump is anything but nervous.

“Well, I had a lot of coffee so my stomach is definitely battling it out. But I don’t know if that’s nervousness or what,” he laughs. “It’s going to be a bit strange, because this is my first show, and it’s at South by Southwest, and it’s opening for Hole. But it’s kind of a jump-into-the-deep-end kind of thing. I want to get it under my belt so I can move on.”

Oh yeah, we forgot the entire opening-for-Hole thing, but it’s true that Stump will debut his solo project on a bill that also features the roaring return of Courtney Love’s Hole – which only kind of adds another level of pressure to things. But to hear him tell it, Stump couldn’t wait to get onstage at the Dirty Dog Bar – and in keeping with the whole “solo artist” vibe, he went at it alone.

“Tonight I’m going to be playing everything myself. It’s something I’ve been wanting to do for a while. The video I posted online kind of foreshadowed it,” he says. “It’s kind of great because you can improvise with yourself. It’s way more complicated than I imagined it would be, so I kind of composed around it. I’ll have my guitar, and I’m going to try and play the saxophone, plus some other stuff. I didn’t bring the trumpet with me, but now I’m thinking I probably should have.”

So last night – and perhaps on dates down the road – Stump will be a regular one-man band. And yet, he was still not nervous. He knows expectations are high, and that one way or the other, more than a few Fall Out Boy fans might not like what they hear – but he’s itching to get his new music out there. And his March 19 SXSW gig is the first step in that direction. He’s so ready to go that he’s already written a review of his first show, which goes a little something like this:

“I think, my prediction is: I’m going to be very comfortable. I’m going to have a pretty good time. I’m going to screw up a couple of things, but I’ll get beyond it,” he smiles. “And, all the reviews will say I was nervous as hell.”