On the eleventh day of Christmas, social media became a little less important. 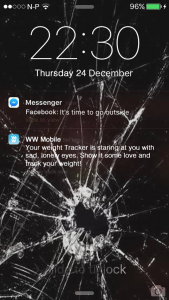 I hope all is well, especially with your health! Are you on Weight Watchers with Mrs. Clause yet? Why do I ask? Well, it was in the news recently that Oprah just purchased part of Weight Watchers and you seem to be a really big fan of Oprah. You give her loads of neat things every Christmas. Like TV networks, fame, and billions of dollars. Save some for us, eh? Anyways, although I’ve never believed in you, even as a child, I write this plea because as an atheist you’re the closest thing some of us have to an almighty deity.

This year for Christmas, please put an end to social media being so important in our day to day lives. It’s the first thing many of us look at when we wake up and the last thing we look at before bed. It’s almost as if we actually enjoy scrolling through our Facebook feeds, but none of us really do. We just do it. It’s becoming a bad habit that none of us can kick. Like eating ice cream after I brush my teeth at night. Except, replace ice cream with boring status updates and my rotting teeth with my soul slowly being syphoned into Mark Zuckerberg’s wallet.

I’m not saying I want social media to go away. It has its time and place and it can be fun. But the part that’s the most fun, sharing what’s on our minds and saying smart ass things, has become the part that’s not fun anymore. It has become ridiculously easy to say the wrong thing on social media. Say one little thing that offends someone and it can be career suicide when your boss finds out and asks you to resign. Back to Arby’s third-shift because of an Instagram sharing Justin Bieber nudes with a caption that includes an eggplant emoji.

Eddie
P.S. You should seriously consider signing up for Weight Watchers. Heart disease is coming down your chimney… and quick.