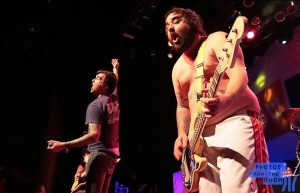 SAYREVILLE, N.J. – If it were NBA awards season, the sixth man award could have easily gone to the sold-out Starland Ballroom crowd Monday night, which sang every word from the opening band to the evening’s closer, “My Friends Over You.”

Outside the venue, the line wrapped around the building, as kids constantly shouted for New Found Glory and used their fingers to draw graffiti on the band’s dust covered tour bus. The doors had opened one hour before the opening band was to perform, and that was enough time for the capacity audience to fill the building.

“With the exception of Hellogoodbye, this crowd got rowdier and rowdier for each band,” concertgoer Michelle Kivlehan told idobi, when asked about her experience at the end of the evening.

There was little real estate left when Fireworks climbed on stage and got right into a ten song set list, consisting almost entirely of 2009’s All I Have to Offer is My Own Confusion as well as a cover of Philadelphia punk band Kid Dynamite. The band, fronted by lead singer David Mackinder, was a perfect choice to open for New Found Glory, as it provided a high-energy performance while encouraging the pit crowd to sing along. For a band that has only been touring for three years, the onstage energy and chemistry was astounding, and the masses surely obliged.

“We sometimes forget how big of a band we are touring with, but the show energy is the same regardless of crowd size,” Mackinder told idobi.

Citing hometown influences such as Negative Approach and the Suicide Machines, the band writes “very sincere songs” that pay homage to Detroit and its tight-knit music scene. The entire band was completely stoked that several hundred people knew the words, and its half hour set list was the perfect mood setter for the energy that had been growing the entire time.

It was good to see Hellogoodbye alive and well after all of the drama that has been happening with Drive Thru Records in recent years, and this band certainly knows how to entertain. Led by mastermind Forrest Kline, the California natives immediately made it aware that the new single “When We First Met” was available for free at the merchandise table and online, while promising that a new album was also in the works.

In the first appearance by HGB at the Starland Ballroom, the band acknowledged that it is rebuilding the popularity and fan base achieved with set closer “(Here) In Your Arms,” and is working hard to put out more new music for everyone to enjoy. Although the crowd was a bit more tame at this point than it was during the opening set, the band seemed to be having a great time on stage, musically on point and smiling through the entire 30-minute set.

The banner for Saves the Day had been hanging high above the onstage equipment since the doors to the venue opened, and supporters of the home state heroes knew what was up next as soon as Hellogoodbye finished up. The New Jersey boys got right to business, running through three songs before lead singer Chris Conley introduced the new incarnation of his band. The quartet sounded as good as ever with guitarist Arun Bali, bassist Rodrigo Palma and drummer Spencer Peterson looking comfortable and proper in their new roles. Conley spent little time within the 50-minute set interacting with the crowd, playing as many songs as possible, spanning the Saves the Day discography.

From opener “All Star Me” to curious but powerful closer “Kaleidoscope,” the crowd was ensnared by the infectious beat, moving and clapping in time with the music as though it was physically absorbing it. This was especially apparent when the chords were struck from oldies off of Can’t Slow Down and Through Being Cool.   The madness that ensued during songs like “Rocks Tonic Juice Magic,” “Holly Hox, Forget Me Nots” and “At Your Funeral” could only be topped by a band with the borderline psychotic amount of raw energy displayed during a New Found Glory live set.

The chants of “Ole! Ole Ole Ole!” shifted to “NFG! NFG!” as soon as the curtain dropped to reveal a banner celebrating the 10-year anniversary of New Found Glory. Those chants then shifted to sing along to the chorus of “Party in the USA,” which segued directly into a manic rendition of the entire self-titled record. The onstage interaction between the band members was utterly chaotic and the relationship between lead singer Jordan Pundik and the crowd could only be described as a combination of undying devotion and love. The words that were penned by guitarist Steve Klein 10 years ago still felt new and fresh when 2,000 people sang them along, jumping enough to cause the wooden floor to seem like a trampoline.

“It even makes it fresh for us, playing the self-titled record all the way through. Changing up the set like this keeps us on our toes,” bassist Ian Grushka told idobi in a pre-performance interview.

The eager fans were singing along with every word, and the fervor reached a peak during “Hit or Miss,” “Boy Crazy” and “Ballad for the Lost Romantics.”   Any of these songs would have been a perfect close to the show, but this was only the beginning.   After a quick, well-deserved breather, the band came back on stage with a new banner behind it and a second wind. Somehow everyone on stage kicked it up a notch and the crowd was even able to match Pundik’s level of insanity, as New Found Glory selected seven songs crosses Catalyst, Not Without A Fight and Sticks and Stones. The capacity audience was repeatedly instructed to stop resting, to keep moving, to open the biggest circle pit possible  — and the entire crowd loved every minute of every demand and every song.

“It doesn’t matter how big or how small a show is,”   guitarist Chad Glibert told idobi. “It’s about how much of an impact you have on people and how much they love your music.”