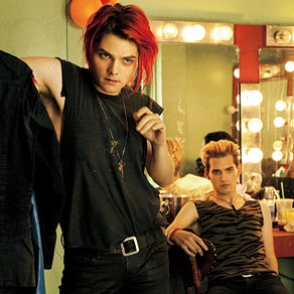 There’s something strange about Gerard Way up there in the spotlight, something new. It’s not just that the My Chemical Romance frontman has traded his usual elaborately layered stage outfits for snug black jeans and a shredded black T-shirt, revealing a torso that’s gone from chubby to Bowie-in-Berlin gaunt. It’s not just that he’s dyed his once-dark chin-length hair a crazed-clown red – a look that Way, 33, also rocked in his pre-fame teenage years, inspired by Kurt Cobain and Wayne Coyne.

No, what’s really odd – as My Chem power through new songs and old on Jimmy Kimmel Live‘s neon-studded outdoor stage on a brisk Hollywood night – is the jaunty, sexy thing Way is doing with his hips. It takes a few seconds to register, especially since he’s singing one of his older, angrier songs, “I’m Not Okay (I Promise)”: Is the 21st century’s most theatrically mopey rock star, the guy who, not long ago, sang about being “the savior of the broken, the beaten and the damned,” actually … dancing?

He is – and it’s all part of the plan. “In my head, that’s what I dreamed up,” Way says the next day, his hazel eyes lighting up at the mention of the moment. “I wanted the songs to mean something new. I wanted to feel free, I wanted to dance.” Appropriately, the songs on My Chem’s synth-infused new album, Danger Days: The True Lives of the Fabulous Killjoys, are the first to which dancing – rather than, say, headbanging, or weeping in the darkness of your suburban bedroom while silently cursing your parents – is a possible response.

With its hyperactive drum machines and laser-gun keyboards, Danger Days is the first My Chem record to capture the trashy energy of the comic books and sci-fi that the unabashedly dorky band members love. (Living out every 13-year-old nerd’s most preposterous fantasies, Way is both a rock hero and an award-winning comic-book creator, thanks to his whimsical Umbrella Academy series, soon to be a movie.) Says Way, “Me and the guys decided to hijack all this shit: We’re going to hijack beats, we’re going to hijack hip-hop, electronica, we’re going to hijack pop and pop art and use it all as a big art weapon.”

This article appeared in the December 23, 2010 – January 6, 2011 issue of Rolling Stone. The issue is available in the online archive.