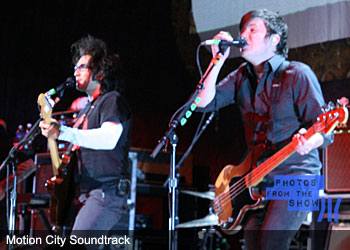 PITTSBURGH, Pa. — Appearances here can be deceiving, and in the case of Mr. Small’s Theatre, they are nothing short of subterfuge.

The dimmed studio lights that adorn the ceiling used to fill a once-hallowed room frequented by Sunday’s parishioners, but the veritable preachers of the evening were the members of Motion City Soundtrack.  With an atmosphere fit for only the best musicians, Mr. Small’s was the ideal venue for the band to really let the songs on its latest release explode.  A week into its tour for My Dinosaur Life, it played an energizing show that made the local college students and young hearts swoon.

Before the real action got started came the opening act, Michigan punk rock band The Swellers. But even its high-energy set complete with vital thrusts of head-bumping songs did not meet the standards that the Pittsburgh crowd seemed to have set unusually high that night. Some heads did began to sway upon the arrival of This Providence,  a pop-rock band with the musical strut and swagger to keep the fearsome tedium at bay.

“I want you guys to start moving,” frontman Daniel Young told the crowd, “because after all…this is a rock show.”

And suddenly waiting around for the headliner did not seem so routine.  An enthusiastic nod from the crowd went to San Francisco-based Set Your Goals, an ideal pop-punk choice for the Pittsburgh music scene which has always welcomed hardcore bands with open arms and gaping circle pits.

Finally, the opening acts had exhausted their time, and the wait was over. Motion City Soundtrack came on stage with a big bang, starting the night with its newest song, “Worker Bee.” Without hesitation, the band then hit the crowd with classics “My Favorite Accident” and “The Future Freaks Me Out.” Frontman Justin Pierre welcomed the help of 600 youthful voices unanimously singing along to the lyrics. Even the band could not contain the high excitement that seemed to have filled the room upon its arrival, with Pierre pumping his fists into the air multiple times and sporting a huge grin.

The band continued to light the night with some long-missed crowd pleasers from Commit This to Memory and I Am the Movie. Upon the first drum beats of “Perfect Teeth” the crowd went into a frenzy, and clearly the band’s fan base thoroughly enjoyed all the trips down memory lane. And for good reason, too — the dedication Motion City Soundtrack put into its work was clearly emanating from the stage, allowing each member to shine in the spotlight at particular times and causing a rippling effect throughout the overjoyed crowd. When the band came together in “When You’re Around” and “Attractive Today” it was to delightful adoration and rave reviews.

“It was a sick, dynamic performance. MCS really kicked it with the top-notch energy that the show seemed to lack in the first half of the night,” concertgoer Sara Faradji told idobi. “The band seemed to come to the rescue by playing their greatest classics.”

For the most part, band members focused on promoting the gems of their latest album, which debuted Jan. 19. With great gusto that could only come from experimenting with new material, their effort proved that songs such as “Pulp Fiction” and “A Lifeless Ordinary (Need a Little Help)” have lasting power on the stage. The fans reciprocated with an outpouring of support, making it clear that the aforementioned tracks were the indubitable standouts of My Dinosaur Life. And amidst the band’s renditions of its newest hits were frequent interactions with the crowd; at one point, Pierre and bassist Matt Taylor asked the audience to help them complete “Her Words Destroyed My Planet” with the sounds of kazoos and hums. Appropriately, the set ended with one of the band’s best anthems, “Everything is Alright.”

Evidently, Motion City Soundtrack is back in full force and ready to leave meaningful footprints on the year 2010. Its stop at one of Pittsburgh’s finest small music venues was greatly appreciated by the city’s youth and beyond, and so completes the first month of its surge into the new year with great success.  Excitement awaits the next few months for this band, arguably one of the best pop-rock outfits in the business.