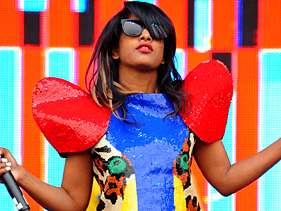 M.I.A. is known for her outspoken views, and in a new interview with British music magazine NME, the MC says she’s got a bone to pick with some of the latest pop culture trends, namely Lady Gaga and “Twilight.”

M.I.A., who is releasing her follow-up to 2007’s Kalalater this year, took issue with the fact that some people compare her eclectic style to Lady Gaga’s. In the interview she  accused Gaga of beinga “mimic” rather than making genuinely strange music.

“There’s Lady Gaga – people say we’re similar, that we both mix all these things in the pot and spit them out differently, but she spits it out exactly the same!”, M.I.A. said. “None of her music’s reflective of how weird she wants to be or thinks she is. She models herself on Grace Jones and Madonna, but the music sounds like 20-year-old Ibiza music, you know? She’s not progressive, but she’s a good mimic. She sounds more like me than I f—ing do!”

“That’s a talent and she’s got a great team behind her, but she’s the industry last’s stab at making itself important, saying, ‘You need our money behind you, the endorsements, the stadiums,’ ”  M.I.A. continued. “Respect to her, she’s keeping a hundred thousand people in work.”,

When asked about the state of record labels in the changing music industry these days, M.I.A. took another shot at Gaga.

“Are labels even interested in making money from music anymore? Lady Gaga plugs 15 things in her new video. Dude, she even plugs a burger!”, she said. “That’s probably how they’re making money right now – buying up the burger joint, putting the burger in a music video and making loads of burger money.”

And though the British Sri Lankan artist has always been very concerned with the visual element of her work, she said “it’s not like ‘Haus of Gaga.’ Me blindfolded with naked men feeding me apples and sh–.”

M.I.A. risked making other enemies in the pop-culture world by declaring that she had no interest in participating in a “Twilight” movie soundtrack.

“They asked me,” she revealed. “Luckily Jimmy Iovine, chairman of Interscope, had beef with the ‘Twilight’ people. So he stepped in and told them to f— off.”