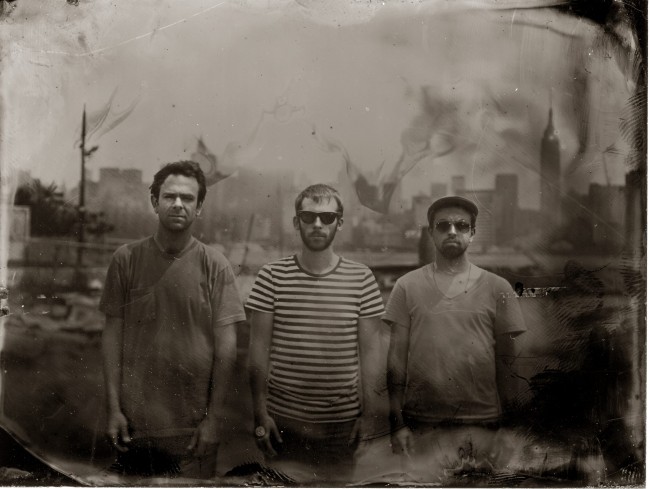 You can check out a new Jesse Lacey-produced track from Kevin Devine, titled “Private First Class,” over at AbsolutePunk. “Private First Class” comes from his upcoming record Bubblegum, which was funded by his highly successful Kickstarter, and will be released on October 15th. Also released that day is the second of 2 albums funded by that Kickstarter, titled Bulldozer. The two albums will sound drastically different, and in the spirit of this Kevin will embark on two different styles of tours to support them. The first is supporting  Bubblegum with Minneapolis’ (fantastic) Now, Now and Harrison Hudson, taking place this fall. A tour for Bulldozer will occur in 2014. For more details and to see the tour dates, you can view the press release below.

Brooklyn-based singer-songwriter Kevin Devine (Bad Books, Kevin Devine and the Goddamn Band), announces the release date for the highly anticipated dual release of Bulldozer and Bubblegum (previously known as LP7 and LP 8, respectively). The drastically different sounding albums, fan funded through a record-setting Kickstarter campaign, will be released Tuesday, Oct. 15, 2013. A fall tour with the Goddamn Band in support of Bubblegum begins Oct. 18 in Akron, OH with support from Now, Now and Harrison Hudson.

Earlier this year, Devine launched the Kickstarter campaign to fund the two releases with the goal of creating a solo album with Rob Schnapf (Elliott Smith, Beck, Guided by Voices) and a full band album with the Goddamn Band produced by rock group Brand New’s Jesse Lacey. The result was an overwhelming amount of support from fans, raising more than $114,000 to support the albums and subsequent tours — the 12th largest music project funded through Kickstarter to date. Both albums will be released on Devine’s Devinyl Records with support from Manchester Orchestra’s Favorite Gentleman Records and Brand New’s Procrastinate Music Traitors label.

“I’ve made six records. In America they’ve been released on five different labels. It’s a pretty unstable industry… What’s made it a sustainable and a justifiable career for me has been the audience and their close, passionate connection to the music,” said Devine on his choice to use Kickstarter.

Bubblegum, produced by Lacey, is a proper rock band record, a sound evolved from Devine’s early days in Miracle of 86; a charging record loaded with feedback, overdriven guitars and unexpectedly memorable hooks. The album was finished in April 2013, recorded at Dreamland Recording Studios in Hurley, NY and at Atomic Heart Studios in New York City.

The twelve songs on Bubblegum create a hard-driving, angular, and mature indie rock sound. Set to Pixie-like guitar riffs and socially conscious, politically bombastic lyrics, as evident on “Fiscal Cliff,” this is a side of Devine that screams and shouts itself over the feedback. “Nobel Prize” is a head-bouncing intro that captures the record’s relentless energy. “Private First Class,” based on the imprisonment of Bradley Manning for leaking classified documents in Iraq, is a surf/punk anthem of the highest-measure. But even high-octane rock records need to slow down, and Devine does so on tracks like “I Can’t Believe You” and “Red Bird” without losing consistency or steam.

The record’s most poppy tracks hit back to back with “Bloodhound,” “Bubblegum,” and “Sick of Words,” a catchy song that sounds as if Devine assembled Black Francis, Kim Deal, and Jackson Browne to back him–testament to the Goddamn Band’s musicianship provided by Mike Fadem (drums) and Mike Strandberg (guitar), with a debt to Lacey who also steps in on bass and percussion, and backup vocals.

The ten songs that comprise Bulldozer, Devine’s solo album laced with electric folk-rock and pop ballads, were recorded in L.A. from March to April 2013 and produced by frequent collaborator Schnapf. With Devine on guitar, Schnapf gathered a stellar group of musicians to back him–Russell Pollard and Elijah Thomson (Everest) on drums and bass, respectively; Isobel Campbell (Belle & Sebastian) on backup vocals; and Schnapf himself on guitar, mellotron, and percussion.

The commanding big sound of “Now: Navigate!” with its chiming guitars and tongue-in-cheek wordplay, is a stampede of power pop, as is the quintessential rock/pop sound of “Little Bulldozer.” Songs like “She Can See Me” bring out Devine’s punk rock roots.

“From Here” was written in the days after Hurricane Sandy when Devine put things on hold to volunteer around Staten Island, where he partially grew up, and Brooklyn, where he now lives. Primarily, he came to the aid of two close friends who had lost their homes in the hurricane. Devine aided in food and material drives and played in benefit concerts. On “For Eugene,” centered around the death of Eugene Contrubis, one of the many who drowned on Staten Island, Campbell lends her voice to add a moving layer to a song that swells to high emotional peaks.

Kevin Devine and the Goddamn Band will kick off a fall tour Oct. 18 in Akron in support of Bubblegum with support from Minneapolis-based indie rock band Now, Now and Nashville’s Harrison Hudson. A tour in support of Bulldozer will take place in 2014.