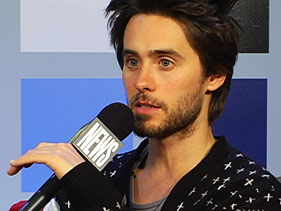 On Thursday, Jared Leto decided to hold an impromptu gathering of 30 Seconds to Mars fans at the Hive, the gallery/communal space he and his bandmates run on Melrose Avenue in Los Angeles. The plan was to treat them to a glimpse of “Artifact,” the 30 Seconds to Mars documentary he’s been working on for more than a year now.

The fans turned up in droves – so many gathered outside the Hive that the guys made the call to hold two or three screenings – and everything was proceeding as planned. Leto was standing on a small stage at the back of the space, thanking the first crowd for the generosity they showed in a recent auction the band held to benefit Haiti, when all of a sudden there was a loud banging on the door of the Hive. A man entered, wearing a hoodie and smoking a cigarette, holding a large package in his arms. He called out to Leto, then jumped on the stage, tossed the package to the floor and began ranting.

Footage of the incident has already made its way online, but on Friday, for the first time, Leto talked about the genuinely terrifying string of events that followed.

“There was a giant, really loud knock at the front door, and I joked, ‘Open it up,’ ” he explained. “Then a guy walks in with a giant package in his arms and everyone, including me, thought it was a joke.

“I thought it was a fan who had maybe brought a gift or something, but as he got closer, you could see he was giving off a different kind of energy. A few people in the crowd tried to stop him, because no one was really sure what his intentions were,” Leto continued. “He threw this big package down and it obviously had some weight to it, and addressed me by name and said he had a message for me and started reading out of a notebook. He was very incoherent and delusional.”

Leto tried to calm the man down, but when he showed no signs of stopping, he grabbed him and took him out the back door of the building. He said he tried to talk to the man to calm him down, but quickly realized that “he was not in a good place and obviously disturbed.”

“As I tried to talk to him, he got more and more aggressive. I saw he was not well, and then he started to read out of his book again, saying he had this message for me,” Leto said. “And in these circumstances, you get protective of fans and friends, so I was concerned a little. We were all cautious. He kept trying to push his way back in [to the building] but we stopped him. It was pretty surreal, but at the same time, I did feel some empathy [for him].”

Meanwhile, someone inside the Hive took the package and threw it out the back door. No one knew what was inside, but the situation appeared to be resolved – until word got back that the man had pulled up to the building with loud music blaring from his car and parked it right in the middle of Melrose. Then people got scared. And someone called the Los Angeles Police Department’s bomb squad.

“We did the screening and then, 20 minutes later, we got another knock on the door and it was the bomb squad saying they were clearing the area,” Leto said. “They ended up clearing five blocks of Melrose – streets were blocked off, they weren’t letting anyone in or out and then, all of a sudden, this guy walks down the street towards me and I told the police, ‘That’s the guy.’ ”

Police wrestled the man to the ground and asked him what was inside the package. According to Leto, the man replied that there were “some appliances … and maybe some explosives inside.” And then the bomb-sniffing dogs were brought in.

The man was taken into custody – the LAPD has not released his name – and an investigation into the matter is ongoing. It was revealed that the contents of the box were either “a blender and some candy” (according to one report) or some money (according to another).

Despite the incident, which Leto said was “definitely surreal,” he intends on finishing the screenings Friday night for fans who weren’t able to see the film. And through all of this, the only thing he wants to clear up is a report that, following the incident, he joked, “It’s official, we have the craziest fans in the world.” He wasn’t talking about the man with the package, but rather, one of his fans that managed to affix a 30STM sticker to the back of a police cruiser during the chaos.

“We have wonderful fans and what I said was taken out of context online. After police let everyone back in to the area, a number of people gathered outside and there were media outlets and cameras there too,” Leto explained. “And during all this, someone says that a fan had put a sticker on a police car, a 30 Seconds to Mars sticker, and I joked that we definitely have the craziest fans in the world. That was in reaction to the sticker, not the guy. I mean, someone put a sticker on a cop car in the middle of a bomb scare.”