Currently touring the US with Circa Survive and Foxy Shazam, Anberlin has been keeping busy.  With   new album Dark is the Way, Light is a Place under their belt and spirits higher than ever, idobi’s Matt Vogel was able to talk to lead singer Stephen Christian about their latest album and why they’ve experienced such success and  longevity  as a band.  The interview can be read below. 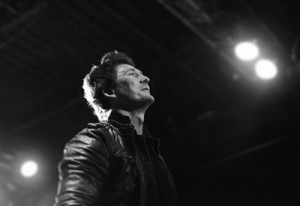 idobi : You guys just released your latest album in September, so it’s still fairly recent material.   How’s everything been panning out since then?

Stephen Christian : So far, so good. It’s been a lot of fun, just being able to push a record we really believe in.   We toured with Civil Twilight and Crash Kings right after it came out, and then played right up ‘til Christmas and then headed off on this tour. So it’s been an amazing run, especially with bands like Circa Survive, we’ve been wanting to tour with them forever, so it’s just about time.   It’s one of the best, if not the best record cycles we’ve ever been on. Just cause we really, really, love this record.

Compared to New Surrender, you guys had a little different approach in writing this album and getting it out.   I’ve heard before you went through a writer’s block,   went through member changes,   went to a new label and then released New Surrender shortly afterward.   How does the recording of your new album compare?

No relaxing! But were you able to center yourself a bit more after getting the album out?

Absolutely, especially with it being our most successful record to date, even though it’s our least favorite one. You know, we really felt like, “Okay, if we put out songs that we believe in, and songs that are actually, you know, really good, it would just be really great to put out a record that we know we have inside us.”   So I think that’s what it was for us, it was just all these years have just been adding up to build up to record this record with [producer] Brendan O’Brien, and put it out with Universal, and just everything aligned with this record.

“Feel Good Drag” ended up being your ‘big single’ and it almost seems that you guys are in between the scene and mainstream music. Is that an odd place to be in?

But we’ve always been in that odd place; you know when we came out with “Paperthin Hymn”, MTV and Fuse wouldn’t play it because they were like, “We don’t know what genre.”   Their quote, “This is too in-between genres,” is what Fuse said.   And it was like, at first it’s really frustrating, because you’re just like “okay, listen, we want a diverse audience, we don’t want just one audience.”   We don’t want to be pigeonholed here or here or here.   And then after a while I just started to enjoy it, because every audience is diverse; you have that guy that just heard you on the radio who just got off his nine-to-five, and then you’ve got some girl who’s fifteen, she’s hanging out with her friends, and you know, you have this whole wide variety of people coming to your shows, and as a musician, that’s what you want.   You want people to be into the music, not into the scene or the culture, or what’s cool, or what’s here today and gone tomorrow.   You want people to actually enjoy your music, and like your music, and like what you do.   You know, I don’t mind that it’s too in between genres, I’d rather enjoy it.   It’s branching out and a lot of people can listen to our music and our art.

I guess on a similar note, you guys have always had personal lives that you set aside from your art.   Obviously they blend together when you’re writing songs and everything, but you guys handle your personal issues well and keep things to yourselves.   I think that’s one thing people respect about you guys; you’re not about the drama, you’re about the music.   Spending so much time together, obviously conflicts are bound to happen, but how do you handle that and separate the two.

With the guys in the band right now, there is really no drama.   It’s very, very limited.   You know, the issues that we do have, or did have, have all been resolved. I mean, the more time you spend together the more time we realize that you’re just brothers.   After this kind of time, you know, eight years as a band, you kind of grow to adapt to each other and understand what person is going to do what.   So, you know, you’re just friends and sure, there’s going to be conflict, but, our conflicts lately are like, “I can’t believe you got regular chips, instead of, like, kettle corn chips.”   We understand that we have a lot more battles that are bigger than just what goes on between us, you know what I’m saying? And like, why don’t we help each other go out and fight those battles; whether it’s one of us financially can’t afford something, or someone’s having health issues, or someone in their family.   Why don’t we go fight something like that instead of fighting about who wrote what part in what song?   It doesn’t matter, the little stuff doesn’t matter.   I think that when we get outside of each other and try to not only portray but enact that hey we’re all on the same team, we’re all gonna fight.   What are you struggling with, what am I struggling with? Let’s go and tackle those issues. Those are a lot bigger, you know?   When one of the guys can’t afford rent, we all pitch in to help; it’s much more satisfying that saying, “Hey, look at my ego, it’s not filled today,” you know?   Just forget it, why don’t we go fight the bigger issues in life instead of worry about petty conflicts, and then overexpose them for the world to see so we can sell a few more records because people say, “Oh God, they have drama!”

I feel that that’s a great way to look at it, at least in comparison to the way some bands handle things.

I mean, I feel like those kind of bands that are into the drama and the talking and stuff like that, they get massive really fast, but then no one cares, because you’re just … it’s like a TV show. Everybody’s into a TV show but then after a while people are like, “Oh, this gets tiring,” you know what I’m saying? Everybody loves the instant drama, but they don’t want to hang out with the drama, and in ten years they don’t want to be a part of the drama.  They’re not going to show their grandkids ‘the drama’. At the end of the day, I think that’s why bands like us and Circa [Survive] are still here, you know, we’ve been in bands for over five years now.   It’s just like, we’ve seen hundreds of bands come and go.   And maybe they’ve got more success and fame, but they’re gone.   They all got part-time jobs at Pizza Hut.   For us, it’s just like, you stick to the music. You stick to what people enjoy. And you keep your hands clean, and you’ve got a chance to be around for a while.

On a little bit of a different note, you guys are headed to Australia in a month I believe … excited?

I’m so excited! Number one, Australia is amazing, but we are also going to Indonesia, China, and the Philippines, which we’ve never been before, so that’s going to be great.    And Singapore!

I hear Singapore is really cool.

You’ve been there before?

Yeah, we’ve been there a couple times … twice now. I enjoy it.

Well, anything else on the horizon beyond that?

Beyond that, we head off to go to Europe for like a month, and when we come back, hopefully, you know, we’d love to do a great spring tour or support tour.   I don’t know what’s going to happen, but we definitely want to concentrate this year on getting out of America.   You know, trying to get back to South America, and just maybe staying away for a little while.   And when we do play shows in the states, really make them count, and make them matter … and go out with bands that we love, like Circa Survive and Foxy Shazam.

Awesome, thank you so much!

You can purchase Anberlin’s latest album, Dark Is the Way, Light Is a Place, on iTunes here :