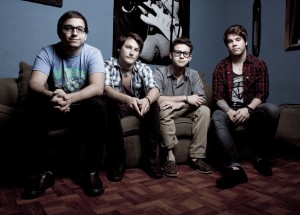 We got the chance to catch up with Broadway vocalist Misha Camacho before the band heads out on tour to talk about the road, their new album Gentlemen’s Brawl, and all the struggles of the past three years. Big thanks to Misha for the insightful interview and make sure to catch Broadway when they hit your city this fall!

You guys are about to head out on your first tour in almost two years, the aptly-named F#$%king Finally Tour. What are you the most excited and/or nervous about hitting the road again after such a long break?

MC: Nervous? Probably adjusting back to tour life. When you go on tour, especially at such a young age like we did, your whole life gets put on hold. But for the past two years we’ve been home, embracing our young adulthood, spending time with family. It’s been amazing. And now we’re about to be thrust back into the world on dollar menus and back aches. As for what we’re most excited for? The stage. Our first show in two years was about two months ago and it was unreal how much we missed playing for a crowd. Really put us back into the groove of things.

Long breaks have been somewhat of a theme of the past few years for you – there ended up being three years between your first record Kingdoms and Gentlemen’s Brawl. What was the hardest part of dealing with all the delays and everything that caused them?

I mean, the delays affected everything in our lives. Waiting for Kingdoms was one thing, but we were on tour most of the time and it always felt like something was being done towards its release. Waiting for Gentlemen’s Brawl was a complete nightmare for me. On one hand, it was recorded completely. We were waiting on someone else to finish it for about a year. And when you plan for a release, it’s a major part of your year and your plans for your life. You have obligations, you have to tour, and you have to support it. And the day your fans turn on you for something that wasn’t even your fault in the first place, let alone something that’s affected you more than anyone, it hurts a lot. I honestly felt like I was being gunned from every angle and there was nothing I could do to stop it. So my answer is officially, “It was not fun.”

A lot of bands might give up after being forced to deal with all that, but thankfully you guys stuck it out and pulled through. What was the number one thing that kept you going throughout everything?

There’s always pressure with sophomore albums, but you guys also had the additional pressure of there having been such a long wait since your first record. How did all that pressure affect the writing/recording process? Outside of that, how else did you approach this record differently?

Well, when we recorded Kingdoms, we were into a very niche scene of bands. We fed off their talent and enthusiasm, and Kingdoms is kind of an homage to them and what they created. Then we grew up a little. We became fans of so many more kinds of music. We stopped emulating and started creating. I matured as a writer and became able to really close in on what it is I want to write about – and more importantly, how to more effectively write about it. I’m more about connecting to people through our music now. Kingdoms was all about me and my problems. It was a very selfish way to write an album. I’m immensely proud of it as material, and in a way it does completely reflect who I was at the time. A young, reckless, selfish, excited individual. Now I write about my stories in ways that other people can more easily relate to. I cut out the fat of the who’s and when’s and now write about the positivity in whatever it is I’m going through.

Well, it was definitely a long time coming, but it’s finally here! What are you the most proud of about Gentlemen’s Brawl?

Can I say everything? This album is my baby. I watched it evolve over two years of writing, and it has such a relentless energy about it that really shows what we’re about.

From the reviews I’ve been reading, it seems like people are agreeing that it was worth the wait. How have you found the response so far, both critically and from fans?

It’s been incredible! We knew we were taking a big chance branching out like this, and to see some critics “get it” and thousands of fans eat it up was so amazingly vindicating. It’s really pumped us up. That’s not to say there weren’t folks who didn’t dig it. I feel like a lot of people grasped on to Kingdoms and projected their lives into it. They felt like our band was going to evolve the way they did, and our next album was going to be more of what we were in the past. Unfortunately that’s not what happened. I tried my best through Q&A’s and interviews to explain what GB was gonna be to our fans, but a lot of people seemed bummed. But we still play Kingdoms live. That’s still a part of who we are, so hopefully they stick around and maybe enjoy our next venture.

Is there any one song that you’re particularly proud of or have a special memory attached to?

The title song, “Gentlemen’s Brawl.” It was the first song I wrote for the album, and I imbued it with all the energy I had. I cannot wait to bring that energy to people live. When we played it at our hometown show (before it had ever been premiered) it was one of the songs the crowd went craziest for, right up there with our anthem “The Same Thing We Do Every Night Pinky”. I’ve watched tons of bands premiere new songs live, and the crowd usually examines more than reacts. But our crowd was all reacting and all energy. So that song holds a special place for me.

As difficult as it was, after everything you guys overcame to make this record, it’s clear that you’re not going to let anything get in the way of following your dreams. Now that the record’s out, what’s next on the horizon for you guys in both the near and distant future?

So much. We’ve been a band for about four years, and I honestly believe we’re just getting started. Wish I could be more specific, but we’re gonna focus on supporting this album and getting back to our fans.

Catch Broadway on the road this fall on the F#$%king Finally Tour, kicking off September 7th in Memphis, TN and wrapping up October 14th in Houston, TX. Dates and more info can be found at the band’s Facebook page.