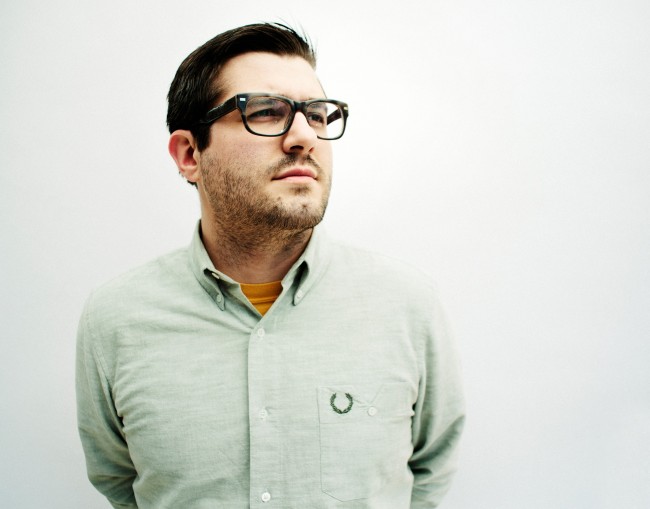 Evan Weiss is two months into what might be his biggest year yet under his solo project Into It. Over It., having recently released his second full-length  Intersections and embarking on his first headlining tour. idobi senior writer Catherine Yi caught up with Weiss at the Los Angeles stop to discuss the current tour, being on TV, experimenting on the new album, and more.

This is your first headlining tour as Into It. Over It. How does it feel to be finally headlining?

It’s scary [laughs]. It’s really terrifying. You’re in charge of so many people. You’re the ringleader of this entire group of bands from all over the country. The World Is [A Beautiful Place & I Am No Longer Afraid To Die] and A Great Big Pile Of Leaves are with us and it’s a huge amount of responsibility, but the shows have been great so far. It’s been a really rewarding and terrifying experience.

How did you go about deciding the setlist for this tour?

The band knows about 40 songs and we haven’t played the same set twice. We’ve been alternating out a lot of stuff. Tonight’s going to be a little quicker because it’s a shorter set, but we’ve been doing about anywhere between 17-22 songs a night, depending if people wanna hear more. It’s been cool getting to change it up and play some different stuff and touch on some things that we haven’t been able to touch on previous tours.

A lot of people consider this lineup the quintessential “emo revival” tour and they see you as like, the poster boy of this whole movement.

I mean, I don’t know about that, but if they’re saying that we are, that’s cool. I think that it’s just something I’ve been doing for a long time and I’m glad that in general, people are taking notice and are excited and are noticing the bands for what they are, which is hard-working and really great bands. So it’s nice getting some attention and some respect that I think has finally been due for years of busting our asses and playing around the country.

Speaking of which, you got to be on Carson Daly about a week ago. How was that?

Weird. Have you ever seen yourself on TV before?

No, actually I haven’t.

[laughs] It’s really crazy and surreal. The whole experience was really positive. I went to LA, met their staff, and we filmed the interview. It was a really great interview, they asked a bunch of awesome questions. It just became this really awesome thing. Friends that I haven’t spoken to in years were reaching out, “Hey, I saw you on TV!” It was really really cool, and no one was bummed, which was my favorite part. Everyone was just excited that that happened and I was able to say “Fuck” on national television [laughs].

Was it weird when it first came on TV and you’re like, “Oh that’s me”?

I was terrified. I wasn’t sure how they were going to edit it and what parts of the interview they were going to include and not include. Because basically, they took an hour-long interview and made it six minutes, so they really just chopped down a lot of content to make it this really cool, brief spotlight and it was really awesome.

With this tour, you have your whole band out this time. Do you usually prefer performing in a solo or full-band setting?

It’s different either way. The solo shows are cool because they’re intimate and goofy. I can talk and really connect on that level. The full band shows are awesome because we get to be loud and I can play the songs the way they’re actually supposed to be played. It’s way more fun for me to play loud, so I think in each scenario, it’s a little different. The setlists are different, the song choices are different. I could go both ways. Right now, I prefer playing with a band, because I haven’t done it a lot. Like this year has really been the first year where we’ve done it a lot and so that magic is still there for me. Plus I like the camaraderie. These guys are my best friends so it’s awesome getting to spend quality time with them and have this traveling family.

Your fans tend to be really attracted to your songwriting. What is your typical songwriting process like?

It’s just honest – it’s brutally honest storytelling. When I’m writing, I really sit, focus, and just work on it. It becomes the only thing that I’m focusing on or working on. I pick a series of stories or life events that have happened in recent memory and write them out. I don’t know, it’s pretty simple. It’s kinda hard to describe. I think that just like anybody else, I make it a priority and I want to work on it and make it sound awesome. When it comes to lyric writing it’s just brutally honest storytelling. I wish I had a better answer for that one.

Do you usually set aside time for it, or just whenever it comes naturally?

A combination of both. I definitely do set aside time, but some of my best ideas or ideas that I like the most are the ones that just happen naturally and I’m making notes in my phone and like humming ideas into my phone.

What did you try to do differently with Intersections?

So many different things. It was a different recording process. We were working on the songs one at a time, instead of working on the album as a whole. We were in a studio with a lot of great gear and a lot of different instruments so we got to try out a bunch of different ideas. We tried things that I haven’t gotten to do in previous recording sessions just because the studio we did it at had so much gear and so many options. I became a better keyboard player and I became comfortable with instruments that I had never played before. It was just basically trying out a different sonic palette than the other stuff. Proper wanted to be a rock record and this time I wanted it to be like a layered, textural, thick-sounding record.

Speaking of trying out a new sonic palette, one of my favorite songs on the new album is “A Curse Worth Believing,” but it has this minute-long intro of just straight feedback. I’m curious about your decision to add that to the song.

I love it. We were looking at it based on the record as a whole. The record starts with two really upbeat songs and then you want to change the vibe, but you don’t want to immediately jump into this new vibe. You want to ease into it and create this sense of ebb and flow with the record. Like, you opened with two really hard songs so you want to dial it down but in a way that can get people prepared for what’s about to come. Because if the song just started, it wouldn’t have the same impact. That was a big part of it. Plus, it’s a short song. In the grand scheme of things, once the song kicks in it’s only two minutes long, so getting people prepared for that vibe, for the change in the feel of the record and setting it up for the rest of it, it really helped to do it that way. And plus I just love listening to music like that.

You’re always in so many bands at the same time – Their / They’re / There recently released some new music as well. How do you balance all those projects?

It’s pretty easy. The other bands are really casual and more of just a fun outlet for everybody. Like the people in Their / They’re / There and the people in Pet Symmetry play in other bands too, so it’s something that we work on if we have the time, and if we don’t, then it’s not a big deal. It’s more of just like a fun project, but we’re also busy writing and working on material on our own. Then when we get together, it’s just this influx of ideas – they all just shoot out at once. It’s a great way for all of us to have bands that aren’t a total priority but that we can still have fun writing music together.

You’ve been a musician for a while. What keeps you motivated whenever you hit any bumps in the road?

It’s the only thing that I like to do. I couldn’t imagine doing anything else. I don’t want to have a job. I don’t want to be working on anything except music. So for me, even when I’m home, that’s all I’m working on. I’m playing music every single day, whether it’s with this or with other bands. So that’s the motivation, just that I love to do it.

You’ve had several interesting releases, like the 52 Weeks album you did a few years ago. Do you plan on having any more unorthodox releases or sticking to the album cycle?

I like doing the unorthodox stuff and there’s some new ideas planned for this year, which should be pretty different compared to the other things that I’ve done the last couple years. I’ve liked doing the full-lengths the last two years because it’s fun to make an album, and for the first three or four years of doing Into It. Over It. I hadn’t done that. But I don’t know, I kinda just do whatever I want, which is what makes it fun. I don’t have anybody telling me what to do so I can just keep churning out stuff at my own pace.

What do you have planned for the rest of the year?

I don’t really know yet. You’ll see. I’m sure I’m going to go home and there’s going to be a million to work on, so it should be cool.

Tags: Into It Over It