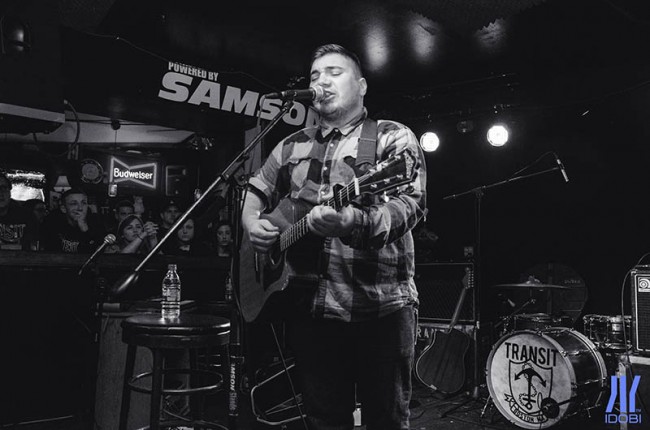 idobi writer Alexa Gallo had the chance to catch up with Jake Mcelfresh, aka Front Porch Step, at the Long Island stop of the Acoustic Basement Tour last month. The two discussed the release of his album Aware, persevering as an acoustic act, and the will to explore other music endeavors.

You released your first full-length Aware late last year on Pure Noise Records and it’d been received pretty well. Have you been surprised by the reaction?

It’s very humbling. I feel extremely blessed. I still don’t believe it. It’s weird to me that people listen to something I made and like it. It’s weird to hear people come to these shows and scream back my lyrics because I never thought they were great. It’s just me having fun and letting some emotions out. I’m extremely surprised and didn’t expect any of this whatsoever. I honestly thought the record was going to bomb. I cried at the end of the record talking about my Grandma. I didn’t know how people would take that, it was a very hard thing for me to do, but I decided if I was going to put out a record it was going to be completely honest.

The record definitely hits a lot of emotional spots. Is writing a therapy for you?

That’s exactly what it is. I’m really big on feeling a certain way and I have to write about it. For instance, on this tour, I missed my mom more than I’ve missed anyone in the world. So I’ve been writing this song about my mom that has a very deep meaning to it. It’s been helping me cope and get through without seeing her.

Prior to releasing your record through Pure Noise, you launched a campaign through Indiegogo that was successful. What are your thoughts on crowd funding and is this something you would do again in the future?

It’s very successful. I don’t know if I’d do it again – it depends on what point I’m at in the future. Obviously right now I don’t need to crowd fund. I got a lot of shit for crowd funding and most of it was from bands with five members. That’s five people, five incomes from their own jobs, and five different sets of parents. I didn’t have that. When you crowd fund, it’s not forcing anyone to do it; you’re saying, “Hey, if you like my music and you want to donate it’s here, it’s in front of you.” My lowest amount was you could donate a dollar and get your name listed in the thank you notes of the record, and I followed through with that; everyone got their rewards. I’m not ashamed of the fact that I had a very loyal support group that donated money to help me get where I am. That’s why I’m touring, that’s why I’m doing this. I’m not out here trying to get drunk and party – I’m here to embrace these people for and to give back to my fans.

The Acoustic Basement Tour has been your first extensive tour that you’ve done. How would you say the experience has been?

My first tour was in December with Never Shout Never and Nick Santino. It was only six dates, so it was like I got to do those shows and then go home. I went into this tour and it was complete strangers and now I consider everyone on this tour family. It’s really cool and I’m glad to have this experience.

Do you find it harder to push yourself being an acoustic act as opposed to being part of a band?

A lot of people have asked me if I’m afraid people will take me [being acoustic] weirdly or not like it as much. I have a very good secret in the way I handle my business, which is I do not give a fuck what anyone thinks about me. If you hate on me there’s no reason for me to care about your pettiness and I will eliminate your opinion. There’s a difference between constructive criticism and hate. I do it acoustic because I want to, because no one would ever be in a band with me. Would I want a band in the future? Very much so.  There’s a lot of power I have holding back that I can’t let out on an acoustic guitar, but right now I’m fine as a solo project.

Have you ever tried dabbling into different forms of music?

I’ve always wanted to do vocals for a hardcore band. I’ve always wanted to do a hip hop project and an R&B project. I want to do everything. I’m purely in love with music. My entire computer, my entire head is stocked with lyrics for a hardcore band and a rap project. I rap just as much as I sing acoustic – I just don’t do it out in the open. I’ve considered doing some spoken word projects. It’s all up in the air right now. I do what I feel like is the best I can do and the best product that can come out of me.

And what is the rest of the year looking like for Front Porch Step?

I’ll be playing Today’s Mixtape Festival here and Southeast Beast in Florida. Other than that I have announcements out the ass that I cannot share with you yet. I’m very shakingly nervous, but ultimately excited about what’s ahead for this year.