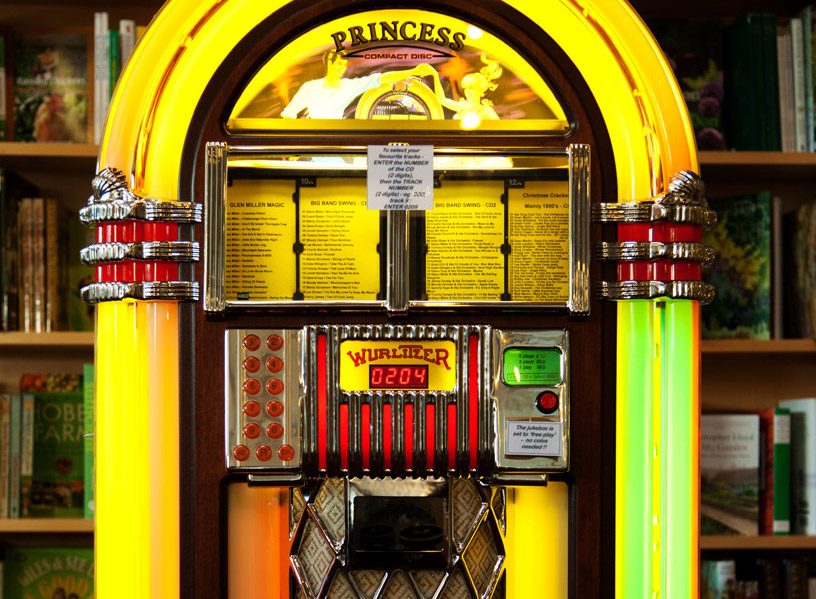 You’re in a diner. The kind of place where the steaks are fried. The mac & cheese is the exact same color and consistency as marshmallow Peeps. Somehow it all tastes amazing. There’s a server in a striped apron who calls everybody “honeypie.” She slams your food down so hard the table shifts. That’s when you notice it. That chromed out, red, green, and yellow glass, music machine. It’s straight out of another era. You can’t resist. You ask Honeypie for a stack of nickels. She complies. The jingle of the coins sounds sweet as you drop them into the slot, one by one. Then, you let the music play. What’s the diner called? It’s The Signal Boost. And this is the Inbox Jukebox:
—

Make sure to grab your shades and your best floral shirt, because hitting play on this next track will take you on a VACAY to somewhere eternally sunny. The singer/songwriter’s new track “Shoes” is a sweet and emotional tale about a girl he had a crush on from his old job. It rightfully belongs on a late 80s soundtrack, and definitely belongs in your headphones.

Get ready for a blast of pop rock from across the pond—British quintet Tigress have just announced their new EP Like It Is will be out on May 12th via LAB Records. Get a taste of what’s to come with their most recent single “Power Lines”, and try to stop yourself from drumming along on your desk at work (your boss will understand).

This is delightfully weird, and we’re good with that. Stay tuned for more good, weird, and generally awesome with Adrian Underhill’s upcoming debut album, due out later this year on Indica Records.

What’s that sound? Oh, it’s just the sound of a supergroup blasting its way back into your speakers for the first time in five years. You can now hear Chickenfoot’s brand new track “Divine Termination”, which is spearheading the upcoming best of collection BEST + LIVE. Joe Satriani himself says the track is “bone crunching, hell raising rock, dripping with attitude and vibe. Just the way Chickenfoot likes it!” That’s right—Chickenfoot is made up of frontman Sammy Hagar, guitarist Joe Satriani, bassist Michael Anthony of Van Halen, and Red Hot Chili Peppers’ drummer Chad Smith. Bow down to the rock gods and mark your calendars for the collection’s release on March 10.