If you’re an anime lover like me, this probably has you in a giant tizzy—I am so excited about this movie. (Granted I haven’t finished the series yet because I never have time to breathe anymore, but I’m working on it.) Attack On Titan itself has become a cult-classic turned mainstream anime phenomenon that I’ve been working on for two years. But it’s the most heart-wrenching, tear-inducing, make a grown man cry openly without embarrassment anime you will ever see–it’s so worth taking a peek at the live action version. If you love anime, and good live-action adaptations, watch below! (It’s in Japanese, and has some weird TV overlays, but it’s still awesome.)
https://www.youtube.com/watch?v=x4vO2GRnlFc

Andy Biersack and Juliet Simms Are Busy Being Perfect Humans

Andy and Juliet have been one of the scene’s biggest “it” couples for a very long time, and like anyone in the scene, they strive to do better. So they set a goal, and they’re achieving it. In just one day they raised $15,000 dollars to be split between the It Gets Better Tour, and the Alive Music Projects. 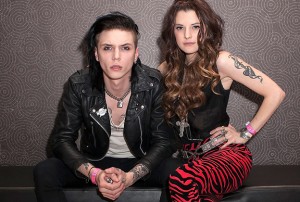 Both of these are programs of The Gay Men’s Chorus Los Angeles. What’s even better than that? The prize. Not only are they raising money for fantastic causes, but they’re also offering a ride along on their bus from Seattle to Portland on Warped, and you get to hang out with them BOTH days. In conclusion, they’re not just an awesome couple filled with love for their fans, but they’re an awesome couple to everyone and we should all aspire to be more like them. You know, and find people in our own lives who help us to do better and be better.

So Ryan Scott Graham, also known as the bassist of State Champs, and Vine 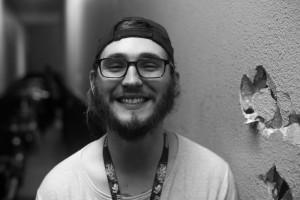 star extraordinaire also has a band/project/perfectly amazing acoustic project called Speak Low If You Speak Love, and he released a new song this week called “Have My Head.” I don’t think this (or State Champs) get enough attention, so this is me ordering all of you to listen to this Vine star and social media mogul’s acoustic effort. Check him out on Warped this summer!

Usually, I post five stories a week… but this week I have a bit of a stronger opinion. Zayn Malik left One Direction’s tour, and as a scene, we probably don’t care, but we should. We should care not because he’s in One Direction but because of the reason he left. 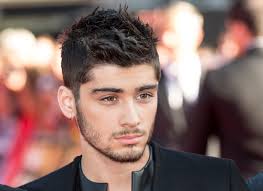 Zayn’s statement through their “people” was that he was suffering from anxiety over recent rumors of the media. Why should we care? Because this is an entitlement that we believe we have to the personal lives of the people in our scene. I’ve watched it happen for a long time, and even participated at some points, but I’ve also realized… nothing but what an artist puts out there about their personal life is any of my business. This applies to a lot of things—especially our scene. We have a habit of setting trends in the music industry, even if we don’t realize it. Whether its credited to us or not, but we shaped a lot of the ways major bands use social media. We owe it to ourselves, our bands, our heroes, and the world at large to start taking a stand against media takeovers. Don’t give into rumors. Don’t go on Tumblr sites that promote spreading vicious rumors. Stop caring more about who is dating who, and care about the music. What happened with One Direction this week could happen to anyone who regularly tours, records, and is never home. It can happen to anyone who can’t defend themselves. A lot of our own scene big-timers have made it into the tabloids for things that are far from the truth. This isn’t entertainment. It’s bullying, human cockfighting, and everything we as a scene stand against in the lives of everyday humans, and should stand against in the lives of those we admire. Gossip isn’t news, nor is it entertainment. It’s not what’s important. The music, the fans, and the family are what’s important.