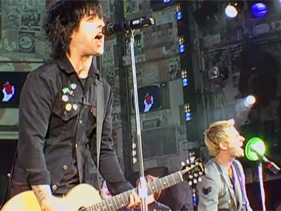 “This is my first night on Broadway,” frontman Billie Joe Armstrong announced as his two bandmates, bassist Mike Dirnt and drummer TrÃ© Cool, took their places behind him.

The band  quickly ripped into a blistering performance of “American Idiot,” the first single from the album of the same name that serves as the basis for the musical. The adoring audience went berserk and rushed the stage in order to get a little closer to the band they adore.

Clearly, the performance was as surprising to the cast as it was to the crowd, as the actors, still onstage from their curtain call, joined in the bedlam. They broke out video cameras and snapped photos. One actor crowd-surfed over the audience as Armstrong encouraged the crowd to pump their fists in the air during the song’s bridge.

Once  Green Day  finished “American Idiot,” Cool tossed his sticks into the crowd and Armstrong waved to the fans. But the energized theatergoers would not let the band leave so soon, so Armstrong raised one finger to indicate they had one more number in them.

Armstrong ripped into the opening chords of “Basket Case” (the massive single from the band’s  breakthrough album Dookie, which is not included in the stage musical), once again sending the crowd into a frenzy. For a brief moment, it seemed like a mosh pit was going break out. Instead, it turned into the ultimate punk-rock singalong, with both the crowd and the cast shouting every word right along with Armstrong.

When the song wrapped, the band took its final bow with the cast. Everyone received a standing ovation from the adoring crowd, ending an unexpectedly transcendent night of rock and theater.